Employers saw only a tiny increase in enrollment in their health insurance plans this year, even as key provisions of the health law — including a requirement that nearly all Americans carry coverage or face a fine — went into effect, a survey by benefit firm Mercer finds.

Additionally, the percentage of workers eligible for job-based coverage rose only minimally, suggesting that employers didn’t expand their programs. This may reflect a one-year delay in rules requiring employers of 50 or more to offer insurance to full time workers or face penalties. In February, the Obama administration gave firms with 50 to 99 workers until 2016 to comply.

“What was most surprising was that we did not see much growth in [employer plan] enrollment,” said Beth Umland, director of research for health and benefits at Mercer. “It may just be pushed off until 2015, or employers are finding ways to have a soft landing around enrollment growth.”

She also speculated that the penalty for Americans who don’t have coverage — $95 or 1 percent of income this year, whichever is greater — may not be high enough to prompt some workers to enroll in coverage they are offered. In addition, some may not choose to enroll in an employer plan because they have coverage through a spouse or another program.

Across the 700 firms chosen at random for the survey, average enrollment grew from 69.1 percent of workers last year to 69.3 percent. Meanwhile, the average percent of employees eligible for coverage grew from 84.9 in 2013 to 85.2 this year.  The survey also found:

Spousal surcharges are a way for employers to avoid costly coverage that other employers could shoulder. A few firms won’t cover spouses that have other coverage options at all, a move made by UPS last year.  But the Mercer survey found that only 8 percent of firms bar spouses altogether.

Paul Fronstin, a senior research associate at the nonpartisan Employee Benefit Research Institute in Washington, D.C., said that’s not surprising because such limits have a much smaller impact on employer costs than changing premiums, copays or deductibles.

The Mercer survey noted employers attempting to control costs in those ways as well, saying 32 percent of employers surveyed raised deductibles or other cost sharing provisions for workers, while 33 percent are trying to steer more employees into high-deductible plans.

The survey was conducted for two weeks in January and was a random sample of employers across all size ranges, including some Mercer clients. 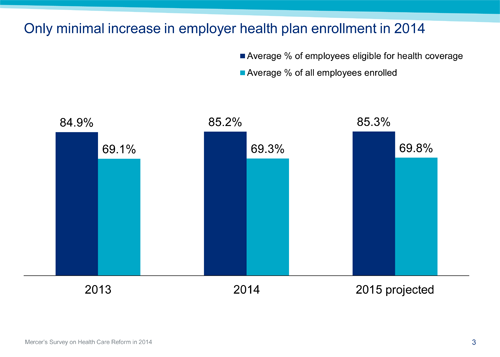