California and Washington state will require coverage of acupuncture. Arkansas wants prevention counseling for women at high risk of breast cancer but not coverage of expensive infertility treatment. 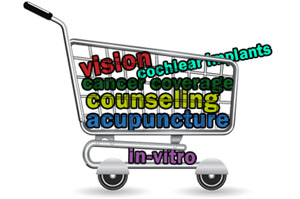 Oregon opted against covering bariatric surgery for obesity but insurers will have to cover cochlear implants for hearing.

These are some of the decisions states have made as they determine what minimum insurance benefits millions of their residents will be entitled to in 2014 under the federal health law.

The decisions – which affect people who will buy individual and small group policies — are being closely watched because they’ll determine how comprehensive the plans are and affect how much they cost.

Insurers can offer richer benefit plans to those willing to pay higher prices.

With a Monday target for submitting their lists of “essential health benefits” to the federal government, 16 states and the District of Columbia have made their choices and 16 more states are expected to do so in the next few weeks, according to consulting firm Avalere Health.

The health law lists 10 broad categories of essential benefits, including preventive care, emergency services, maternity care, hospital and doctors’ services, and prescription drugs.  States have latitude within those categories, and so far nearly all have selected as a benchmark for minimum coverage one of the three most popular small group health plans available to residents now. Because these plans vary and states can tinker with specific benefits to comply with federal requirements, the minimum benefits available to consumers in California will be different from those for people in New York, for example.

Essential benefit requirements apply to individual and small group plans sold within and outside the new online, state-based exchanges scheduled to launch in 2014. The requirements also apply to benefits provided to the population that will be newly eligible for Medicaid coverage. These requirements do not apply to self-insured health plans, which is how most large companies cover their employees.

By selecting among the most popular small group plans already being sold, states are trying to minimize disruption to the insurance marketplace. This strategy also allows states to maintain health benefits they have been requiring insurers to offer.

That’s good news for disease advocacy groups which had feared losing coverage for such services as mammograms and autism treatment – coverage they have previously persuaded states to adopt. Some advocates remain disappointed, however, that there won’t be a uniform, nationwide set of essential benefits.

“We’re pleased to see states choosing benchmark plans that will preserve cancer coverage guarantees that we have fought hard to enact at the state level,” said Stephen Finan, senior director of policy of the American Cancer Society Cancer Action Network. “But we remain committed to urging a national standard that ensures a consistent level of quality coverage for people with cancer in any state.”

Sonya Schwartz, program director at the nonpartisan think tank National Academy for State Health Policy, lamented a “missed opportunity.” She said states could have been more innovative rather than locking in minimum benefits based on what was sold to most customers in 2012.  But she noted states were hesitant to make major changes and were careful not to go beyond the 10 categories of minimum benefits called for in the law or else consumers would be on the hook for those costs.

Although many advocates say the Obama administration should have been more prescriptive, giving states more leeway helped to quell concerns the health law would force people into federally-dictated coverage and undo decades of state oversight of the industry.

States could select a benchmark benefit package based on what was covered by:

* One of the three largest small-group plans in the state

* One of the three largest health plans for state employees

If a state does not choose, the benchmark will be the largest small group plan in the state. Some states where officials opposed the health law, such as Virginia, have moved ahead on essential benefits.

Maryland and Utah are the only states that have chosen one of their state employee health plans as a benchmark.

Schwartz said while benefits in 2014 will look largely similar to those today, she noted the law ensures coverage for mental health, prescription drugs and maternity services which are not guaranteed in all individual and small group policies today.

States are still waiting for more guidance from the administration on how to define habilitative services — one of the benefits covered in the law — and whether the federal government will require plans to offer more than one prescription drug in each class of drugs, said Caroline Pearson, a director at Avalere Health. Habilitative services differ from rehabilitation in that the patient is learning a new skill, such as walking for the first time, rather than having a former function restored.

This story was updated at 9:30 a.m. on Oct. 1 to update the number of states that have already made their essential health benefit choices.