Estes Park, Colorado, is weathering a tough season. Seven weeks ago floods wiped out all but one road into the small, tourism-dependent community adjacent to Rocky Mountain National Park. Hotels and businesses were just getting cleaned up and the town was hoping to salvage some kind of fall color season, when the government shutdown hit, closing the park for ten days.

The flood and the big drop in business also affected Estes Park’s small but important hospital, which has resorted to flying some of its doctors and nurses in by helicopter to meet medical needs. 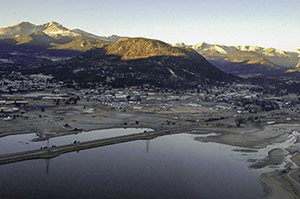 Estes Park and roads leading into the city were devastated by September floods (Photo by Eric Whitney).

Estes Park resident Beverly Henderson, 80, came to the hospital for a routine pacemaker check last week. These routine exams are back on track at Estes Park Medical Center now that cardiac doctors and nurses no longer have to face a three-and-a-half hour, one-way drive from the valley below where most of the medical staff live.

It’s the kind of drive that patients like Henderson would have a hard time doing themselves if the doctors and nurses couldn’t make it up the mountain.

“I’m an old lady!” Henderson said. “I hardly ever go to the valley, mostly because I’d probably get lost in all the roundabouts at the medical facility there.”

Estes Park hospital’s chief doctor, Martin Koschnitzke, is glad the hospital can be there for its patients, but he says it isn’t easy. Like the rest of the town, the hospital depends on a certain level of tourist traffic to pay its bills, and Estes Park’s tourism economy has been pummeled lately.

“We took a hit from last summer, [because when] we had the fires, a lot of people chose not to travel here,” said Koschnitzke. “We were just starting to rebound, and then the flood hit. And then the government shuts down and we lose the national park, and the road.”

The town felt beleaguered, he says: “It’s one thing to be down, it’s another to be kicked several times when you are down, and that’s how we felt.”

Koschnitzke is very happy that the nearest big hospital, Medical Center of the Rockies in Loveland, is willing to fly some of its specialists in three days a week to keep seeing their regular patients. These are patients who normally would make the trip down to the valley when it was a one-hour drive.

Cardiologist Dr. Chad Stoltz now commutes via helicopter, a ride that takes him directly over the narrow canyon, with its river and the highway that he used to drive up. Today, that highway is crawling with yellow bulldozers, backhoes and road graders, furiously trying to fix it before winter snows hit. Stoltz appreciates the new perspective from the air.

“I can’t tell you how many times I almost crashed [when driving] because I’m staring in the river, looking at my fishing holes,” Stoltz said. “To see it from above is just wonderful, and I do believe I found a couple more fishing holes I missed before.”

But it’s not all fun and games. Stoltz says his new flying commute allows him to both maintain continuity with his regular Estes Park patients and still be able to be on call down in the valley in the evenings. But the flights aren’t cheap.

Russ Wooley, a vice president at the hospital in Loveland, said the helicopter costs about $5,000 a week and the hospital is paying it. Everyone is hoping that road crews will be able to restore one of the highway routes back in to Estes Park by Dec. 1 as projected.

“This decision was not made lightly,” Wooley said. “This is a temporary measure. The physicians know that, the community knows that. It certainly isn’t something we can sustain over the long term.”

In the meantime, Estes Park’s hospital is struggling to maintain 100 percent of its services when a lack of tourists means patient volume is still down sharply. The 25-bed hospital lost about $700,000 in September alone. Estes Park hospital’s Koschnitzke doesn’t have complete numbers for October yet, but he says expenses are still higher than normal, and cash-generating emergency room visits remain down about 5 percent.

“That’s a big deal for a small institution,” Koschnitzke said. “We’re still providing some housing, some transportation and some meals for a few employees who are still commuting long distance.” That’s likely to continue until at least one of the highways is reopened, he said.

So far, the weather has held and road crews have been able to make good progress rebuilding the highways to Estes Park. That’s going to need to remain true for at least another month for the hospital to get its revenues and expenses back to normal.

Correction: An earlier version of this story misidentified Dr. Koschnitzke. His first name is Martin, not Frank.

This piece is part of a collaboration that includes NPR and Kaiser Health News.

Help Flies In For Troubled Hospital In Estes Park, Colo.