CONNELLSVILLE, Penn. — Judy Keller, 69, has always relied on Highlands Hospital for medical care, just as her parents did before her. When she walks through the halls, she recognizes faces from the community and even from her days working as a school teacher. The 64-bed facility, she says, is a mainstay of this rural Southwest Pennsylvania town.

“This hospital all my life has been here,” said Keller, now retired. “[It] helps a lot of people who don’t have adequate health care coverage — and I don’t know what they would do without it.” Aside from providing health care to a largely poor population, it provides hundreds of jobs in a town that locals say never recovered after industries such as coal mining and glass manufacturing disappeared.

But in the wake of this fall’s presidential election, Highlands — like many other rural hospitals — will likely face new financial challenges that will intensify longstanding struggles, experts say. The Affordable Care Act, which President-elect Donald Trump has vowed to repeal, threw a number of life-savers to these vital but financially troubled centers.  And its full repeal, without a comparable and viable replacement, could signal their death knell.

Highlands provides one window into how some of these shifts could reverberate in small towns across the country. And ironically, 64 percent of people here in Fayette County — one of the state’s poorest — voted for Trump. Pennsylvania, which has the third largest rural population in the nation, played a pivotal role in his upset victory this fall.

The health care law expanded Medicaid to tens of thousands of previously uninsured patients, providing new revenue streams for rural hospitals, which often serve a poorer, sicker patient population. The law also created a program that allowed some of these facilities to buy prescription drugs at a discount, though Highlands qualified for that program independently of Obamacare.

“All these rural hospitals are operating on thin margins. The removal of any income source or coverage, or expansion of bad debt, is going to create significant financial hardship,” said Alan Morgan, CEO of the National Rural Health Association.

Rural hospitals have long operated on the edge. In the past six years, more than 70 such facilities have closed, citing financial duress. Almost 700 more have been deemed at risk of following the same path. Meanwhile, the need for reliable health care remains pressing. Conditions such as heart and lung disease are widespread in rural areas. Addiction to the prescription painkillers known as opioids is acute. Nationally, the Medicaid expansion offered a bit of stability for some rural hospitals at risk of closure. Researchers say it disproportionately benefited such facilities — particularly here and other states with large rural populations, such as  Illinois, Kentucky and Michigan.

In Pennsylvania, 625,000 people enrolled in the expanded Medicaid program. Close to 300,000 came from rural areas, said Andy Carter, president of the Hospital and Health System Association of Pennsylvania. As of October, about 42,700 of Fayette’s residents had Medicaid, according to state data, an increase of about 8 percent from 39,460 in June 2015. (Pennsylvania‘s Medicaid expansion took effect in January of that year.) That’s close to one-third of the county’s population.

Despite that, Highlands CFO Andursky said he barely noticed the increase — the threat of closure is a “daily concern,” he said. “It seems like you’re taking two steps forward, three steps back,” Andursky said. “It’s not like I can look to five years out — because I have to worry about tomorrow. I can’t worry about next year.” 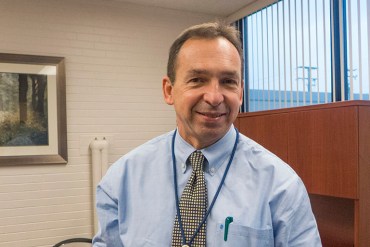 That pessimism can be heard throughout this town of about 7,600 residents. While the law was described as historic, many here do not perceive that it helped them. Like many other states, Pennsylvania re-branded their expanded offering of federal insurance program for the poor, fearing that “Medicaid” which is also often referred to as “Medical Assistance” would be off-putting; now it is called “Healthy PA.”

Bryan McMullin, a 47-year-old who works in Connellsville’s river-rafting business, got coverage last year but said good health care remains hard to come by. “In this area, nothing’s changed in 40 years, no matter who is president,” he explained from a barstool at a pub near the now-vacant glass factory.

Daniel Martin, a 28-year-old Highlands patient who also works in the rafting trade said he uses his new coverage for his monthly blood medication. A Trump voter, he hadn’t realized that coverage now could be in jeopardy.

And small towns like this tend to be far sicker than the norm. In Fayette, more than 1 in 10 people is estimated to have diabetes. Out of 67 counties in the state, Fayette ranks 66th for health outcomes and more than a third of its residents are obese. It’s tied with northern Potter County for the second-highest teen birth rate in the state. Between 2014 and 2015, the county saw about 31 people overdose for every 100,000, according to an analysis by the federal Drug Enforcement Administration.

Plus, the hospital is Connellsville’s second-largest single employer, after the school district. It contributes an estimated $15 million to the local economy, Andursky said. That’s in a town where unemployment’s already at 7.6 percent — up from last year and higher than the state and national averages.

There are other hospitals in the region. 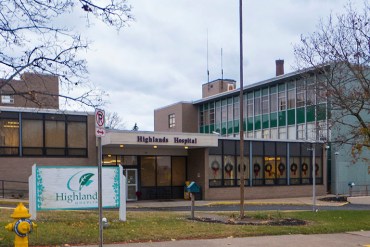 With its 64 beds, Highlands Hospital is – like so many rural hospitals – a crucial economic engine in town and a key source of local health care. (Shefali Luthra/KHN)

Uniontown, about 15 miles away, is also in Fayette County. It has 175 beds — more than double Highlands — but no behavioral health services to treat problems like addiction. Frick, another small rural hospital about 12 miles away, technically serves neighboring Westmoreland County. For more serious conditions, and trauma care, university hospitals are about an hour away — in Pittsburgh on one end, and Morgantown, West Virginia, on the other. Patients in extremis often get stabilized at the local hospitals before transfer.

But rain and snow, combined with mountainous terrain and limited public transit, mean traveling even short distances poses hardship. “It is still challenging to have to travel even 20 miles to get your care,” said Lisa Davis, director of Pennsylvania’s Office of Rural Health and outreach associate professor of health policy and administration at Pennsylvania State University. “It could take you all day to get to a one-hour appointment.”

In a medical emergency, getting care quickly can mean the difference between life and death

So far, the incoming Trump administration hasn’t released its health plan to replace Obamacare. But, experts say, it is likely to give the states less federal money for treating the poor. It is unclear how rural hospitals will compensate for the financial benefits they are likely to lose — or how many more rural hospitals will fall.

“What they need to do is be sure to protect the government programs: Medicare and Medical Assistance,” Andursky said. “We can’t put them at risk.”

Even In Trump Country, Rural Hospitals Brace For Damage From Health Law’s Repeal