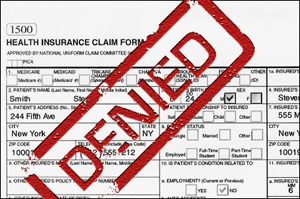 The health insurance industry and consumer groups are facing off over a much touted provision in the new federal health law that allows patients to seek independent reviews of denials in coverage.

The health care law gives members of most individual and group health plans, including employer-sponsored plans that are self-insured, the right to appeal an insurer’s decision to deny, reduce or cancel benefits. The provision does not apply to plans that existed before the law was enacted and thus have grandfather status. Last July, the federal government announced rules requiring insurers to explain their coverage decisions and how patients could appeal those decisions within the plan and to an external review board. The rules also specify the timeframes for patients to file appeals and for insurers to respond.

Although some states already had external appeals processes, they varied from state to state and plans do not always have to follow the results. The new law provides federal standards.

The government gave the insurance plans a grace period until July 1 to comply with the rules  which apply to most health plans that started or renewed after Sept. 23 — and invited comments.

Insurers asked the government for a number of revisions, including expanding the 24-hour deadline insurers for reviewing urgent requests for coverage; hamper the ability of patients to seek decisions from external review boards, and dropping the requirement that information about the process provided to non-English speaking patients be made only in writing.

An industry spokesman said insurers’ recommendations would improve, not threaten the appeals process.

“We’ve made suggestions to simplify the process and make it work better and more efficiently for patients,” said Robert Zirkelbach, a spokesman for America’s Health Insurance Plans, a trade association representing 1,300 insurers.

“We are concerned that there is going to be a delay in implementation or a push back to weaken the final rules,” said Cheryl Fish-Parcham, deputy policy director at Families USA, a health advocacy group. “These rules offer crucial protection to people who are denied medical services, and who, in the past, had no other recourse.”

Consumer advocates raised their concerns in a letter to Karen Pollitz, director of Office of Consumer Support at the Department of Health and Human Services, and Phyllis Borzi, assistant secretary of the Employee Benefits Security Administration at the Department of Labor. Among the signers were Advocacy for Patients with Chronic Illness, Families USA, the Connecticut Healthcare Advocate, Health Access California, the National Woman’s Law Center, U.S. PIRG and the Vermont Healthcare Ombudsman.

“We have received the letter and are reviewing it,” said Jessica Santillo, a spokeswoman for HHS. A Labor Department spokeswoman referred requests for comment to HHS.

Zirkelbach, the industry spokesman, said urgent care was not the same as emergency medical care and does not always have to be provided within 24 hours. He said some insurance terms may be difficult to translate in written form so it is better for a non-English speaker to talk to “a live person who speaks their language and can explain what the process is.”

He also said health plans are doing everything they can to meet the July 1 deadline but that may not be possible given logistical problems like trying to contract with independent review organizations to handle external appeals.

In a letter to government officials on the appeals rules, AHIP’s senior vice president Jeffrey Gabardi wrote last fall, “A delay in the compliance date to allow changes to the rules will not penalize individuals who are challenging claim denials. Rather, it will give everyone more time to ‘get it right’ in terms of establishing an appeals process that works for consumers, but does not add additional cost or complexity.”

Susan Jaffe can be reached at Jaffe.khn@gmail.com