As states set up their exchanges under the federal health law, they should consider including adult vision benefits, according to the authors of a new study showing that people without such coverage are less likely to seek care. 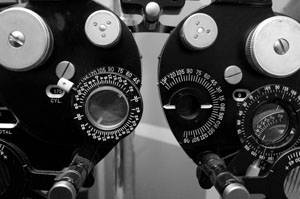 Although the federal health law mandates vision coverage for children, the same requirement does not apply to adults.

States themselves can require certain insurance benefits. And researchers from the Arnold School of Public Health at the University of South Carolina suggest strong reasons for doing so.

Dr. Sudha Xirasagar, who oversaw the study, said she was particularly surprised to see such a high number of people without vision insurance, particularly those with serious eye conditions.

The researchers also found that people with vision insurance were more likely to have seen an eye doctor within the past year and were less likely to report having difficulty seeing and reading.

“You would think that people who have glaucoma and macular degeneration should be worried about their eyes and should be going and getting [care] regardless of whether they have vision insurance or not. But they don’t, which is a bad thing,” said Xirasagar.

The researchers used 2008 data from the Centers for Disease Control and Prevention to compare the trends in eye care visits by more than 27,000 adults aged 40 up to 65 years old — a range in which people are at greater risk for the three serious eye conditions and are not covered by Medicare, she said.

Although the study’s findings may seem obvious, Xirasagar says they raise several important implications for establishment of exchanges, where individuals and small groups will obtain insurance.

“This evidence now will tell them that it is in the government’s best interest to insure that the basic insurance plans cover preventive eye screenings from the age of 40 and onward,” she said.

Dr. Michael Repka, the medical director for governmental affairs of the American Academy of Ophthalmology, said it may also be in insurers’ interests to offer the benefit. “The companies that are selling insurance could offer vision care as an enticement to choose their program,” he said.