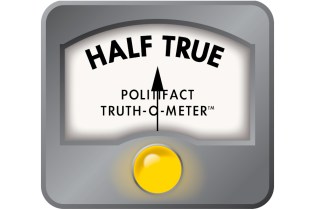 This fact check was produced in partnership with PolitiFact.

Minnesota Sen. Amy Klobuchar trotted out statistics at the November Democratic presidential candidates’ debate — suggesting that sweeping majorities oppose some of the abortion and reproductive health care policies backed by the Trump administration.

Those are large numbers for one of the nation’s most polarizing issues. So we decided to take a look and found that Klobuchar was correct in summarizing public opinion on Roe v. Wade but overstated support for Planned Parenthood funding.

An NPR/PBS NewsHour/Marist poll in June found that 77% of respondents wanted Roe v. Wade upheld — though, within that group, some people supported expanding circumstances in which abortion is legal, and others would like more restrictions. (The landmark court ruling is the basis for a women’s right to an abortion.)

Another poll, conducted in 2018, found a similar figure: 71% of respondents told NBC/Wall Street Journal pollsters that they opposed overturning the legal standard.

We couldn’t find specific polling evidence for Klobuchar’s 90% statistic of support for Planned Parenthood. In fact, we found evidence indicating support is lower.

A majority of Americans do want the government to fund the network of clinics that provide not only abortions, but also many other health care services to mainly low-income women. The support takes two forms: Planned Parenthood can bill government health plans for non-abortion services — since federal law blocks taxpayer dollars from paying directly for abortions — and Planned Parenthood clinics are also eligible for funding from the federal Title X program, which supports low-income women’s access to contraception.

Right now, Planned Parenthood is not accepting Title X funding because the Trump administration has banned the program’s grantees from referring patients for abortions.

Polling in April by the Kaiser Family Foundation found that 73% of the public believe “the government should continue paying Planned Parenthood for non-abortion services provided to people on Medicaid.” (Kaiser Health News is an editorially independent program of the foundation.)

A January 2017 poll by Quinnipiac found a lower figure: 62% opposed cutting off government funding to Planned Parenthood. When respondents learned that those dollars didn’t fund abortion, support rose to 80%.

Klobuchar’s campaign highlighted polling by the progressive polling group PerryUndem. The poll does reference opposition of 90% to something related to defunding Planned Parenthood, but it does not jibe with Klobuchar’s statement.

Those are significant numbers for what has long been a lightning rod of the culture wars. But they don’t match the statistic Klobuchar cited.

Both ideas appear to have majority support. But we couldn’t find compelling evidence for the 90% figure — polls focused on this particular issue suggest support is somewhat lower.

With one of these statistics correct and the other based on a different, broader polling question, we rate this claim Half True.