The news about the novel coronavirus in China grows more urgent daily. The number of related deaths is now greater than 1,300, while tens of thousands of people have been infected — most of them in China. People returning to the U.S. from China are quarantined for 14 days. It can be frightening to think about the threat, but public health officials in this country constantly remind people that the risk of the disease here is low.

Still, scientists have more questions than answers about important issues surrounding the coronavirus, now officially named COVID-19. Here’s some help in understanding the unknowns and evaluating the risks.

More than 1,300 people have died from this virus since December. That sounds pretty scary. Should I be worried?

All but two of those fatalities occurred in China, where the virus emerged. That country has reported the lion’s share of cases, said Dr. William Schaffner, a professor of preventive medicine, health policy and infectious diseases at Vanderbilt University Medical Center.

The 15 Americans identified so far with the disease had recently been in China or had close contact with someone who became infected in China. In addition, public health officials report that many of the U.S. cases have been relatively mild infections.

The number of deaths in China is startling, but remember, even a virus with a low fatality rate can kill many people if the number of infections is large. For example, influenza kills 0.14% of infected patients, said Dr. Peter Hotez, a professor of pediatrics, molecular virology and microbiology at Baylor College of Medicine in Houston. But because the flu is so common — infecting up to 45 million Americans a season — deaths could climb as high as 61,000 people each flu season just in the U.S., according to the Centers for Disease Control and Prevention.

But the statistics coming out of China are also suspect, and experts don’t yet know how to evaluate them. For example, Chinese officials Thursday suddenly changed their criteria for confirming the disease and added more than 15,000 cases to the patient tally — after two days of reporting a downturn in the number of people affected.

To be sure, it is often difficult to get a good assessment of cases while using most of your public health resources to fight an outbreak.

The number of coronavirus cases may be much higher than China is reporting, said Lawrence Gostin, director of the World Health Organization Collaborating Center on Public Health Law & Human Rights. That may not be a deliberate effort to downplay the outbreak but could signal problems “with China’s capacity for testing and surveillance,” he said. “They are just not picking up all the cases and deaths. An even greater problem is that there is no independent verification.”

The World Health Organization “is relying on data from China and has no ability at present to independently verify those data,” Gostin said. That could change, he added, if WHO experts are allowed into the center of the outbreak, the city of Wuhan in Hubei province. “But I have significant concerns that even then [WHO] won’t have access to full information,” he said.

What is the mortality rate from this virus?

News reports and health officials have reported widely varied estimates of death rates for this outbreak. Schaffner cautions that calculating those numbers in a fast-moving outbreak is difficult.

It’s not surprising that mortality rates for the coronavirus vary dramatically, based on where diagnoses were made, Schaffner said. For example, a report Monday from the Imperial College of London found a mortality rate of 18% for cases detected in Hubei, where only patients with unusual pneumonia or severe breathing problems were being tested for the virus. Outside China, health officials test anyone with a cough and fever who has visited Hubei — a much larger number — producing a mortality rate of 1.2% to 5.6%. 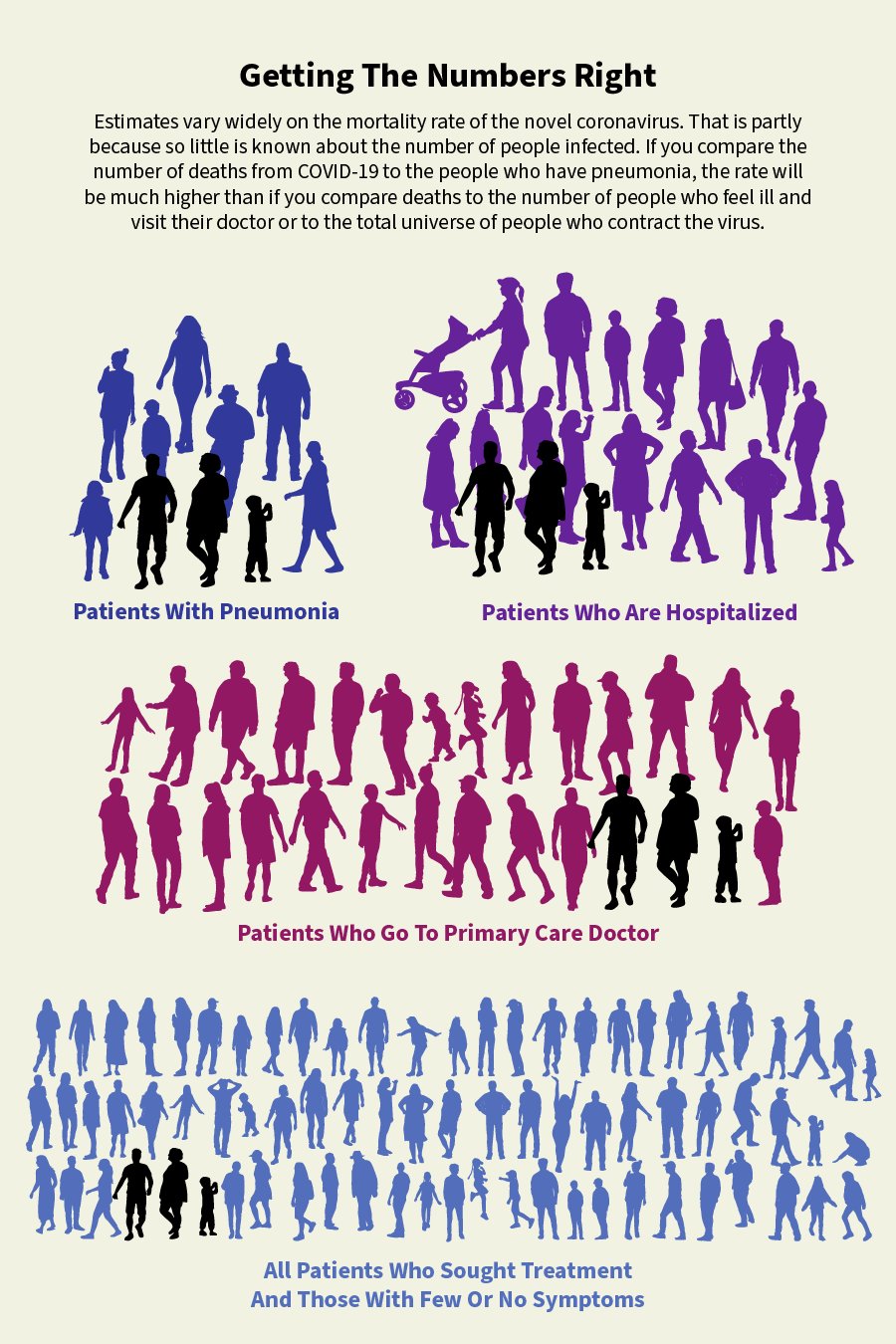 How is the virus spreading? Do you need to worry only about people sneezing next to you?

The rapid spread of the coronavirus suggests it is transmitted person-to-person, much like influenza: An infected person coughs out moist droplets containing the virus and another person breathes them in, said Schaffner.

Because the moist droplets fall to the ground within 3 to 6 feet, patients are most likely to infect people with whom they are in close contact. These droplets can also land on surfaces, such as door handles, and infect other people who touch the contaminated surface, then touch their mouth or eyes.

It’s much less common for viruses to spread through so-called airborne transmission, in which viruses float in the air for a long time, like measles or chickenpox, said Hotez.

The diagnosis this week of a woman who lived in a Hong Kong apartment with an unsealed pipe raised the question of whether COVID-19 may have been transmitted through the building’s plumbing. A 2003 outbreak of SARS — or severe acute respiratory syndrome, caused by another type of coronavirus ― is believed to have infected 321 residents of the Amoy Gardens apartment complex in Hong Kong because the virus may have spread through a plume of warm air that traveled through the pipes.

While the Amoy Gardens outbreak was striking, experts believe it was a one-time phenomenon. No one has found another example of a coronavirus spreading through plumbing, said Michael Osterholm, director of the University of Minnesota’s Center for Infectious Disease Research and Policy.

Anecdotal reports that patients without symptoms can spread COVID-19 have been widely publicized. But scientists have not confirmed such transmissions, said Dr. Amesh Adalja, a senior scholar at the Johns Hopkins Center for Health Security in Baltimore. Other coronaviruses, such as SARS and Middle East respiratory syndrome, have not been shown to spread in patients without symptoms.

A report from Germany, published this year in the New England Journal of Medicine, pointing to a case in which someone was infected by an asymptomatic person “has been shown to be inaccurate” because the primary patient “did have symptoms at the time she spread the virus,” he said. She had taken medication to reduce her fever.

I read about one man who infected nearly a dozen people as he traveled in Europe. Some articles call him a “super spreader.” Can people transmit the virus so easily?

So-called super spreaders are people who infect a larger-than-average number of people.

While some people with coronavirus never infect anyone else, others infect dozens. In 2003, a Hong Kong SARS patient infected 136 people at one hospital. As a general rule, health officials estimate that 20% of people with a given infectious disease cause roughly 80% of the cases, Hotez said.

Although it’s not known how large a role super spreaders are playing in the COVID-19 outbreak, anecdotes have dotted the press. A British man, for example, is believed to have infected 11 others at a French ski resort.

Scientists don’t know why some people are more contagious than others, Hotez said. It’s possible that these people have a higher viral load and “shed” more of the virus when they cough or sneeze. Scientists don’t know if personal habits also come into play. For example, do these patients cough more vigorously than others? Do they socialize more? Are they more apt to touch objects or other people?

People are being quarantined on military bases and cruise ships. Does that work?

Quarantines have been used since the 14th century, when cities such as Venice ordered ships to remain at anchor for 40 days before landing as a way to prevent the spread of the plague. The word “quarantine” comes from the Italian word for 40.

But quarantines are effective only when they’re limited and based on good scientific evidence, Gostin said.

The two-week quarantines that U.S. officials have imposed on people evacuating Wuhan — who had a high risk of being exposed to the virus — make sense, he suggested, because people aren’t being housed together. Evacuees are protected from exposure to the virus and prevented from transmitting it to others, Gostin said.

“They are overbroad and under conditions that could fuel the epidemic,” said Gostin, who is also faculty director at Georgetown University’s O’Neill Institute for National and Global Health Law. “People are being forced to remain in close, congested conditions, so they are likely to spread infection among themselves.”

Forcing passengers on a cruise ship to remain in their cabins for two weeks “is a cruel human experiment,” Osterholm said. “They should be released as soon as possible. We’re just facilitating transmission” on the ship.

Passengers should be asked to “shelter in place” at home for two weeks instead, he added.

“Most people will comply,” Osterholm said.