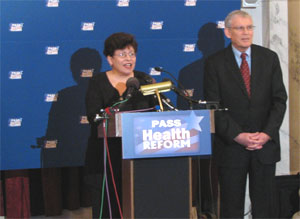 Leaders from some of the 200 that called on lawmakers Wednesday to pass health care reform stand with Families USA Excutive Director Ron Pollack at a news conference in the Russell Senate Office Building. (Andrew Villegas/KHN)

As Democrats worked feverishly Wednesday to corral votes in support of a health care overhaul, they picked up the endorsement of more than 200 advocacy groups and medical associations who urged lawmakers to pass the bill.

The alliance, spearheaded by the liberal advocacy group Families USA, bought two-page advertisements in three Capitol Hill newspapers Wednesday calling for lawmakers to pass health care reform. The groups list several tenets of reform they support in the ad – among them cutting the deficit and prohibitions against large premium increases – and say they’re speaking now “because the cost of doing nothing is much too high.” The Service Employees International Union provided the money for the ads, said Ron Pollack, executive director of Families USA.

“Never before has such a diverse and large number of national organizations combined together to support major health reform legislation,” Pollack said at a news conference Wednesday morning.

Even as these groups expressed their support, the final details of the legislation were not set, and Pollack said other organizations were holding out for actual legislative language before opting to support the bill.

But some of these advocates were not expecting to be disappointed. For instance, although House Democrats were exploring new cost and revenue possibilities to ensure the bill makes its deficit reduction target, Andy Stern, president of the SEIU, said at the news conference that his enthusiasm would not be reduced even if House Democrats changed a provision related to excise taxes on the types of high-cost health plans that many union members have. Unions reached an agreement with the White House recently that would raise the threshold for how expensive plans would be before they are taxed and would keep the tax from kicking in until 2018 in order to allow new collective bargaining agreements to be reached.

“It won’t change my opinion,” Stern said. “This bill should pass, no matter what is changed.” Stern said he was confident however, that the “appropriate” level of an excise tax that “makes most Americans happy” would be included in final legislation. The Washington Post reports, however, that House lawmakers want to scale back the provision to tax high-cost insurance plans at a rate of 40 percent. Earlier this week, Stern told The New York Times he’d back independent candidates who vote against health reform.

Groups signing on to the call to pass reform included the American College of Physicians, the American Nurses Association, the Federation of American Hospitals, the Catholic Health Association of the United States, the National Association for the Advancement of Colored People, the UAW, the United Food and Commercial Workers International Union and the SEIU. In all, about 240 groups signed the advertisement.

Chip Kahn, president of the Federation of American Hospitals, said, “Victory – real health reform – is in sight.” Kahn, who opposed the Clinton administration’s health care overhaul effort in the early 1990s, said the current legislation would provide health care security for all Americans. “That’s why we encourage the House of Representatives to pass this legislation this week,” he said.

This is one of KHN’s “Short Takes” – brief items in the news. For the latest news from KHN, check out our