Food and Drug Administration Commissioner Scott Gottlieb on Wednesday called for tighter scrutiny of electronic health records systems, which have prompted thousands of reports of patient injuries and other safety problems over the past decade. 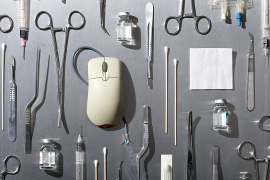 “What we really need is a much more tailored approach, so that we have appropriate oversight of EHRs when they’re doing things that could create risk for patients,” Gottlieb said in an interview with Kaiser Health News.

Gottlieb was responding to “Botched Operation,” a report published this week by KHN and Fortune magazine. The investigation found that the federal government has spent more than $36 billion over the past 10 years to switch doctors and hospitals from paper to digital records systems. In that time, thousands of reports of deaths, injuries and near misses linked to EHRs have piled up in databases — including at least one run by the FDA.

Gottlieb said Congress would need to enact legislation to define when an electronic health record would require government oversight. He said that the digital records systems, which store a patient’s medical history, don’t fit neatly under the agency’s existing mandate to regulate items such as drugs and medical devices.

Gottlieb said the best approach might be to say that an EHR that has a certain capability becomes a medical device. He called EHRs a “unique tool,” noting that the risks posed by their use aren’t the same as for a traditional medical device implanted in a patient. “You need a much different regulatory scheme,” he said.

The 21st Century Cures Act of 2016 excludes the FDA from having oversight over electronic health records as a medical device.

Gottlieb said that health IT companies could add new functions that would improve EHRs, but they have been reluctant to do so because they didn’t want their products to fall under FDA jurisdiction. He added that he was “not calling” for FDA to take over such a duty, however, and suggested that any new approach could be years away. Proponents have long argued that widespread use of EHRs can make medicine safer by alerting doctors to potential medical errors, though critics counter that software glitches and user errors may cause new varieties of medical mistakes.

How closely the FDA should watch over the digital medical record revolution has been controversial for years. The agency’s interest in the issue perked up after Congress decided in February 2009 to spend billions of dollars on digital medical records as part of an economic stimulus program.

At the time, many industry groups argued that FDA regulation would “stifle innovation” and stall the national drive to bring medicine into the modern era. Federal officials responsible for doling out billions in subsidies to doctors and hospitals generally sympathized with that view and were skeptical of allowing the FDA to play a role.

The debate became public in February 2010, when Jeffrey Shuren, an FDA official, testified at a public hearing that the agency had tied six deaths and more than 200 injuries to health information technology. In all, the FDA said, it had logged 260 reports in the previous two years of “malfunctions with the potential for patient harm.”

The agency said the findings were based largely on reports voluntarily submitted to the FDA and suggested “significant clinical implications and public safety issues.” In one case cited, lab tests done in a hospital emergency room were sent to the wrong patient’s file. Since then, several government and private repositories have associated thousands of injuries, near misses and deaths to EHR technology.

Shuren said in 2010 that the agency recognized that health information technology had great potential to improve patient care, but also needed oversight to “assure patient safety.”

While some safety proponents agree that EHRs offer tremendous benefits, they also see a greater opportunities to improve their safety.

Dean Sittig, a professor of bioinformatics and bioengineering at the University of Texas Health Science Center, said EHRs have improved safety within the health care system, but they have not eliminated errors to the extent that he would have expected. Federal officials were initially pushing for rapid adoption and “there wasn’t a lot of interest in talking about things that could go wrong,” Sittig told KHN and Fortune.

Earlier this month, Gottlieb announced his resignation from the FDA. His last day is scheduled to be April 5.