About This Special Report

The commissioner of the Food and Drug Administration questions whether the right financial incentives are in place for drugmakers who develop orphan drugs for rare diseases.

In an interview this week, the FDA’s Scott Gottlieb said the Orphan Drug Act of 1983 has provided “an enormous amount of public health value” over the years, but the “market has changed.”

Gottlieb said it’s time to ask the question: “Do we have the right incentives in place?”

The nearly 35-year-old law created incentives for companies to develop “orphan drugs” considered not financially viable because they treat rare diseases affecting fewer than 200,000 people. Those incentives include a waive on millions of dollars in fees, seven years of market exclusivity and a tax break for research and development expenses.

The law proved successful — in the decade before it passed, only 10 industry-supported rare-disease drugs had been brought to market, according to the FDA.

Today, orphan drugs often carry six-figure price tags and pharmaceutical companies readily develop them. In 2016, 41 percent of the new drugs approved by the FDA were orphans. And 2017 is on track to be a record year.

In the past year, rare-disease drugs commanded attention through numerous pricing controversies. Examples include Marathon Pharmaceuticals, which sold its $89,000 drug for Duchenne muscular dystrophy after public outcry, and Strongbridge Biopharma, which relaunched a glaucoma drug this year after winning orphan approval to treat a rare neuromuscular condition. The drug’s annual price tag is at least $109,500.

“Clearly, [the Orphan Drug Act] has delivered,” said Bernard Munos, a former corporate strategy adviser at drug giant Eli Lilly who is now a senior fellow at FasterCures. “In that same vein, I think a problem that we didn’t anticipate some 30 years ago is the pricing crisis.”

The top 100 orphan drugs in the U.S. cost an average of $140,442 per patient last year, according to EvaluatePharma.

Gottlieb’s comments come after a year of scrutiny around orphan drugs.

An investigation by Kaiser Health News that NPR published and aired in January found that many drugs with orphan status weren’t entirely new when approved. Of about 450 drugs that have won orphan approval since 1983, more than 70 were drugs first greenlighted by the FDA for mass-market uses. Those include the cholesterol blockbuster Crestor, Abilify for psychiatric disorders, and the rheumatoid arthritis drug Humira, the world’s best-selling drug.

More than 80 other orphan drugs won FDA approval for more than one rare disease, and in some cases, multiple rare diseases. For each approval, the drugmaker qualified for a fresh batch of incentives. Altogether, KHN’s investigation found that about a third of drugs given the FDA’s orphan status have either been repurposed mass-market drugs or drugs that received multiple orphan approvals.

Gottlieb and other industry experts have said that repurposing common drugs to treat rare diseases is scientifically sound and good for patients. But Gottlieb has also said high drug prices are a public health concern, and in the phone interview Wednesday he questioned whether the financial incentives should be different for drugs that receive “secondary approvals.” 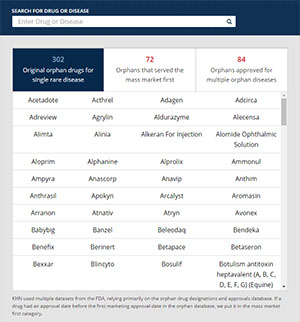 “It could very well be that you need to think differently about how you would create a framework around the secondary indication and the primary indication,” Gottlieb said, adding that he doesn’t have an answer but the agency has been asking the question.

At the same time, Gottlieb pointed to rare diseases without treatments, even under the current incentive system: “You have to ask why various uses of drugs aren’t getting studied.”

Paul Melmeyer, director of federal policy at the National Organization for Rare Disorders, said there is a lot of unmet need since nearly 7,000 diseases lack treatments for an estimated 30 million Americans.

While Gottlieb can change agency guidelines, any change to the Orphan Drug Act’s incentives would require congressional action. And there may be an appetite for such a change.

Gottlieb became commissioner in May, a few months after three key Republican senators called for a federal investigation into potential abuses of the Orphan Drug Act. The Government Accountability Office began an investigation last month.

Congress included changes to orphan drug incentives in its sweeping tax legislation, reducing the orphan drug tax credit from 50 percent of research and development costs to 25 percent — a move that will save the government $32.5 billion from 2018 to 2027. Earlier versions of the bill included transparency requirements and an elimination of credits for repurposed drugs — both of which were struck from the final version.

Gottlieb, though, has not waited for the GAO or Congress before doing what he can to revamp the program. In late June, he announced a modernization plan that included closing a loophole that allows manufacturers to skip pediatric testing requirements when developing a mass-market drug for treating rare diseases in children.

When asked about the coming year, Gottlieb said: “We are going to look for other ways to make sure the program is achieving its public health goals.”

Sydney Lupkin contributed to this report.