This story also ran on Vice. This story can be republished for free (details).

Vaccination decisions are usually pretty straightforward. People either meet the criteria for the vaccine based on their age or other factors or they don’t. But when a federal panel recently recommended an update to the human papillomavirus (HPV) vaccine guidelines, it left a lot of uncertainty.

The panel recommended that men and women between ages 27 and 45 decide — in discussion with their health care providers — whether the HPV vaccine makes sense for them.

But some public health advocates criticize that advice because it doesn’t provide doctors and patients clear guidance about who in this expansive age group are good candidates. They worry that many people may get immunized who won’t benefit, adding needless cost to the health care system and possibly shortchanging people overseas, where the vaccine is in short supply.

“My concern is that there will be a whole lot of people or doctors recommending this vaccine,” said Debbie Saslow, managing director of HPV and gynecological cancers for the American Cancer Society. “But I think that the benefit is so small and we just don’t have guidance.”

The human papillomavirus is the most common sexually transmitted infection in the United States; nearly everyone who’s sexually active will get it at some point. People typically clear the virus on their own and often don’t even realize they’ve been infected. But in some people, HPV remains in the body and may cause several types of cancer as well as genital warts.

Every year, HPV causes more than 33,000 cancers, including more than 90% of cervical cancers as well as cancers of the vagina, vulva, penis, anus and the area at the back of the throat called the oropharynx, according to the Centers for Disease Control and Prevention.

More than 40 types of HPV affect the genital area. Merck’s Gardasil 9, the vaccine used in the United States, provides protection against nine types, which together are associated with the majority of HPV-related cancers and cause 90% of genital warts.

Because HPV is so common among people who are sexually active, the best time to vaccinate is before people start having sex and risk being exposed to the virus. The CDC’s Advisory Committee on Immunization Practices recommends HPV vaccination for all 11- and 12-year-old girls and boys. Catch-up immunizations for young people outside that age window are recommended through age 21 for men and 26 for women (the proposed HPV vaccine update would change the catch-up vaccination guideline for men to align it with the age-26 cutoff for women).

In its June meeting, the immunization committee, which includes public health experts, recommended widening the vaccination window to include adults between 27 and 45.

But rather than give the thumbs-up for everyone in that age group, the panel said people should engage in “shared clinical decision-making” with their health care professional to decide if the vaccine is right for them.

“ACIP made this type of recommendation because most people in this age group are not likely to benefit from getting the vaccine,” Kristen Nordlund, a spokeswoman for the CDC, wrote in an email.

The vaccine won’t protect people against types of HPV to which they’ve already been exposed, and many sexually active people have been exposed to at least some HPV types by their late 20s.

However, it’s unlikely that people in the older group have been exposed to all nine types of HPV the vaccine protects against. 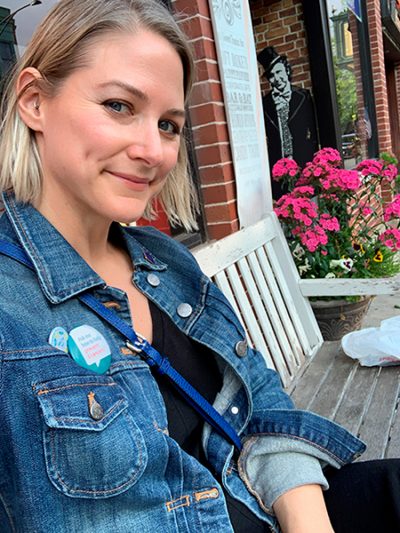 Jennifer Sienko was surprised recently when her physician suggested that she consider getting the HPV vaccine. (Courtesy of Jennifer Sienko)

“There’s some sense that you can get some protection against some future cancers,” said Dr. William Schaffner, professor of preventive medicine and infectious diseases at Vanderbilt University School of Medicine, who is the ACIP liaison for the National Foundation for Infectious Diseases.

Yet, patients — and their doctors — would be hard pressed to know if immunization would be beneficial.

“The problem is that no individual person is likely to know which individual type of HPV they’ve been exposed to,” said Dr. Christopher Zahn, vice president of practice activities at the American College of Obstetricians and Gynecologists.

Vaccine experts have some suggestions about which people older than 26 might consider getting the three-shot series. They include people with multiple sex partners and those who are newly single and dating after being in a monogamous marriage or relationship.

Jennifer Sienko is in a better position than most people to evaluate whether to get the vaccine. She is co-director of the National HPV Vaccination Roundtable, a coalition of groups aimed at reducing HPV cancers that is hosted by the American Cancer Society.

But she was recently surprised when a new doctor asked the 40-year-old if she wanted the vaccine. She opted against it.

Sienko, who lives in Chicago, has been married to her second husband for three years, and that contributed to her decision. But perhaps, she said, it would have been different when she was single for a time.

“So there may have been a window where, had the vaccine been indicated for older women, perhaps between my marriages I would have looked into that,” she said.

The CDC is reviewing the ACIP recommendation. If it approves the recommendation, experts hope the CDC will provide further guidance on determining who the vaccine is appropriate for.

If the CDC approves broadening the age for the vaccine in consultation with a health care provider, most insurers would cover the costs, which can run a few hundred dollars per dose. Under the Affordable Care Act’s preventive coverage rules, patients generally won’t have to pay anything out of pocket for it.