The Obama administration on Friday offered an explanation for why it rejected Mississippi’s bid to establish a state-based online health insurance marketplace, called One, Mississippi. In a letter, the federal government’s top exchange official said they had no choice because Gov. Phil Bryant would not allow the exchange to work with Medicaid and other agencies under his control.

“There is no feasible pathway to approving a state-based Marketplace in Mississippi for 2014 without support from Governor Bryant and agreements to coordinate with other state agencies,” Gary Cohen, director of the Centers for Medicare and Medicaid Services’ Center for Consumer Information and Insurance Oversight wrote in the letter Friday to state Insurance Commissioner Mike Chaney.

Federal officials said state-based marketplaces, as part of the conditions for their approval, must prove they can work with other agencies so people who apply for coverage will be directed seamlessly to private insurance or government programs such as Medicaid. Bryant, a Tea Party Republican, has made clear he would not allow that. 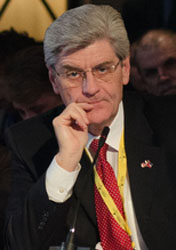 Eighteen states and the District of Columbia applied to develop a state-based marketplace, or exchange. Mississippi is the only one to be denied. Utah’s application is still facing uncertainty because Republican Gov. Gary Herbert does not want to meet all the federal requirements.

States that don’t form their own marketplace will have one run by the federal government starting Oct. 1, with coverage effective Jan. 1, 2014. The marketplaces are a key component of the federal health law to expand coverage to millions of people starting next year.

A federal official insisted that Bryant and other recalcitrant governors will not be able to impede operation of a federal exchange from connecting people to Medicaid.

Chaney, the Republican insurance commissioner,  had been developing the state exchange for 18 months and had even begun advertising the new website at college football games and on billboards. But when it came time to seek federal approval in December, Bryant stepped in the way, saying he would not aid its operation and that Chaney did not have the authority to start the exchange.

Federal officials Friday said they hope the Mississippi Insurance Department will apply for a state partnership marketplace before the Feb. 15 deadline. In the partnership model, the federal government does most of the work while the state handles consumer assistance and reviews the health plans that apply for inclusion.