RIVERSIDE, Calif. – Stephanie Lingenfelter, 22, said she has been too busy with school and work to sign up for health insurance.

Jackie Schuman, 50, would like insurance but said she can’t afford it, even with financial help.  “It’s like a car payment,” she said. “It’s too much.”

California leads the nation in health insurance enrollment under the Affordable Care Act, following months of aggressive media campaigns and grassroots outreach about the importance of getting covered. But as the deadline approaches, some uninsured Californians remain unconvinced. 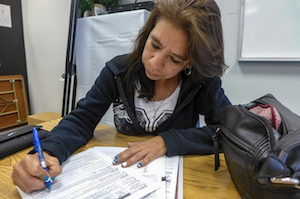 Without a computer at home, Griselda Aguilar visited the enrollment event at the Riverside Neighborhood Health Clinic to get enrolled. The 47-year-old grocery store worker has been uninsured for about 20 years and pays cash when she needs to see a doctor (Photo by Anna Gorman/KHN).

With just days to go before the formal March 31 deadline, hundreds of events are taking place around the state to enroll residents through Covered California, the state’s health insurance marketplace. Officials recognize they won’t reach everyone but are trying to create a sense of urgency, especially in areas like the Inland Empire and the San Joaquin Valley where the pace of enrollment has been slower.

“There will always be a number of people who don’t enroll for one reason or another,” said Dana Howard, spokesman for Covered California. But he said the word is getting out and people are realizing they have only a few days left before the enrollment window closes this year for most people.

Despite the announcement Wednesday that deadlines would be relaxed for some people using the federal marketplace, California officials say they are holding firm to March 31 for their state-run marketplace.

“Covered California is not extending its deadline for applying for a health plan,” Covered California Executive Director Peter V. Lee said Wednesday. “However, we’re committed to helping all those who started an online application to cross the finish line.”

Those who start an online application by March 31 will have until April 15, to complete their applications, he said.

More than 1 million people have signed up for private plans through Covered California ­– about a third of the 3.3 million residents potentially eligible, according to the Kaiser Family Foundation. (Kaiser Health News is an editorially independent part of the foundation.)

Another 2 million have enrolled in Medicaid, the government insurance program for low-income residents.

Nearly every region in the state has surpassed projections made by the insurance exchange, though meeting those benchmarks was harder in some places than others. The Bay Area and Orange County, for example, reached their milestone earlier than did Riverside and Los Angeles. As of last week, San Bernardino and Fresno had not yet met the enrollment projections.

Some regions didn’t have as strong a network of community organizations to reach out to people, Howard said. They also had more Latino residents, and exchange officials have acknowledged they weren’t prepared with enough bilingual workers or materials to get them signed up.

In the Inland Empire, which covers San Bernardino and Riverside counties, geography also played a role. The area is spread over 27,000 square miles and includes several isolated rural communities. Before the nation’s health law took effect, about 30 percent of San Bernardino County residents and 25 percent of those in Riverside County were uninsured in an area hard hit by recession and high unemployment.

Dr. Geoffrey Leung, medical director of Riverside County Health System’s Family Health Care Centers, said many of his patients don’t prioritize their health because they have other overriding concerns, such as feeding and housing their families. “People don’t realize the benefits in health coverage,” he said. “People don’t realize the risk that’s associated with not having it.”

By the end of January, about 59,000 residents in the Inland Empire had picked plans but signups were still far below the exchange projections. After a targeted campaign that included additional enrollment events, more television and radio ads and added Spanish-speaking staff, that number jumped to about 72,340 by the end of February.

Local legislators said they have been trying to persuade people how health insurance could help them, especially in an area where many have undiagnosed diabetes and high blood pressure.

“These are silent chronic diseases that impact our community in disproportionate numbers,” said U.S. Rep. Mark Takano, a Democrat from Riverside. “These are diseases that cost all of us more.”

During a recent enrollment event at Riverside Neighborhood Health Clinic, legislators encouraged residents to tell friends and relatives about the impending deadline.

Griselda Aguilar, 47, had the day off from work at a grocery store and without a computer at home, she decided to come to the clinic to get enrolled. Aguilar has been uninsured for about 20 years and said she pays cash when she needs to see a doctor.

But a few years ago, her appendix nearly burst and she had an emergency appendectomy, which left her with about $5,000 in medical bills. “You never think you’re really going to need it,” she said, “so you keep putting it off and putting it off.”

The counselors couldn’t get online to Covered California, so they couldn’t tell her if she qualified for Medicaid or for financial help purchasing a policy. They promised to get her signed up and call her in a few days. With coverage, Aguilar said, “It won’t be so stressful for me.”

Mary and David Mateas, who own a business taking care of seniors, said they stopped paying for a private insurance policy about five years ago because it was costing them about $400 a month. The counselor told them their new policy through Covered California should be about half as much.

Mary Mateas, 46, said she is going to tell her friends at church that the program is affordable. “We’re not rich and we’re not poor,” she said. “We’re in the middle. It’s been hard if we get sick. We don’t have a lot of money on the side.”

Jackie Schuman, who was sitting outside in downtown Riverside, said she doesn’t have extra money to spend either. Her family has already cut back on food and entertainment costs. Schuman said her husband’s job as a technician at a cable company offers insurance but it is expensive and doesn’t cover much. Her teenage sons have Medi-Cal, the state’s version of Medicaid.

Schuman knows she is getting older and she worries about getting sick. “If I get cancer or something like that, what am I going to do? Go bankrupt?”

She signed onto Covered California to check her options but found the plans unaffordable. She knows the deadline is approaching and said she may look again. For now, Schuman said she will probably just pay the penalty.