On a near party-line vote delayed a half dozen times by protesters in the packed galleries, the Republican-controlled House passed a budget plan for the next decade that would dramatically shrink the role of the federal government. The controversial spending and tax blue print, designed by House Budget Committee Chairman Paul Ryan, was approved 235 to 193, with no Democratic support and four Republicans voting against it. 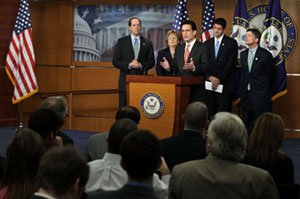 As the contentious day-long debate neared its conclusion, House Speaker John Boehner, R-Ohio, threw down the gauntlet to President Obama for the upcoming negotiations over raising the $14.3 trillion debt ceiling, which will become necessary sometime in the next several months. “The president wants a clean bill,” Boehner said, but “there will be no debt limit increase unless it is accompanied by spending cuts and real budget reforms.”

Read about Ryan’s proposals for Medicare and Medicaid

Though the House-backed plan stands no chance of passage in the Senate, much less being signed by the president, as a starting point for negotiations it sets a stake in the ground as far to the right as any political party has attempted since Barry Goldwater ran for president in 1964. It calls for far-reaching changes to government programs  more extensive than what was proposed in the 1994 GOP “Contract with America” — that affect about a fifth of the U.S. economy.

Ryan, R-Wis., the plan’s architect, said of the House action today: “This is our defining moment.”

Four Republicans, who joined the 189 Democrats in the chamber, voted against the budget plan. The four were David McKinley, a freshmen from Wheeling, West Virginia who won election last November with 50 percent of the vote; Walter Jones, a nine-term member from Greenville, N.C.; Denny Rehberg, the sole representative from Montana whose two Senators and governor are Democrats; and Ron Paul, a libertarian gadfly from Texas who favors cuts in defense and reduced American commitments abroad.

Rep. Chris Van Hollen of Maryland, the ranking Democrat on the Budget Committee, led the Democratic opposition to the bill. In a preview of what is certain to be a top issue in campaigns across the country in the next election, he and House Minority Leader Nancy Pelosi, D-Calif., repeatedly homed in on the dramatic changes to Medicare contained in the Republican approach to reducing deficits.

“The Republican plan disconnects the amount we give seniors from rising health care costs,” Van Hollen said. “That’s why seniors wind up paying more and more and more.” Democrats repeatedly referred to a Congressional Budget Office analysis released last week that showed seniors who turn 65 after 2023 will pick up 68 percent of their health care costs compared to 20 to 25 percent today.

“Do you realize your Republican leadership is asking you to cast a vote today that abolishes Medicare as we know it?” Pelosi asked in her final comments on the bill. Responded Ryan: “The biggest threat to Medicare is the status quo. … What we say is that in the future people who are wealthy do not need as much subsidy. People who are sick and who are poor get more.

The House-backed plan now goes to the Senate, where it stands no chance of passage since it is controlled by Democrats. A bipartisan group of six Senators, including several who served on the president’s fiscal commission, have been meeting for weeks to craft an alternative.

Their efforts were largely overshadowed this week when President Obama shifted sharply to the right by endorsing much of what was contained in his deficit commission’s plan released last November. The president proposed cutting deficits by $4 trillion over the next dozen years by cutting both domestic and defense spending, and raising taxes on well-off Americans through tax reform and ending the Bush-era tax cuts for those earning over $250,000 a year.

The Republicans who rose in support of the bill repeatedly castigated the president for proposing higher taxes in what is likely to be one of their major election-year themes. “The debt and deficit problem we have today is not because we have taxed too little, but because we have spent too much,” said second-term Rep. Tom Graves, R-Ga.

But Democrats continually linked their tax increases to the cuts in Medicare. “The question is not whether to reduce the deficit, but how,” said Rep. Xavier Becerra, D-Cal., who served on the deficit commission. “This plan gives $130,000 in tax cuts for millionaires while eliminating the guarantee for Medicare beneficiaries to choose doctors [and] adds $6,000 in health care costs. We don’t think Americans should get a coupon instead of a guarantee.”