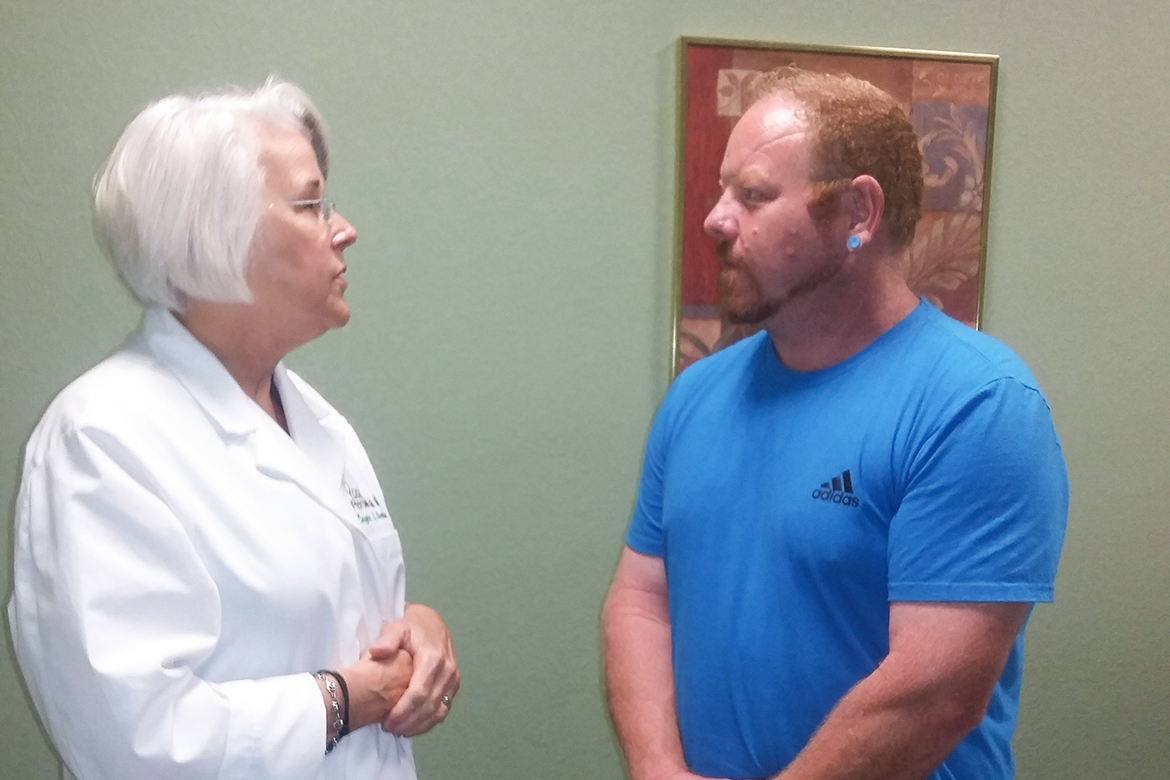 JARRELL, Texas — Darrell Kenyon had been punting for years on various medical issues — fatigue, headaches, mood swings. The 43-year-old uninsured carpenter was particularly worried about his blood pressure, which ran high when he checked it at the grocery store. Then he heard about a different type of physician practice, one that provided regular primary care for a monthly fee.

“Insurance for the self-employed is through the roof,” Kenyon told Dr. Loy Graham, as she examined him one morning in August. Two years ago, Graham had hung out her shingle in this central Texas town of nearly 1,400, about 40 miles north of Austin.

Under the practice model, called direct primary care, patients are charged monthly — typically $20 to $75, depending on age, in Graham’s practice — for basic, office-based medical care and frequently cell phone and other after-hours physician access. Proponents of the model, which is also supported as a practice option by the American Academy of Family Physicians, say it can provide a safety net for those with limited treatment options, including the uninsured and people in the country illegally. The alternative is particularly helpful in states like Texas that haven’t expanded Medicaid access, the advocates add.

But there’s a sizable catch: Direct primary care is not insurance.

Carolyn Engelhard worries that strapped individuals will decide the easier access to primary care is “good enough” and won’t investigate insurance options. “It can be a false security,” said Engelhard, who directs the health policy program at the University of Virginia School of Medicine in Charlottesville. “There’s sort of the illusion that it’s kind of like insurance.”

Lower-income Texans would be better off with coverage on the Affordable Care Act’s insurance exchange, where they could get a subsidy to reduce the cost of their premiums, Engelhard said. The policy would have a deductible, “which they might feel that they can’t afford,” she said. “But they would be protected if they got cancer or if they had an automobile accident.”

Graham estimates that at least three-quarters of her roughly 450 patients lack insurance, even though she advises them to carry some kind of catastrophic coverage for major health expenses. But the cost for such policies can be daunting. Like Kenyon, some of Graham’s patients are self-employed with fluctuating incomes or work for businesses that don’t offer coverage. Even if their employer offers affordable coverage for the employee, premiums for dependents might make coverage financially out of reach. Roughly 1 in 5 of her patients speak primarily Spanish. Some are undocumented, working in construction and other labor-intensive jobs in the region.

Despite her concerns, Engelhard said, such flat-fee practices might offer “one of the few viable options” for those living here under the radar, given they’re not eligible for ACA-related coverage. “So they are completely dependent on paying out-of-pocket for medical care,” she said.

Nationally, direct primary care is relatively new and very much a niche option. Nearly 3 percent of family physicians practice it, according to a 2017 survey by the American Academy of Family Physicians. Some critics have questioned whether the model’s growth is already stalling, after one of its earliest providers, Seattle-based Qliance, closed its clinics this year.

Graham, who practiced traditional medicine in Central Texas for decades, said she was drawn to the option after growing weary of packing too many patients into each day. She was considering leaving medicine and had started developing a lavender farm as an alternative source of income when she heard about direct primary care.

In 2015, she opened her practice in a small strip mall in Jarrell, figuring that nearby residents — with limited access to primary care — might take a chance on the different style of medicine.

Dr. John Bender, an academy board member who is part of a larger practice that’s transitioning to direct primary care, said that the low monthly fees are attracting patients who view insurance as out of reach. “I think something [in terms of medical care] is better than nothing,” said the Fort Collins, Colo., family physician, who estimates that roughly half of the practice’s 800-plus direct primary care patients are uninsured.

“I can spare them quite a few urgent care and emergency room bills,” Bender said, noting that his office handles anything from strep throat to stitches for minor gashes. Moreover, the cost is within reach of people on tight budgets, he said. “In fact, a carton of cigarettes runs $49, which just happens to be the price of my monthly subscription fee [for adults].”

In Texas, 16.6 percent of the state’s residents were uninsured as of 2016, the highest rate nationally, according to the most recent Census Bureau data. The Lone Star State didn’t expand Medicaid access and has one of the nation’s lowest income-eligibility cutoffs. A single mother with two children can’t earn more than $3,781 annually to qualify for coverage herself, according to a 2017 Medicaid report by the Center for Public Policy Priorities, an Austin-based nonprofit research and advocacy organization.

Dr. Felicia Macik, who launched her direct care practice in 2014 in Waco, estimates that 10 to 15 percent of her patients are uninsured, including some who drop coverage because they can’t afford the premiums. “I’m frightened for them,” she said. “It could decimate a family if something happened and they didn’t have any coverage.”

But Macik pointed out that getting regular primary care, rather than avoiding the doctor entirely due to lack of insurance, might avert costlier complications like an asthma attack or a diabetic crisis.

Uninsured individuals who sign up for these practices are rolling the dice, said Dr. Mohan Nadkarni, an internist who co-founded the Charlottesville (Va.) Free Clinic, which treats lower-income individuals. “For routine regular care, it may work out,” he said. “But it’s gambling that you’re not going to get sicker and need further care.” 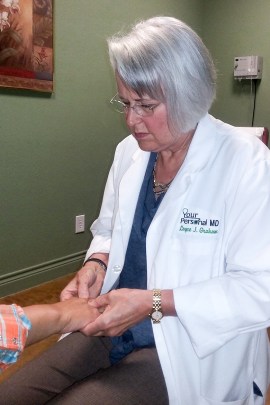 Two years ago, Dr. Loy Graham opened a flat-fee primary care practice in Jarrell, Texas. She estimates that at least 3 in 4 of her patients lack health insurance. (Charlotte Huff for KHN)

For instance, a patient can develop severe heartburn and require further tests and referrals to specialists to look for the underlying cause — potentially anything from an ulcer to esophageal cancer — that could quickly run up a hefty bill, Nadkarni said. Another patient with chest pain might need a similarly costly work-up to rule out heart problems, including a potentially life-threatening blockage, he said.

Graham said that her monthly fees cover anything that she can handle in the office. During Kenyon’s visit, she froze a small growth off one ear. Shortly afterward, she gave a steroid injection to an older woman with a painful, swollen wrist.

She has negotiated low fees with a local laboratory; the battery of blood tests and urinalysis she ordered for Kenyon cost him just under $40. “This is concierge medicine for normal people,” said the 61-year-old family physician.

Physician enthusiasts maintain that jettisoning the paperwork and other overhead costs associated with insurance enables them to take on fewer patients — roughly 600 to 800 for direct care practices compared with 2,000 to 2,500 typically, according to the family physicians academy — and thus spend more time with each one.

As A Safety Net, It’s A Stretch

Erika Miller first came to see Graham two years ago for severe headaches. The 30-year-old mother of three, who is working on her college degree and has a full-time job, doesn’t have insurance.

Graham diagnosed high blood pressure. Getting that under control helped alleviate her headaches, Miller said. She also has shed 50 pounds under Graham’s guidance.

But Graham can’t handle everything for her patients. Last year, Miller went to the emergency room at Scott & White Medical Center in nearby Temple with severe abdominal pain. It was her appendix, which had to be removed. The safety-net hospital started Miller on a payment plan based on her income, totaling roughly $500.

“If the question is: `Is [direct primary care] better than nothing?’ Then I would say, ‘Yes,’” Engelhard said. But along with leaving uninsured patients financially vulnerable to a medical curveball, she said, these smaller practices — by seeing fewer patients per doctor — risk aggravating the nation’s primary care shortage if they become more common.

Graham countered that she nearly left medicine, but these days — as she continues to build her practice — she’s reaching some patients who had previously fallen through the health system’s cracks. On that summer morning, Kenyon left Graham’s office with a prescription for a blood pressure medication and an appointment to return in several weeks to discuss his lab results.

Kenyon and his wife, Denise, later described how they had signed up last year for a family policy through the Affordable Care Act. But the monthly premium was $750 and the deductibles were $3,500 per person, Denise Kenyon said.

She called around and couldn’t find a family doctor who would take the coverage. After several months, they stopped paying the premiums, figuring that the money they saved would pay for a lot of medical care.

Both are now patients of Graham’s; their combined monthly bill totals $125, which they can budget for, Darrell Kenyon said. “I do have good months and bad months, as far as pay is concerned,” he said. “If I have a bad month, it’s still affordable.”