LOXAHATCHEE, Fla. — A Republican congressman who in 2010 lost both legs after stepping on a roadside bomb in Afghanistan told an occasionally raucous town hall meeting here that he supports his party’s push to repeal the Affordable Care Act because Americans should be free to go without health care if they so choose.

“There are positives and negatives” in the health law known as Obamacare, said Rep. Brian Mast, who noted he gets his health care from the Veterans Health Administration. “I’m not going to pretend this is the easiest thing to work through.”

That was clear Saturday morning in the high school auditorium where about 150 constituents from Mast’s South Florida district west and north of West Palm Beach sometimes booed the congressman during the two-hour meeting. They held up red placards when they didn’t like what they heard and, less often, green ones when they did. Roughly half of the 35 questions that Mast took concerned health care.

No one spoke in favor of the GOP health bill that Mast was prepared to vote for last month. It was pulled by House leaders before a vote because of lack of support.

Party leaders and the Trump administration are negotiating elements for a new plan to bring to Congress. At the same time, some Republicans back in their home districts for the Easter recess have endured similarly heated town hall meetings with constituents.

After his meeting, Mast told Kaiser Health News that his constituents’ lack of support for the GOP health bill shows the proposal needs more work before a vote. But he offered no solutions.

Many people at Saturday’s meeting asked why Mast wanted to gut the federal health law that helped them survive serious illnesses and sought to defund Planned Parenthood.

Susan Stutz, 48, of Port St. Lucie, said her health coverage under Obamacare is affordable and it has helped her and her sister get vital regular screenings for breast and cervical cancer. Both are at high risk for the diseases.

“If you take away the ACA without a realistic plan to replace it and defund Planned Parenthood, you take away my ability to know every six months if I have cancer,” she told Mast. “What am I supposed to do to stay alive?” 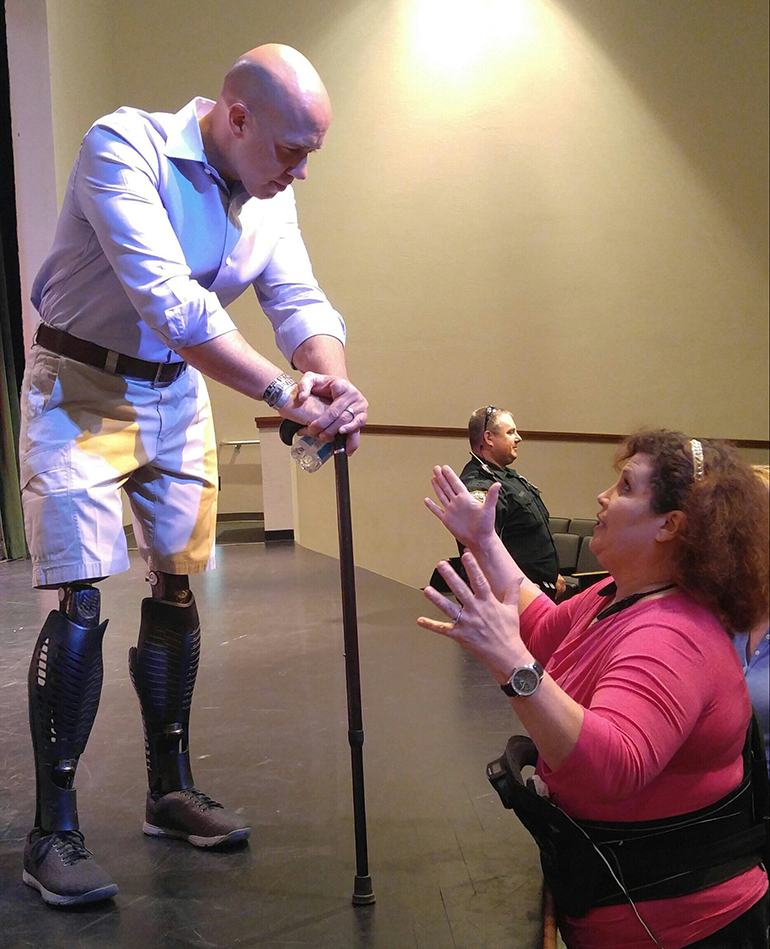 Rep. Brian Mast, who lost both legs while serving in the Army in Afghanistan, chats with Randi Solomon, a constituent who worries about losing her Obamacare coverage, at a town hall meeting in Loxahatchee, Fla. (Phil Galewitz/KHN)((Phil Galewitz/KHN))

Randi Solomon, 56, of Royal Palm Beach, said Obamacare coverage has helped her obtain back surgery and afford medications for asthma and high blood pressure. “I am really worried,” Solomon said.

Several women at the meeting asked Mast why he wanted to defund Planned Parenthood since federal law already banned federal funding of abortions. Mast replied that the nonprofit provides 300,000 abortions a year and that his concern is preserving the rights of unborn children.

Mast, 36, said he strongly supported retaining the health law provision that prohibits insurers from charging higher rates to people with preexisting illnesses. Unlike the current law, the GOP health plan would allow that benefit only for people who continuously maintain coverage.

“Preexisting conditions is something that I live with. … [It] touches our lives in personal ways, and that is never something lost on me,” said Mast, who has two prosthetic legs and spent the entire meeting in one spot leaning on a cane.

Even constituents who opposed Mast’s ACA opinions Saturday saluted his courageous service in the Army.

Mast was elected to represent the state’s 18th Congressional District after the two-term Democratic incumbent Patrick Murphy vacated the seat to run unsuccessfully for the U.S. Senate against Marco Rubio. The large district includes the wealthy haven of Jupiter Island and impoverished rural towns along Lake Okeechobee. Along with its many retirees, the region counts on tourism and agriculture as mainstays of its economy.

Mast gained national publicity in March when he delivered an impassioned plea to his House GOP colleagues to unite to pass the GOP health plan, likening the effort to his military unit working together to beat the enemy combatants in Afghanistan.

Scott Webber, 62, of Hobe Sound told Mast that Obamacare provided affordable coverage for him and his wife and asked Mast how he could support the GOP bill when it received so little support in public polls.

Mast responded that Obamacare premiums are in a “death spiral” because too few young, healthy people have signed up, which has forced up prices. “I hope we can get to a point so you can have lower deductibles and lower premiums,” he said.