While the White House has focused on enrolling the country’s Hispanic population in health plans, a group of Haitian-American insurance agents in South Florida have seized the opportunity to bring health coverage to their own communities, where they estimated seven out of 10 people are uninsured. 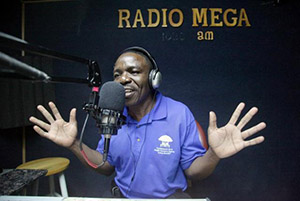 “I call myself an activist, not an insurance agent,” said Raymond Francois, who hosts a local radio show in Creole when he’s not working as an insurance agent or as director of the New Vision Taxi Drivers Association in Miami-Dade County. “I want people to be able to see a doctor instead of waiting until they’re so sick they have to go to the emergency room.”

Together, Francois and about 40 other agents have signed up 4,000 people for health coverage, he said. They hope to sign up another 1,000 by March 31 when the open enrollment period ends.

People earning $11,500 to $20,000 — like Emithe Dujour of North Miami, a 61-year old security guard with two children covered by Medicaid — typify the agents’ customers. Virtually all qualify for generous tax credits under the health law. And virtually all, like Dujour, choose silver- or gold-level plans that cost little or nothing after tax credits are applied.

“I didn’t have insurance. I got a very cheap plan and I’m very happy with Obamacare,” Dujour said.

The agents began educating themselves about the health law and planning their campaign in 2011, according to Derosier. They printed 50,000 fliers and distributed them twice after the healthcare marketplace opened. They hired people to go door-to-door in the largest Haitian-American neighborhoods. And they made sure they had offices — eight in total — in all of them.

“Good morning everybody,” Francois said, smiling at the clients waiting to apply for health plans at his North Miami Beach office Monday morning. His framed engineering diploma hung on the yellow wall above his desk, though he’s been unable to find a job in his field.

“Raymond is the one you can talk to,” said Celimene Alpazile, 63, a part-time taxi driver from Miami Gardens who had stopped by the office hoping to get health insurance for the first time in his life. “He wears his Obamacare T-shirt at the airport taxi lot so those of us who don’t have time to learn about it can ask questions. The drivers feel good about it because he’s one of us.”

Another Haitian-American reaching out to the South Florida community is Louinel St. Albord, host of radio news talk show Mosaïque, which airs in Creole daily at 5 p.m. on Radio Mega. Since the health care marketplace opened in October, one of his most frequent topics has been Obamacare.

“I’m a registered nurse, so I know the importance of preventive health care,” said St. Albord, who works at Carter Healthcare and moonlights as an insurance agent for Fundamental. With a week still to go, St. Albord said he’s sold 1,000 Obamacare plans.

Haitian community churches were a big part of Fundamental’s marketing effort. “You name the church, we would go to the church,” St. Albord said.

But radio is the most accessible way to reach the Haitian community, said the show host, who used to broadcast a similar program in Port-au-Prince. “In Haiti, if 60 percent of families have a TV; 90 percent have a transistor radio. The appetite for radio probably carries over to Haitian communities in the U.S.,” St. Albord said.

The agents originally had hoped to enroll 10,000 people, half of what they expect to achieve by March 31. “It’s a new program, so there’s still a lot of uncertainty and unknowns,” Derosier said.