Almost overnight, Florida has gone from being an ardent opponent of the federal health care law to a laboratory for an ambitious experiment under the law. 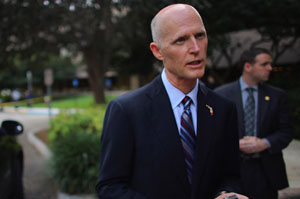 Florida Governor Rick Scott speaks to the media after he toured the manufacturing facility at Beckman Coulter, a biomedical laboratory instruments manufacturer, on January 10, 2013 in Miami, Florida (Photo by Joe Raedle/Getty Images).

If state lawmakers back Gov. Rick Scott’s plan to expand Medicaid, it will be an experiment with a determinedly free-market twist. Scott’s turnabout on the Medicaid expansion came a few hours after the federal government tentatively approved his application to fully privatize the federal- state program for the poor.

That development has put health providers and consumers in a quandary: Most are elated that more than 1 million Floridians are in line to gain health coverage starting next year and that hundreds of millions in federal dollars will flow into the state to cover their medical services. But they’re also concerned that that coverage will be delivered through managed care plans with a mixed record of providing quality care in Florida.

Consumer groups worry about whether the health plans will have enough providers, especially in rural areas, and whether they’ll approve services in a timely way.

Nursing home operators fear that for-profit insurers may try to move residents into lower-cost settings even when that may be unsafe.

And doctors and hospitals say they’re concerned about getting paid on time and about having trouble getting services approved for their patients.

“Hospitals’ experience with managed care varies plan to plan in the ability to get patients into the right level of care … and plans paying claims efficiently and in a timely manner,” said Bruce Rueben, president of the Florida Hospital Association.

Scott is not the first Republican governor to support the Medicaid expansion, which the Supreme Court made optional for states when it upheld the health care law last June. The governors of Ohio, Arizona, Michigan, Nevada, North Dakota and New Mexico preceded him. But Scott’s decision is arguably more significant due to his state’s size (19 million people), its large number of uninsured (4 million) — and his outspoken opposition (he refused to acknowledge the law until the Supreme Court upheld its constitutionality.)

Florida’s Past Experiments With Managed Care

If the Republican-controlled Legislature approves his plan when it meets next month, Florida would also become one of the largest to require virtually all recipients of Medicaid to enroll in private managed care plans which can limit which health providers patients can see.

Other states that have put nearly all their Medicaid recipients in managed care include Arizona, Tennessee, Kentucky and Pennsylvania, according to Joe Moser, interim executive director of Medicaid Health Plans of America, a trade group. “It’s a proven model and not a new concept,” he said.

About two-thirds of states already use managed care companies as a part of their Medicaid programs. Florida has done so for nearly two decades, with more than a third of its 3 million Medicaid recipients in the private health plans. These HMO-style plans get paid a set amount of money by the state to provide coverage, and the enrollees generally get care only from doctors, hospitals and other providers who have contracts with the plans.

And in five counties, including those in Fort Lauderdale and Jacksonville, it has run a pilot program mandating most recipients be in managed care. Originally there were a number of problems, including patients having trouble getting access and patient confusion about the plans. In addition a number of plans dropped out because of fears about losing money.

A 2009 University of Florida study, however, showed the pilot, which did not include those needing long-term-care, helped save the state about $100 million a year without increasing consumer complaints. But the study could not determine whether the savings came from the plans providing less care or being more efficient.

Under the tentative deal approved last week by the administration, virtually all Medicaid recipients would have to enroll in such a plan, including more than 100,000 living in nursing homes and those receiving long-term-care services at home and in community-based settings.

“People have a right to be concerned about quality of managed care because it does not have a strong track record in Florida,” said Joan Alker, co-executive director of the Georgetown University Center for Children and Families.

But Republican lawmakers who control the legislature say they have addressed past shortcomings with better oversight of managed care companies, increased reimbursement for doctors and more stringent penalties, including fining plans up to $500,000 if they drop out.

The managed care industry says it can improve care and lower costs by making sure patients get preventive services and have care overseen by a primary care doctor.

“We will bring the benefits of coordinated care to all low-income Floridians and give them access to a primary care medical home, comprehensive care management, and disease management programs,” Moser said.

Long-Term Care Is A Key Challenge

One of the biggest challenges will be moving the elderly and disabled into managed care plans.

Robert Beck, a lobbyist who represents home and community-based long-term-care providers, said the state has few personnel to assist in the enrollment of the 40,000 people needing home and community-based services through Medicaid. He said the state promises to mail information to people getting long-term-care services, but he doubts most will even open the letter. If people don’t choose a plan the state will automatically choose one for them.

“Any 85-year-old woman with dementia does not do well applying for Medicaid,” Beck said.

Kristen Knapp, spokeswoman for the Florida Health Care Association, which represents nursing homes, said there are also concerns that plans may try to move residents out of institutions even though they need to be there. About 60 percent of Florida’s 71,000 nursing home residents are on Medicaid.

“We think there is a very small fraction of people who potentially could be transitioned safely to an alternative setting,” she said.

As a condition of its approval, the Obama administration is requiring an independent authority to monitor the transition and also to measure quality-of-care requirements, an agreement that critics of the managed care industry praised.

“We are happy the administration listened to us and put transparency and accountability in place for the managed care plans so care is adequately delivered and people can access the benefits,” said Laura Goodhue, executive director of Florida CHAIN, a consumer advocacy group.

Dr. Aaron Elkin, a Hollywood, Fla., obstetrician/gynecologist, said he is thrilled the state will allow Medicaid to expand, but remains wary of the private health plans and “the hoops they make doctors and patients go through.”

Elkin, past president of the Broward County Medical Association, said the health plans have improved, but they still need to pay doctors more to get broader participation.

“Our experience has been dismal,” he said of providers, “but most patients don’t complain because they are getting free care.”

Alvin Tran contributed to this story.