Chris and Alicia Johnson have 10 kids — three biological, five adopted out of foster care and two foster children — all under one roof on the outskirts of Orlando, Fla.

While providing love, support and encouragement for their foster kids, they’ve sometimes run into roadblocks trying to get them health care, including needed mental health services, because few providers take Medicaid insurance.  Another problem? Not being able to take foster children in different health care plans to the same doctors.

Those difficulties are not unusual for the nation’s nearly 400,000 foster children, whose health care can be complicated by cycling from one placement to another, undiagnosed childhood trauma and a failure to receive preventive care, according to experts. 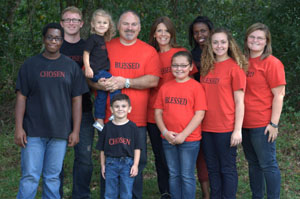 They face an array of problems. According to the National Institute for Health Care Management, nearly 60 percent have at least one chronic disease, and nearly 70 percent have moderate to severe mental health disorders.

Florida is creating a special Medicaid plan to closely manage the care of this population, beginning in May.  The plan is designed to cover the estimated 31,600 Florida children in the welfare system, including those in foster care, placed with relatives or in group homes. In the Miami-Dade and Monroe region alone, there are 3,125 children eligible, according to the Florida Agency for Health Care Administration (AHCA).

In Florida, foster children are automatically enrolled in Medicaid, the joint-state federal health program. Sunshine Health, a subsidiary of Centene Corp., is responsible for Florida’s Child Welfare Specialty Plan. The five-year contract is valued at $1.1 billion, according to agency officials.

Sunshine Health said it is taking a holistic approach, covering physical and behavioral health, dental care and other services, with a network of more than 30,000 providers. Care managers help oversee children’s social needs, as well as their health.

“It’s all integrated,” said Sunshine Health CEO Chris Paterson. “If there’s a missing piece of health care, say a child is missing a vaccine, the community-based person is going to know that and help us get that child to the doctor.”

Paterson also said the company believes it can’t provide quality health care without looking at the children’s social needs. The plan allocates about $150 per child, to be spent at the care manager’s discretion, for items such as a baseball glove for a kid who wants to try out for a team or a new dress for a girl who wants to go to a school dance.

The idea is to close some of the gaps in care that often occur with children in foster care. When children have been moved around, “it’s hard to put the pieces of the puzzle together,” says Dr. Moira Szilagyi, chairwoman of the National Council on Foster Care, Adoption and Kinship Care for the American Academy of Pediatrics.

“If a provider has not stepped back and looked at the larger history of abuse, multiple families, needs being neglected, they may put children on medication that may or may not benefit the child,” Szilagyi said. “They may not see it’s the impact of childhood trauma.”

“(Foster children) can be a fluid population in terms of providing adequate services to them,” said David A. Rogers, assistant deputy secretary for Medicaid. “There’s a uniqueness there that makes them a good target population” for managed care.

Szilagyi said she’s had patients who come in with five or six different diagnoses. Once doctors understand the children’s backgrounds better, they’re often able to get them the right mental health services.

“In some ways, insurers who specialize or have an expertise in care of high-needs populations may have less risk (caring for them)…it’s not to say there aren’t any risks, but with the general population, you don’t know whether there’s going to be unanticipated risks.” Specialists are more likely to know what to expect, she said.

Florida is not alone in taking this approach. Tennessee and Texas have already moved foster children into managed care, and Georgia plans to do so later this year.

Carolyn Ingram, senior vice president at the nonprofit Center for Health Care Strategies, and a former director of Medicaid in New Mexico, said states need to pay higher rates to insurers managing the care of high-needs populations, including foster kids, because they cost more, but those costs will pay off in better health.

“If you don’t do managed care for the high-needs population, then you’re not going to change the health of those people.”

Chris Johnson, a senior pastor at Liberty Baptist Church, and his wife Alicia, said they decided to become foster parents in 2009 after praying on the need for more good homes. Their most recent foster kids will be eligible for Florida’s new managed care plan. And Johnson said he can use the help in getting them the care they need. “It’s challenging,” he said.