About 15 storefront businesses across Florida claim to help thousands of customers each year place online orders from pharmacies in Canada and overseas for medicines at prices up to 70 percent off what people pay in the U.S. The reason is other countries regulate consumer drug prices — the U.S. does not — and some cheaper generic medicines are sold there before the U.S. market gets them.

Federal authorities say the practice is illegal and dangerous because the U.S. has not reviewed the safety of some drugs approved for sale in foreign countries or they could be counterfeit. But since the first storefront opened in 2002 in Delray Beach, Florida, the government has never charged shops or their customers, according to operators and researchers who follow the business.

The shops seemed to face a grim future 10 years ago when Medicare began covering prescription drugs, sparking expectations that seniors would no longer struggle to afford medications. “We thought that would be the end of the business,” said Janelle Quinn, owner of Discount Med Company in St. Petersburg. The trade’s surprising survival spotlights both seniors’ continuing difficulties with medication expenses, and how far some people will go to save money.

Florida’s storefronts are found in retirement havens, including areas of Tampa, Lakeland, Orlando, Melbourne and Miami. Similar operations exist in a few other states, but the Sunshine State is thought to have the most.

The most visible name is Canadian MedStore, which opened its first location in 2003 and now has six in central Florida.

Each one serves several hundred customers a year, about 80 percent of whom are over 65, according to co-owner Bill Hepscher. Most of them have Medicare coverage for prescription drugs, but the portion they still must pay, including copays and deductibles, is often a burden, Hepscher said. In addition to absorbing copays and deductibles, beneficiaries’ expenses also rise if they hit the “doughnut hole” coverage gap in most Medicare drug plans, exposing them to higher out-of-pocket expenses for prescription drugs until those reach $4,850 annually. 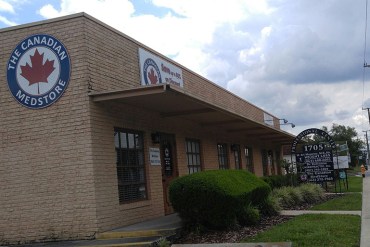 The Canadian MedStore helps Americans buy discounted prescription medicines from pharmacies outside the U.S. Its store in Lakeland, Florida, is a block away from a hospital. (Phil Galewitz/KHN)

The average retail price for 397 widely used drugs increased 81 percent from 2006 through 2013, compared with an 18 percent increase in inflation in the same period, according to AARP.

That climate drives the market for outlets like Hepscher’s and Quinn’s. “We are a resource for people who can’t afford to pay for their medications,” he said.

Savings of 60 to 70 percent are not uncommon, according to the storefront owners.

“A lot of time, we can get drugs for them at less than their copay,” said Quinn.

About 2 percent of Americans, or 5 million people, buy drugs from foreign pharmacies, according to a federal survey in 2011. The nonprofit Canadian International Pharmacy Association, which verifies the legitimacy and safe practices of online pharmacies outside the U.S. that sell to Americans and Canadians, estimates its members’ 64 websites supply about 1 million U.S. customers a year.

Many consumers do their own online buying from foreign pharmacies. Canadian MedStore and other storefront operators target an older generation interested in buying medicines abroad but who lack computer savvy and are insecure about buying online by themselves.

Another significant market for the stores is selling drugs for erectile dysfunction such as Viagra which often are not covered by insurance and cost as much as $20 per pill.

Hepscher mainly ordered drugs from pharmacies in Canada when he started. A few years ago, he began doing business with pharmacies in England, New Zealand and India because the prices were lower than Canada. On top of that, Canadian supplies of some drugs tightened about eight years ago when drug makers cut back sales to Canadian pharmacies to prevent them from filling so many U.S. orders.

Storefront owners say they use only foreign pharmacies certified by government agencies or the nonprofit Canadian association. The drugs themselves, some point out, are often made in the same manufacturing plants around the world as drugs sold in the U.S. pharmacies.

Quinn and other storefront owners emphasize they are not pharmacies subject to many state and federal laws. “All I am is an order taker,” she said. Customers must present valid prescriptions to place orders. 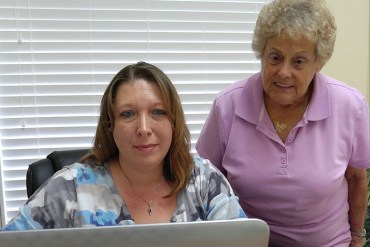 Evelyn Dumond, 74, reviews drug prices at the Canadian MedStore with store employee Sharon Hardin in Lakeland, Florida. The store is one of about 15 across Florida that help consumers buy drugs online from pharmacies in Canada and other countries. (Phil Galewitz/KHN)

Unlike pharmacies, storefront operations don’t stock medications. Instead, a few employees who work on computers in sparsely furnished offices assist customers in online ordering. Only chronic medications, the kind people take for months or years, may be obtained with the storefronts’ help. Delivery usually takes two or three weeks.

Consumers pay the foreign pharmacies — in full by check or credit card since no insurance is involved — and the U.S. storefronts collect fees from the pharmacies.

First-time customers come to his shops to place orders, but they often call in subsequent ones, Hepscher said.

Retired nurse Evelyn Dumond, 74, was a recent customer at Canadian MedStore in Lakeland.

Dumond told one of the two MedStore employees on duty that morning she was struggling to afford medications for her husband, Thomas, and herself, even though both have drug coverage under Medicare. Their regular pharmacy had said the Dumonds’ portion of the cost for a drug prescribed for Thomas’s enlarged prostate would cost nearly $500 for a 90-day supply.

A doctor recommended she try Canadian MedStore. After an online price check, the MedStore worker told Dumond she could get the same medicine for $160 from Singapore — a 68 percent savings — if she ordered from MedStore.

“That would be great,” Dumond said, as she handed over her prescription and credit card information for MedStore to give the foreign pharmacy. Two weeks later, a generic form of the drug arrived from Singapore.

Another MedStore customer reached to New Zealand for his savings. Ken Stevenson said he ordered brand-name and generic versions of the arthritis drug Celebrex. The Celebrex cost $150 and its generic version, $75. At a Tallahassee pharmacy, Celebrex alone would have cost him $300 in out-of-pocket costs after insurance, he said.

“I’m a believer,” said Stevenson, who is president-elect of the Florida Association of Health Underwriters, a trade group for health insurance agents. “We are in a world economy…and if you can get a drug from another country at a lower price, why not do it?”

The answer is, it’s illegal to import drugs into the U.S. and the storefronts’ business is also illegal, said Food and Drug Administration spokesman Christopher Kelly. Federal law, he said, is unambiguous.

Drugs can only be imported from foreign pharmacies in limited cases, such as when a medication is not available in the United States, according to Kelly.

The FDA’s website carries an explicit warning: “When buying medicines online or from so-called ‘store-front’ pharmacies, consumers enter the world of what could be unsafe and risky products. Prescription medicines bought outside of the U.S. may be old, poorly manufactured, improperly stored or even counterfeit (fake or tampered with).”

Sean Gregory, assistant professor of health policy at the University of South Florida in Tampa, said he’s not surprised the Bush and Obama administrations have let the imported drug stores stay open.

“If they clamped down on these storefronts, it would be seen as restricting access to affordable drugs and supporting big bad [drug] corporations,” he said. “The administration is saying that they are against this as a matter of policy, but programmatically [they] are not doing anything about it.”

That’s what some of Quinn’s customers at Discount Med discovered when they had a brush with U.S. authorities in 2006.

At the time, U.S. Customs and Border Protection was routinely seizing mail-order packages of prescription drugs entering the U.S. from Canada, and some of Quinn’s customers were affected.

After Sen. Bill Nelson, D-Fla., intervened, the seizures were halted.