Cecilia Ramirez is worried about her weight and troubling symptoms that hint of diabetes, but she won’t seek medical help because she can’t afford it.

Though she is a sales worker at an insurance agency in Highlandtown, an East Baltimore neighborhood that has seen an influx of Hispanic immigrants in recent years, Ramirez, 23, has no health insurance.

Her predicament is shared by thousands of Hispanic immigrants in East Baltimore, and millions nationally, who cannot afford regular medical services and are uninsured because they lack the benefits attached to legal U.S. residency and citizenship.

Ramirez’s parents came illegally to the U.S. from Mexico when she was 10. Her immigration status now — “lawfully present” — allows her to work and study here without fear of deportation, but she has no path to citizenship. She is ineligible for health coverage under the Affordable Care Act or any public insurance program.

(The Supreme Court’s decision last week in a related immigration case did not change this.)

Her $23,000 annual income would easily qualify her for Medicaid, but only her two young children can get it. Ramirez’s employer can’t afford to offer her private health insurance either, and even if it did, she doubts she could afford it. So, how can Ramirez deal with the hacking from her lungs?

“Vicks VapoRub,” offers her boss, David Rosario, drawing cynical laughter from Ramirez and others in the office.

Latinos, uninsured or not, face many challenges when it comes to finding medical care. Many have trouble speaking and understanding English, are poor and undereducated, or lack transportation. Others come from cultures where health care is a luxury they don’t regularly seek out. 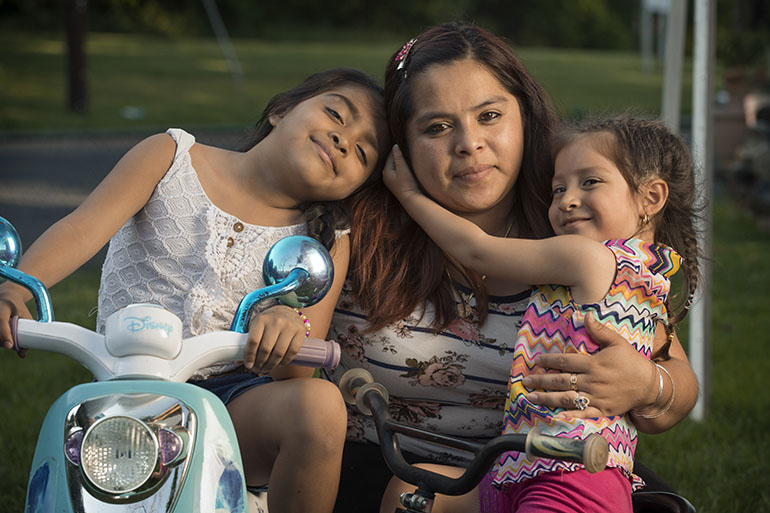 Cecilia Ramirez and her two daughters, Jenny Rodriguez-Ramirez, 7, and Kimberly Gonzalez-Ramirez, 3. The girls qualify for Medicaid because they were born in the U.S., but their mother does not because of her immigration status. (Doug Kapustin for KHN)

But the inability of non-citizens to join affordable health plans remains the primary stumbling block separating people from Mexico, Central America and South America from care.

“What we’re seeing across the country is that the undocumented are one of the most vulnerable groups out there when it comes to insurability,” said Steven Lopez, manager of the health policy project at the National Council of La Raza, the largest Latino advocacy group in the U.S. “The opportunity to get regular health care is the key to finding greater opportunity. If you don’t have your health, you’re not going to progress in life.”

Nationwide, more than 5 million people living in the U.S. illegally are without medical coverage, with indications that most are Hispanic, according to an Urban Institute report released in March. Nearly half of all immigrants living here without permission are uninsured, compared with 10.5 percent of U.S. citizens and roughly 15 percent of non-citizens living here legally, the report noted. Hispanic adults’ uninsured rate fell to 28 percent last year — 13 percentage points below 2013 — but remains far higher than those of non-Hispanic whites, blacks and Asians, according to federal statistics released in May.

“This is the tricky part for us,” said Leana Wen, Baltimore’s health commissioner. “The Affordable Care Act excludes these individuals” who lack authorization to live in the U.S. “They fall through the cracks.”

They have done so even as Mayor Stephanie Rawlings-Blake works to draw more immigrants here in the hope they will repopulate hollowed out inner-city blocks. Latinos, who figure prominently in the mayor’s drive to recruit 10,000 new families, continue to filter into several older East Baltimore neighborhoods, including Fells Point, Greektown, Highlandtown and Patterson Park.

Baltimore’s population includes around 30,000 Latinos, up from just 9,000 15 years ago, city officials say. Medical providers and Latino advocates say that 40 to 60 percent of them live in the U.S. illegally, a range close to the Urban Institute’s national estimates.

Health is a major concern. Baltimore Latinos are twice as likely as non-Latinos to say they have poor or fair health, according to a city health department survey in 2011.

“People can start businesses and buy homes, but they can’t get medical insurance,” said Rosario, who serves as board president for the Latino Providers Network, an organization that links Hispanics to services. 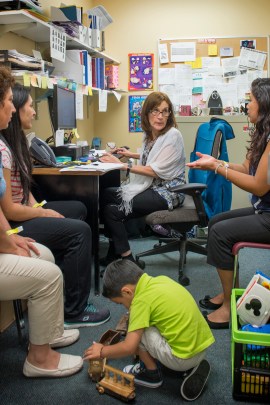 Working out of an office within Johns Hopkins Bayview Medical Center in Baltimore,  social worker Flor Giusti converses with Latino patients in her office there. (Doug Kapustin for KHN)

As a result, health providers say that when they see people come into their offices or clinics, they are often in advanced stages of illness.

“Typically, we see a lot of diabetes and obesity-related diseases, like high blood pressure,” said Kathleen Page, an infectious disease specialist at Johns Hopkins Hospital and a cofounder of Centro SOL, a Bayview outreach program that treats Hispanic clients at reduced prices. Baltimore Latinos suffer higher rates of those disorders despite being younger as a group than the rest of the city’s population. Chronic infections and mental health problems such as anxiety and depression run rampant, Page added.

About 95 percent of the Hispanic patients she sees at her HIV clinic are living here illegally and lack health insurance.

Latinos’ ability to find treatment is tied directly to their immigration status.

Some people in the U.S. without documentation can receive payments for baby deliveries through Emergency Medicaid. Federally qualified health clinics offer basic medical care to thousands of the uninsured at reduced rates, with no questions asked about status, but the federal government offers no insurance options for those living in the U.S. without permission.

Insurability can vary even within households, reflecting mixed immigration status among family members. Cecilia Ramirez’s mother, who does not have permission to live in the U.S., long remained uninsured, putting off treatment for uterine fibroids for years because she was worried about the cost of care.

Meanwhile, Ramirez’s children, 7-year-old Jenny and Kimberly, 3, receive insurance through Medicaid. Because they were born in the U.S., giving them citizenship, and they meet Medicaid’s eligibility standards, they are able to see primary care physicians and get other care if needed. Much of it is paid for, unlike their mother’s. 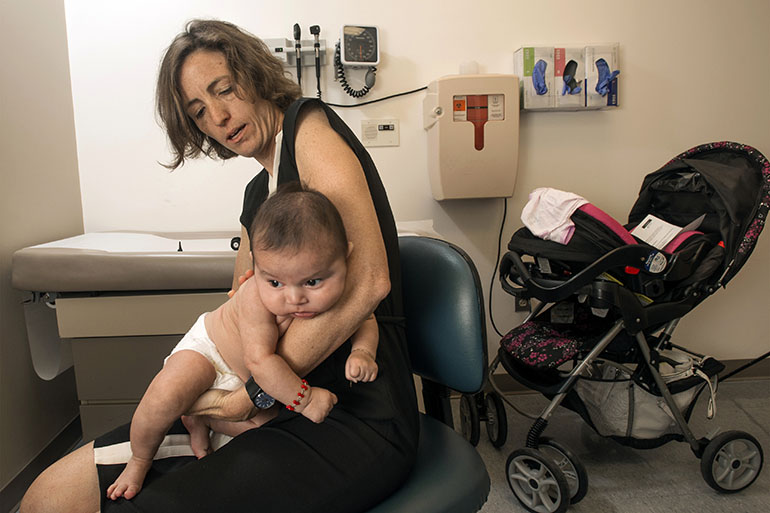 Dr. Sarah Polk, a pediatrician, provides care at the Centro SOL center at Johns Hopkins in Baltimore to patients like Janexy Marquez-Ramirez. (Doug Kapustin for KHN)

As a foreign-born child of immigrants who entered the U.S. without permission, Ramirez’s access to health care is problematic. She applied for and received “lawfully present” status under a 2012 Obama administration policy that allowed people who arrived in the U.S. before age 16 and are now under age 35 to work and study in the U.S. without fearing deportation. Some 665,000 others have also received such status nationwide, according to figures from the Department of Homeland Security. But they were also excluded from gaining health insurance under the Affordable Care Act by a related policy of the Department of Health and Human Services. Some states, including California and New York, have softened their standards and enrolled some people here illegally in Medicaid. But nationally, most remain without coverage.

To help people like Ramirez and other low-income people without permission to live here, several institutions in East Baltimore have cobbled together an array of medical services outside of typical hospital settings. Baltimore City, Johns Hopkins Bayview, two federally subsidized clinics and one charity-run clinic offer bilingual interpreters, health providers who speak Spanish and, perhaps most importantly, low fees and sliding scales for care.

The Access Partnership, or TAP, a Johns Hopkins charitable program, offers diagnostic tests and visits to specialists for very low fees, usually no more than $20. The program serves people who lack insurance, make 200 percent or less of the federal poverty level and have been local residents for six months. More than 90 percent are Hispanic, and none are asked if they are living in the U.S. illegally, said Barbara Cook, the group’s medical director.

Cecilia Ramirez’s mother got diagnostic tests and subsequent surgery a little over a year ago to remove her uterus with help from TAP. Nonetheless, Ramirez wonders if the outcome would have been better if she had gotten help earlier.

“If she had had insurance, she might have sought out care, instead of having to wait so long that they had to remove part of her body,” she said.

For Many In Baltimore’s Growing Latino Community, Health Care Is A Challenge