A former foster child without health coverage for the past four years, Valenzuela was determined to sign up for insurance. But when the 25-year-old Whittier resident handed her Medi-Cal application to an enrollment worker, the employee looked bewildered.

A little-known provision of federal health law now extends Medicaid coverage to former foster youths until they turn 26, regardless of where they live or how much they earn. The only requirements: They must have been in foster care when they turned 18 and have previously received Medicaid, the state-run insurance plan for the poor known as Medi-Cal in California. 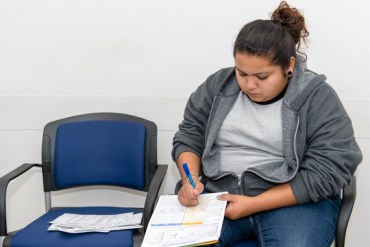 Marcy Valenzuela, 25, applies for Medi-Cal at the Department of Public Social Services in El Monte, Calif., after being uninsured for the last four years (Photo by Heidi de Marco/KHN).

Nationwide, an estimated 180,000 former foster youths are eligible and another 25,000 will qualify each year, according to the child advocacy group First Focus, which worked to get the provision into the Affordable Care Act.  Youths are entitled to coverage even if they live in states that aren’t expanding their Medicaid programs.

The measure is designed to give the former foster kids similar opportunities to other young adults, who can stay on their parents’ insurance until their 26th birthdays.  The law applies to youths who have aged out of foster care since 2007.

“We don’t have our parents,” Valenzuela said. “The state is pretty much our parents.”

But many enrollment workers are unaware of the provision, raising the risk that the young adults who are entitled to the coverage will be wrongly denied.

There isn’t a universal database of foster children, and social service providers may not easily be able to find them in county computer records. And the youths may not have evidence of their time in the child welfare system.

An even greater obstacle, according to advocates, is that a state is not required to provide Medicaid coverage to young adults who aged out of foster care in another state. Youths who have moved across state lines since their time in foster care may not qualify.

In addition, the former foster youth themselves may still be unaware that they are eligible for the free coverage, which includes preventive care and vision, dental and mental health services. Organizations that work with foster youth are trying to inform them through alumni groups, social service providers, community colleges and health clinics.

“It’s a shotgun approach,” said Mary Frame with Walden Family Services, which serves current and former foster youth throughout Southern California, including San Bernardino and Riverside counties. “You never know where you might meet a former foster youth.” 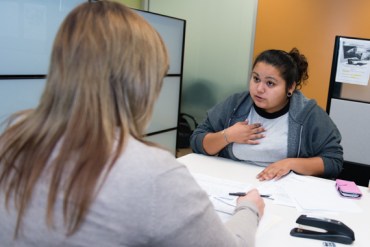 The eligibility worker at the Department of Public Social Services county office tells Marcy she needs proof that she was in foster care (Photo by Heidi de Marco/KHN).

Getting the word out can be difficult. Former foster kids often disappear from the system and end up on the streets.

“It’s gonna be hard to find them,” said Valenzuela, who is a paid outreach worker for California Youth Connection, an organization that serves former foster youth.

“A lot of former foster youth don’t want to say they were in foster care,” she said. “We don’t want that label.”

Most children are covered under Medicaid while in foster care, and in some states, including California, that coverage continues until their 21st birthday. Afterward, they often become uninsured.

Thomas Lee, who works with former foster youth in Pasadena and the San Gabriel Valley, said he has seen young adults delay much-needed medical or mental health care because they can’t afford it.

Lee’s organization, Hillsides, tries to get them and  jobs that offer insurance so they don’t experience any gaps in care.  Now, young people aging out of the foster care system will have a reprieve for a few more years, he said.

“It is a huge step in the right direction,” Lee said.

Jazzmin Marquez, whose biological mother was addicted to drugs, grew up in foster care. She aged out when she turned 18 and was uninsured for a few years before getting a job at the YMCA that offered her insurance. But she had to drop it because she needed the money she paid each month for rent.

She applied for Medi-Cal late last year but was denied because her income was just over the limit. After learning of the coverage available to former foster youths, she reapplied. Again, Marquez said she was denied based on her income – which should not have been a factor under the rules governing former foster kids.

“I was very upset, frustrated and stressed out,” said Marquez, who lives in San Diego County.

Marquez, 23, said she has undiagnosed stomach problems, including pain and nausea, which have kept her off work for weeks at a time and caused her to drop out of college for a semester. Last year, she ended up in the emergency room and still owes about $6,000 in medical bills.

Former foster children are more likely than their peers to have physical and mental health problems, often as a result of abuse or neglect that caused their placement in foster care to begin with, studies have shown. They are also more likely to be homeless and incarcerated, which can worsen their health.

“Times really are tough for young adults all over,” said Ed Walz, vice president of communications for First Focus. “But they need this care much more than their peers do.” 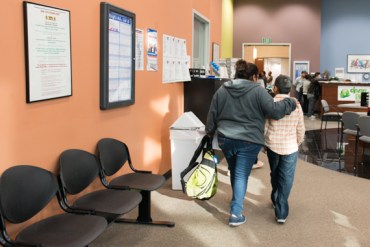 Marcy Valenzuela leaves the Department of Public Social Services El Monte office with her younger brother after being told she needs to return to complete her Medi-cal application (Photo by Heidi de Marco/KHN).

States should make the enrollment process easy – or even automated − for foster youths, said Michael Pergamit, a senior fellow at the Urban Institute.

“They are literally on their own,” he said. “The idea that they should have to negotiate a very complex system is asking a lot of them.”

Marie Ary, 24, who lives in Sacramento, has gone without insurance for three years. Though she believes she is healthy, Ary said she is anxious to get a check-up to make sure.

Ary said she is still looking for the right place to sign up for Medicaid so she doesn’t get incorrect information or get denied coverage.

“It is already stressful not having had it for so long,” she said. “I would rather not go through that headache if I don’t have to.”

Valenzuela said she dreaded her 21st birthday. “When you turn 21, you’re supposed to celebrate,” she said. But for her, it just meant the end of her health insurance. “You don’t realize how important it is until it’s gone.”

Valenzuela was born to a drug-addicted mother and said she spent her childhood in and out of foster care and enduring abuse by relatives. By the time she was 18, Valenzuela had become addicted to drugs herself and spent time in detention.

Now sober, Valenzuela is a guardian for three of her younger siblings, ages 11, 14 and 17. She has a tattoo of a Joan of Arc quote across her chest: “I’m not afraid. I was born to do this.”

Valenzuela said she wants health insurance so she can see specialists for her gastritis, rheumatoid arthritis and chronic pain. She also has panic attacks and anxiety, though she has been able to keep seeing a therapist through a special program for former foster children.

At the county office, the eligibility worker asked for Valenzuela’s pay stubs from her job as an outreach worker. Valenzuela politely said she didn’t believe she had to show her income to qualify.

Then the worker asked for proof that Valenzuela was in foster care. Valenzuela said she thought the county would be able to verify that in their computer system.

The eligibility worker couldn’t find any records but said she would keep trying. “Do you want to make an appointment to bring back these documents?” she asked. Valenzuela left the El Monte office, her arm around her younger brother.

A few days later, another county worker was able to confirm that she had been in foster care. She told Valenzuela that her insurance should be active in just a few weeks.

Though relieved, Valenzuela felt drained. It shouldn’t be this hard, she said.

As a former foster child, Marcy Valenzuela qualified for free Medi-Cal coverage. But that benefit only lasted until her 26th birthday last August.

When the benefit expired, she reapplied for the program as a low-income adult.  Valenzuela, a community college student, had worked as an outreach worker to foster youth, and knew she qualified. But a mix-up about her income left her without health coverage for almost a year.

During that time, Valenzuela, who cares for her younger brother and sister, continued to have stomach problems. At one point, the pain was so bad that she went to the emergency room for treatment. She soon received a $3,000 bill.

She said she called the Medi-Cal office several times. “I would call constantly and nobody ever answered,” she said.

Finally, she showed up in person and a worker was able to help. “They had it all messed up,” she said.

Valenzuela recently received her card and as soon as school ends, she plans to find a regular doctor who can start to help her figure out what is wrong with her stomach. She also wants to find a specialist to treat her rheumatoid arthritis, which causes her knees to give out and her wrists to hurt.

If she was on regular medication or therapy, Valenzuela said, she might be able to play volleyball with her sister or take walks with her brother.

And if she had a primary care doctor, she wouldn’t have to go to the ER for care, Valenzuela said. “I don’t like that I have had to wait until it’s so painful,” she said.

Though she hasn’t had the best experience with Medi-Cal so far, Valenzuela hopes   things will get better – and that she can stay on  the program  indefinitely.

When Your Parent Is The State, It’s Tough For Young Adults To Stay Insured