He is still waiting. The VA lost his original paperwork and hasn’t yet approved a new application, he said.

“It’s frustrating,” lamented Franco, 46, who served in Iraq as a U.S. Marine. “I am a veteran. The VA is supposed to be there for me.”

Over the past three years, the sprawling VA system has come under fire from Congress and the media because veterans were waiting too long to see a doctor. Mental health appointments have been particularly difficult, and that can be dangerous for veterans. Studies show up to 20 percent of soldiers returning from battle in Iraq and Afghanistan suffer from post-traumatic stress disorder.

Now, a new chain of free mental health clinics for vets has opened in five cities across the United States to fill the gap.

The much-needed new treatment is underwritten by an unlikely benefactor: Steven A. Cohen, the former head of a hedge fund that pleaded guilty to insider trading charges in 2013. His $13 billion fortune puts him among the 100 wealthiest individuals in the world, according to Forbes magazine.

Cohen said the catalyst for the clinics was his son, Robert, who served with the U.S. Marine Corps in Afghanistan. He said his son didn’t need counseling when he returned, but many of his friends did.

“I got lucky,” Cohen said. “My son came back in great shape, but not everyone is that fortunate.”

Cohen got involved with veterans’ mental health issues in 2011 through the Robin Hood Foundation, an anti-poverty organization. Then he began supporting the NYU Military Family Clinic. Now, he is investing $275 million nationally in the clinics and plans to open roughly 20 more over the next five years. The goal of the clinics is to provide confidential mental health services, free of charge, for veterans like Franco.

“Veterans are suffering,” Cohen said in a written response to questions. “They went overseas and paid an extraordinary debt that we need to repay. The goal of my network is to help pay back that debt and get veterans back into society in a functioning way.”

The clinics, part of the nonprofit Cohen Veterans Network, are intended primarily for those who have served in the military during the post-September 11 era, though they are open to all veterans. Cohen said he is putting them in areas of high need.

“There’s a large population of veterans who need mental health services,” said Terri Tanielian, a senior behavioral scientist at Santa Monica-based RAND Corporation. “This provides them with another option. … The clinics certainly add to our nation’s capacity.”

Franco, who lives in Huntington Park, Calif., said that he was able initially to find help through a local nonprofit, but he plans to visit the Cohen clinic in L.A. “very soon.”

In addition to Los Angeles, Cohen’s network also operates clinics in New York City, San Antonio, Philadelphia and Addison, Texas – a suburb of Dallas. They care for veterans regardless of how long they served or how they were discharged. The clinics also serve veterans’ family members. The outpatient centers treat a wide range of mental health disorders and help veterans make the transition back to civilian life. Cohen is also funding a nonprofit research organization, Cohens Veterans Bioscience, that will seek to develop tests and medications for PTSD and traumatic brain injuries.

Cohen is the CEO of Point72 Asset Management in Stamford, Connecticut, and formerly headed SAC Capital Advisors, which pleaded guilty in 2013 to insider trading charges. Cohen himself is temporarily barred from supervising funds that manage outside money – part of an agreement with the Securities and Exchange Commission. 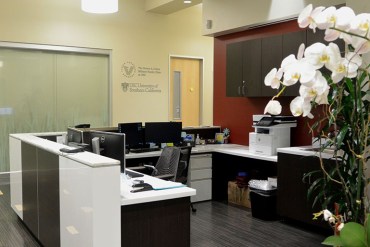 In addition to Los Angeles, Cohen’s network also operates clinics in four other cities around the U.S. They care for veterans regardless of how long they served or how they were discharged and also serve veterans’ family members. (Photo courtesy the University of Southern California)

“It’s not just lack of access,” Flynn said during the grand opening of the Los Angeles clinic last month. “In some cases, it’s exclusion.”

The VA estimated in 2014 that there were 2.6 million post-9/11 veterans.  They have high rates of depression, PTSD and other mental health problems.

One study by the VA found that about 30 percent of Iraq and Afghanistan veterans treated at Veterans Affairs hospitals and clinics had PTSD. Yet only about half of veterans with PTSD are receiving care for their condition, RAND’s Tanielian said. Barriers to care include a shortage of mental health providers and perceptions that seeking care is a sign of weakness or could hurt their career.

Some younger veterans prefer not to use VA facilities for health care, either because of location, concerns about confidentiality or a desire not to take services away from older veterans, Tanielian said.

And many veterans seek care outside the VA because they don’t qualify for the government-funded services, said Milo Peinemann, chief strategy officer at New Directions for Veterans, a Los Angeles nonprofit.

The fact the Cohen clinics don’t have strict eligibility rules will enable them to reach an entire population of veterans who are currently being underserved, Peinemann said.

Over the past decade, community organizations have expanded physical and mental health care access for veterans. The Warrior Care Network, for example, is trying to fill gaps in government care through a partnership with four academic medical centers across the U.S.

Angel Ewers, 41, her husband, and their teenage children are being treated at the Cohen clinic in San Antonio. Ewers said her husband, who served in the Army, Air Force and the National Guard, tried to commit suicide nearly three years ago. Since then, he has been in and out of psychiatric hospitals and seen numerous providers.

Not having to pay for care at the Cohen clinic is a “financial relief”, she said.

When possible, the clinics will bill insurance, said Anthony Hassan, president and CEO of the Cohen Veterans Network. But he noted that not all veterans and family members want their insurance companies to know they are seeking mental health treatment.

Providers across the network will strive to provide care that is based on proven best practices, said Ian Chuang, chief medical officer for Netsmart, a technology company that is tracking outcomes and supporting research at the Cohen clinics.

“The Cohen veteran clinics are trying to push the boundaries and say, ‘We need to do better,’” Chuang said. “We want to be part of figuring out what better means.”

The clinic plans to open satellite centers around Los Angeles County and to collaborate with existing providers.

Partnering with a university and having the flexibility of private funds makes the L.A. clinic uniquely qualified to provide the best scientific treatment as it evolves, said Marvin Southard, the clinic’s CEO and former mental health director for L.A. County. “And it’s constantly evolving,” he said.