This story is part of a reporting partnership that includes KCUR,

Free health clinics have long been places people turn to when they don’t have health insurance or money to pay for care. But the health law’s expansion of coverage puts free clinics in uncharted territory. 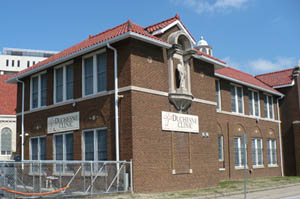 The Duchesne Clinic, a facility housed in an old parish school in Kansas City, Kansas, has decided to take Medicaid and private insurance if health coverage expands in the future – even though it will mean a major transformation of the clinic (Photo by Elana Gordon/KCUR).

While the law goes before the Supreme Court this week, health providers are already gearing up for a surge in patients with insurance in 2014.

Around the country, hundreds of free clinics have been established over the last 50 years to treat patients like Patsy Duarte.

“I have no insurance, I have no other means of going to a doctor – the last time my husband went to a doctor, it was like $85 just for the visit,” says Duarte, who cannot work due to her medical conditions and whose combined income with her husband is about $15,000 a year.  They are not on Medicaid, because only parents with minor children are eligible.

Duarte gets her blood pressure checked at Duchesne Clinic, a facility housed in an old parish school in Kansas City, Kansas. She’s been coming here for years to manage her hypertension, diabetes and other health issues. At a recent check, her blood pressure wasn’t good: 172 over 85. “That’s way too much,” she says.

The bad economy, the loss of jobs and health insurance, has meant more people like Duarte are turning to the clinic, according to director Amy Falk.

“We’ve been kind of caught in the perfect storm of you have so many people needing care that can’t get care, but at the same time, funding, you know, has been held level or in some cases decreased – so while you’d like to ramp up, this is not the economic time to do that,” Falk says.

While uninsured people can, and do, go to federally qualified community health centers and hospitals, free clinics are the only place where there’s no fear of a bill. There has always been an upside for the clinics to this arrangement: No bills means no billing systems and no heavy administrative costs.

But with the health law’s expansion of coverage, free clinics are at a crossroads: Should they stay outside the mainstream of the health system, remaining mostly dependent on donations and grants? Or should they start to accept Medicaid and other insurance?

The health law expands the reach of Medicaid beginning in 2014. That’s expected to add 16 million beneficiaries and some free clinics want to transform themselves to serve those newly covered people. But Nicole Lamoureaux Busby, head of the National Association of Free and Charitable Clinics, points out that over 20 million people still won’t have coverage. And, she says, many clinics will have a role helping patients figure out the new system.

“It sounds great to have everyone be eligible between 2014 and 2019, but there’s not this magic potion or wand that’s going to get people signed up,” Lamoureaux Busby says. “Somebody’s going to have to help them. We’re going to have to explain now a very complicated system that quite frankly ignored patients in the past.”

Duchesne free clinic director Amy Falk says the clinic’s already been responding to a changing health system by trying to be more of a primary care center for patients.  Falk says the clinic’s decided to take Medicaid and private insurance if health coverage expands in the future – even though it will mean a major transformation of the clinic.

“I don’t think we can stay as are. I think we have to grow within our environment,” Falk says. “It will totally change the culture and structure of this clinic, having never had to do these things and building the infrastructure one, to put in place, but just how we do our daily workflow. It will change.” 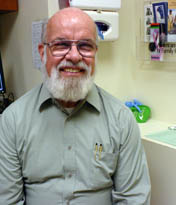 One way taking Medicaid and private insurance could alter the nature of free clinics is in relationships with volunteers like Dr. Glenn Hodges, of the Health Partnership Clinic, in nearby Johnson County.

“I’m a medical missionary three miles from where I live, taking care of people in my neighborhood,” Hodges says.

Hodges has been a happy volunteer at the Health Partnership Clinic since he retired from the VA more than 10 years ago. This clinic will be making some more sweeping changes by applying to be a federally qualified community health center. That will include taking Medicaid and private coverage and qualifying for more federal funds.

The white-bearded Hodges – who is also a master rose gardener – says he plans to stay with the clinic. But he and most other volunteers will focus on patients who don’t have coverage. Staff will focus on those with coverage.

“The patients who are receiving free care are going to continue to be there. It’s two separate patient populations,” says Hodges. “We’ll require two separate administrative organizational structures. There’s a need for both.” 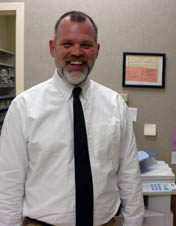 “I exist to help my patients get healthier and to take care of as many as I can in highest quality manner possible,” says Wesco. “How do I create a system where I can bill for services? Well, you know I just do it, just like I created a system to manage 100 volunteers. That to me is a lot harder than billing Medicaid.”

Still, Wesco knows this transition takes effort: planning, training staff, and adding an electronic medical records system. For clinics that go in this direction there can be bigger changes, too. Some will have to add or increase their malpractice coverage and some may need to take a role in changing state Medicaid laws.

“The bottom line is we have a growing need,” says Wesco. “And our job is to worry about all those people we don’t take care of and get resources to make sure no one goes without health care. That’s a big job and the only way I can do that adequately is to bring more resources into this organization.”

Free clinic directors say the next few years will be hard work, but they say with decades of stretching resources and caring for people with complex health problems, they’ll rise to the challenge.

Free Health Clinics At A Crossroads