Blue Cross and Blue Shield of Georgia faces separate lawsuits accusing it of sending reimbursement money for emergency room care directly to patients — and not to the hospital because it isn’t part of the insurer’s network.

That’s costing the hospitals money since patients don’t always turn over the funds, according to the lawsuits, filed by Polk Medical Center in northwest Georgia and Martin Luther King, Jr. Community Hospital in Los Angeles — 2,000 miles apart. Each suit also says some patients have sought to profit from receiving the direct payments for their ER care.

By sending money directly to patients, Polk Medical Center says the insurer forces the hospital to find ways to collect it. Even though patients are obligated to pay the facility the amount sent to them by Blue Cross, in some cases they have spent the money, according to the lawsuit.

The Polk lawsuit said that Blue Cross, in its new payment process, was pursuing “retaliation’’ for the Cedartown, Ga., hospital’s not agreeing to “unreasonable and unfair” terms in order to be part of the insurer’s network. Hospital officials said the payment shift has hurt the hospital financially.

“Blue Cross insures a significant number of individuals in Polk County,’’ said Tommy Manning, the attorney for the Floyd Medical Center system, of which Polk Medical Center is a part.

And he said he was unaware of the Los Angeles lawsuit prior to the filing of the Polk complaint.

The lawsuit from Martin Luther King, Jr. Community Hospital alleges that “most of the MLK patients who receive checks from [Blue Cross of Georgia] are unaccustomed to receiving payments in such large amounts. Some of these patients do not know that they are required to endorse those checks over to MLK. Other patients know that they should endorse those checks over to MLK but instead use such funds to pay for their personal expenses. When MLK attempts to collect the amounts from these patients, the money is often spent.” 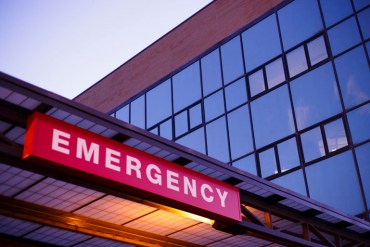 In the case of patient “B.G.,’’ the suit alleges that the patient went to the MLK emergency room 11 times between Oct. 19 and March 27 for various ailments, including complaints of chest or back pain. Blue Cross of Georgia paid the patient a total of more than $70,000 for these visits to MLK, according to the lawsuit.

The lawsuit said the practice overall has caused MLK to suffer damages in excess of $350,000.

Patients are protected under federal law when seeking care in hospital emergency rooms. Under the Emergency Medical Treatment and Labor Act (EMTALA), they must at least be stabilized and treated, regardless of their insurance status or ability to pay.

Manning said this month that he’s not aware of any other insurer in Georgia paying the patient instead of the hospital.

At least one other major hospital that is not part of the suits has reported difficulty in getting payments from Blue Cross when it was out of the insurer’s network. Officials at Grady Memorial Hospital in Atlanta said that when it was out of Blue Cross’ network for the four months ending in March 2015, the insurer sent reimbursement payments to some patients and not to Grady.

“This is not unique to MLK,’’ said Tooch. “This happens to all out-of-network providers for Blue Cross of Georgia.”

Going after the patients for payment instead of the health plan simply hasn’t worked, attorneys for MLK said. The patients “are typically unable or unwilling to pay MLK for the medical services received,” according to the suit.

Manning agreed. “We will continue to pursue collection with patients, but filing numerous lawsuits would not be fruitful, particularly given that Blue Cross Blue Shield is the party ultimately at fault,” he said.

Asked about the Blue Cross of Georgia payment strategy, the national Blue Cross Blue Shield Association, through a spokesman, declined comment. Clare Krusing, a spokeswoman for America’s Health Insurance Plans, a trade group, said that those types of reimbursement arrangements would vary by plan and by contract. She added that she did not have details on other plans that may do the same.

Paying patients directly is an insurer tool used more commonly in the West, “particularly when non-network facilities are unwilling to negotiate reimbursement related to out-of-network service,’’ said Janet Guptill of the Tatum firm, which provides interim chief financial officers and other executives to health care organizations.

“The insurer takes the position that the provider claim is a private pay issue between the provider and the patient, so the facility has the responsibility to collect the payment from the patient,’’ Guptill said.

Guptill said that when a hospital isn’t in network, its charges for ER and other care tend to be higher than the charges from facilities in the insurer’s network.

For insurers, paying patients directly is “a clever and probably effective tactic,’’ said Chris Kane, a consultant with DHG Healthcare. The hospital, he said, may already be dealing with other collection challenges, including those involving high-deductible health plans.

A hospital attempting to collect the money may end up alienating the patient and thereby discouraging future visits, Kane said.

And patients pocketing the money is another problem, he added. “It’s more troubling if a patient views this as a source of cash.’’

This story was done in partnership with Georgia Health News.