The debt ceiling debate this month has sent claims and counter claims flying, keeping the nation’s fact checkers busy.  Here’s a sampling of their mid-summer efforts:

FactChecker.org
was very curious about a number of claims by the conservative group Crossroads GPS, which is running a $7 million ad campaign aimed a number of Democrats, including the president (The “GPS” stands for Grassroots Policy Strategies, by the way).

One of the ads features a sleepless woman saying that the “instead of fixing healthcare, my mom’s Medicare will be cut.” FactCheck found that “the implication that the health care law takes away Medicare benefits is misleading. Extra benefits under Medicare Advantage plans are likely to be reduced, but the law actually expands traditional Medicare benefits, such as adding more prescription drug coverage.”

FactCheck goes on to say: “Even if viewers read nothing more into the claim than that, they should know that the law cuts the future growth of spending in Medicare over a decade, not the current budget. About 40 percent of those cuts come from reducing the future growth of payments to hospitals, and skilled nursing and home health organizations. ” 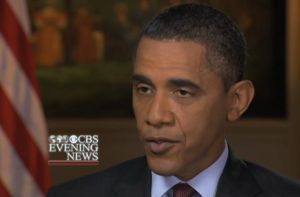 Politifact
wondered about a particular claim during a July 12 interview CBS’ Scott Pelley had with President Barack Obama:

Pelley: “Can you tell the folks at home that, no matter what happens, the Social Security checks are going to go out on August the 3rd? …

Obama: “Well, this is not just a matter of Social Security checks. These are veterans’ checks, these are folks on disability and their checks. There are about 70 million checks that go out each month.”

Politifact checked with the Bipartisan Policy Center and writes that, if the government could “prioritize,” it could “pay the monthly costs of Medicare and Medicaid ($50 billion), Social Security ($49.2 billion), Pentagon vendors ($31.7 billion), interest on the debt ($29 billion), and unemployment benefits ($12.8 billion). Those categories total $172.7 billion. But doing so would mean delaying other payments — for instance … salaries and benefits for federal employees ($14.2 billion), welfare and food programs ($9.3 billion), health and human services grants ($8.1 billion), housing assistance ($6.7 billion), and many other programs, including military active duty pay ($2.9 billion), veterans affairs program ($2.9 billion) … ”

Politifact ended up rating the president’s statement “Half True.”

The
New York Times
got an answer from the White House about a question raised in “A Singular Woman: The Untold Story of Barack Obama’s Mother.”  Author Janny Scott dug deep into a claim that the president made on the campaign trail about his mother:

For my mother to die of cancer at the age of 53 and have to spend the last months of her life in the hospital room arguing with insurance companies because they’re saying that this may be a pre-existing condition and they don’t have to pay her treatment, there’s something fundamentally wrong about that.

The Times notes that Scott questioned this account, quoting “from correspondence from the president’s mother to assert that the 1995 dispute concerned a Cigna disability insurance policy and that her actual health insurer had apparently reimbursed most of her medical expenses without argument.”

According to the Times, a White House spokesman “chose not to dispute either Ms. Scott’s account or Mr. Obama’s memory … ‘We have not reviewed the letters or other material on which the author bases her account,’ said Nicholas Papas, the spokesman. ‘The president has told this story based on his recollection of events that took place more than 15 years ago.'”

FactCheck.org also looked into presidential candidate Rep. Michele Bachmann’s claims on two Sunday talk shows that the “nonpartisan Congressional Budget Office said the federal health care law will ‘cost the economy 800,000 jobs.'” The service was blunt and to-the-point on this one: “The CBO didn’t say that. Instead, the CBO said that the law would cause a reduction in the amount of labor workers choose to supply. Some Americans would decide to work fewer hours or retire earlier because their ability to get health insurance would be more secure. … Overall, the CBO said the impact on jobs would be ‘small.'”

While the “death panels” thing has been around for quite some time, this time, Kessler is referring to a claim from Georgia Republican Rep. Phil Gingrey: “[U]nder this IPAB [Independent Payment Advisory Board] we described that the Democrats put in ‘Obamacare,’ where a bunch of bureaucrats decide whether you get care, such as continuing on dialysis or cancer chemotherapy, I guarantee you when you withdraw that the patient is going to die. It’s rationing.”

Kessler’s researched response? “ We can certainly understand that Gingrey may have philosophical concerns over the IPAB, but that does not excuse his leap of logic that it will lead to the deaths of seniors. Even with the potentially vague language on rationing in the law, the board members would need to be confirmed by the Senate, and Congress would have the opportunity to reject the recommendations.” and he then goes on to give Gingrey’s statement:

Separately, Kessler found plenty of examples of misuse of a Medicaid statistic, including:

“Cash-strapped states are also feeling the burden of the Medicaid entitlement. The program consumes nearly 22 percent of states’ budgets today, and things are about to get a whole lot worse.”

“Across the country, governors are concerned about the burgeoning cost of Medicaid, which in fiscal 2010 consumed nearly 22 percent of state budgets, according the National Association of State Budget Officers. That’s larger than what states spent on K-12 public schools.”

Kessler found fault with the “assertion that Medicaid is 22 percent of state spending, and thus now exceeds education spending.” While it comes from an annual survey of the National Association of State Budget Officers, he notes that “if you dig into the report — if you just go to page one — you will see that this number includes the federal contribution, in what is known as ‘total funds.’  …   [The NASBO report says]  ‘For estimated fiscal 2010, components of general fund spending are elementary and secondary education, 35.7 percent; Medicaid, 15.4 percent; higher education … ‘  In other words, without the federal dollars included, Medicaid falls to second place, far behind education. It turns out that on average, states spend 15.4 percent of their funds on Medicaid — not 22 percent.”

No Pinocchio ratings this time: Kessler rates this “True but False.”