ORLANDO, Fla. — Imagine going to the doctor and finding out before you leave the exam room how much your prescribed drug will cost, avoiding sticker shock at the pharmacy.

Or what if you could wear a tiny device at the top of your back that would gently nudge you to sit up straight whenever you slump.

How about not having to sign by hand a raft of hospital registration papers — instead, doing it all online — and using a laptop computer during your stay for health education purposes?

Innovations like these geared to help consumers were on display here this week at the nation’s largest health technology conference, the Healthcare Information and Management Systems Society meeting — popularly known at HIMSS. More than 40,000 health industry professionals gathered at the Orange County Convention Center, one of only a few in the country large enough to handle the conference.

How big was the meeting?

Attendees could use a 10-minute bus ride to get from one side of the mile-long center to the other. Just touring the exhibit hall was a full-day affair — not counting sitting in on the dozens of educational sessions meant to spur transactions among health businesses.

The exhibit hall had more than 1,300 companies showcasing their latest and greatest products. Traditional technology stalwarts such as IBM and Hewlett Packard Enterprise were on hand, but so were Uber and Lyft. Microsoft, Google and Amazon were selling services amid start-ups, too. Countries — such as Israel — had their own spaces.

Most of the technology on display was geared for the insurers, hospitals and doctors who command more than $3 trillion in annual U.S. health spending.

Terms like artificial intelligence, machine learning and predictive analytics ruled the day here as much as the stuffed animals, candy and other knickknacks attracting visitors. Who knew there were Chrome- and Google-themed socks?

But if you looked closer you could see new devices and systems geared toward changing the consumer experience — whether in the home, doctor’s office or hospital.

“Alexa, I’ve burned my hand what should I do?” asked an exhibitor from the Intelligent Health Association into the Amazon-owned device. “Is it a major burn or minor burn?” Alexa replied, then cited tips on how to treat the hand, such as running the wound under cold water.

A tabletop robot called Pillo showed how consumers could connect to a health coach via video conferencing, submit their latest blood pressure readings electronically to their doctors and dispense that day’s medications.

Around the corner, Surescripts, out of Arlington, Va., was showing how its technology allowed doctors to tap into a patient’s health insurance information to see what the copay would be for medication — and discover if a less expensive alternative existed. Tens of thousands of doctors already make use of the feature, although that represents barely 10 percent of all providers, a Surescripts representative said.

Google had an extensive exhibit showing it could offer a variety of its products, ranging from an indoor map that would help patients navigate through massive medical centers to an online registration tool using Google Cloud that would speed the sign-in process at hospitals. The hospital could then offer a Google Chromebook to provide medical education and other entertainment during a patient’s stay. 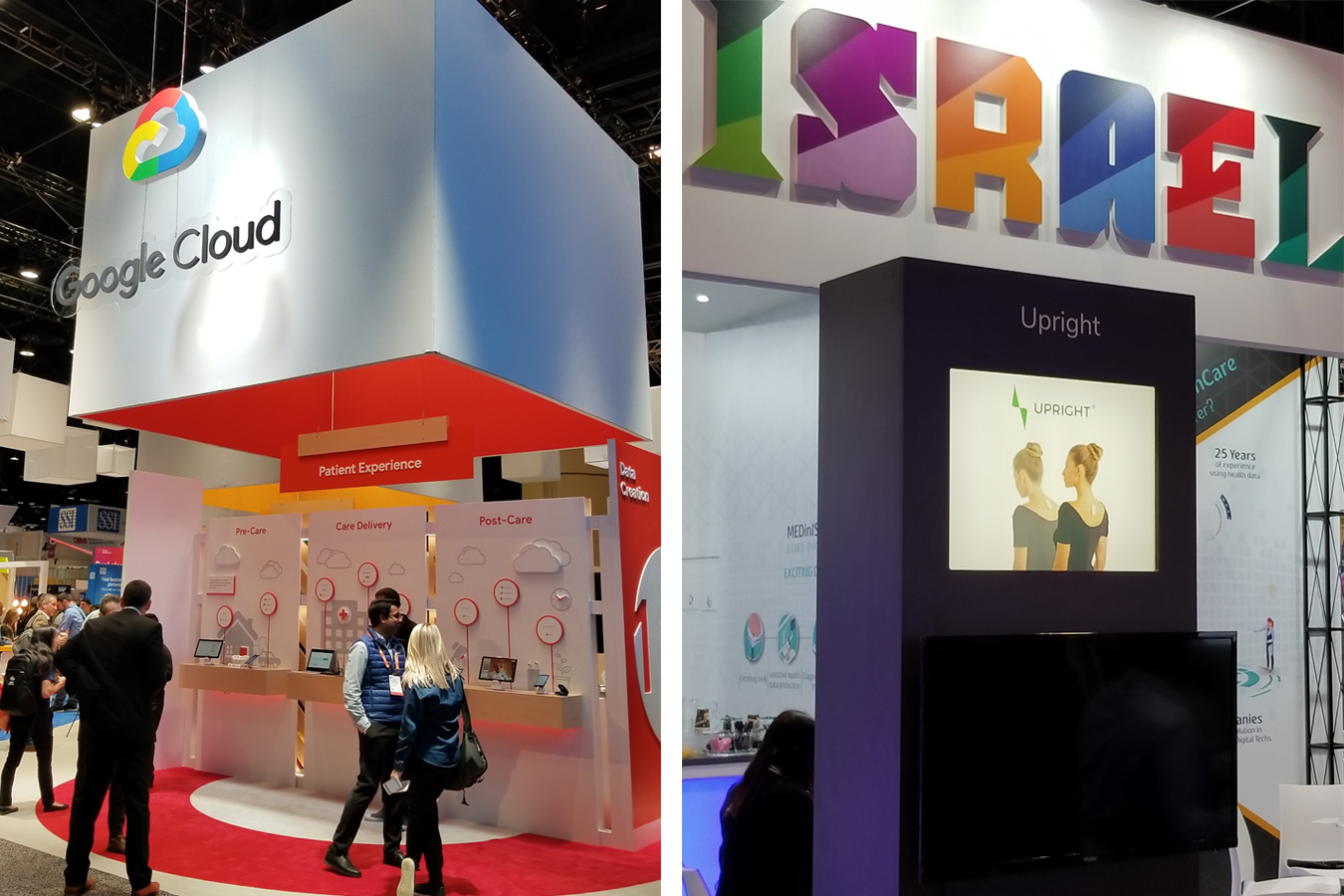 One of the products promoted by Google was an online registration tool to speed the sign-in process at hospitals. Upright, an Israeli company, displayed a 2-inch posture trainer that attaches to users’ backs and gently vibrates when they slouch.(Phil Galewitz/KHN)

One feature being offered by Microsoft would appeal to anyone whose doctor spends more time typing notes into a computer during patients’ visits than listening to their problems. The company was showcasing a new speech-to-text program that could convert the entire patient visit into easily readable medical notes. “This has [the] power to save doctors hours of work — each day,” a Microsoft engineer said.

Nearby, Upright Inc. was one of 20 start-up companies at the Israel booth. For $80, it was selling a 2-inch sensor that people could put on their backs, and it would gently vibrate when the user assumed poor posture. An app can provide daily data on posture — call that the slouch rate?

As happy hours kicked into gear in the exhibit hall — free mimosas, wine and beer to go along with all the free coffee, fruit slushies and cookies — I thought it would be great if only I had the indoor Google app to find my way out of the convention center to my car.

One consumer health benefit from the conference already kicked in. My Fitbit showed I had walked nearly 15,000 steps.