If the Supreme Court strikes down all or part of the health law, Republicans are poised to rub it in – through the November election – then roll out their own, smaller proposals. 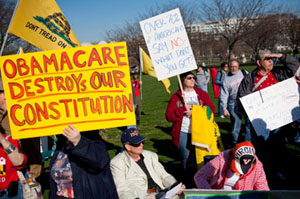 Public opinion continues to be split over the law, and Republicans have found that their “repeal Obamacare” message goes a long way with disgruntled conservatives and some swing voters.

Republicans would have to win the White House and gain full control of Congress to be able to move forward with their health care agenda. Pollsters don’t see either party achieving that kind of supermajority, so there’d have to be compromise – unlikely on this issue.

Mitt Romney, the presumptive GOP presidential nominee, has promised to swiftly finish the job if the court falls short of a full repeal. On his first day in office, he says, he would grant each state a waiver allowing it to ignore the law.

Beyond that, Romney said in a June 12 campaign speech, he would pursue an alternate course for changing the health care system. But Romney’s ideas were on a smaller scale, and mostly conceptual, reflecting the party’s wariness of backing big replacement measures that could draw fire during the general election.

Romney said that he would encourage people to buy insurance by extending to everyone the same tax advantages that are now available only for the purchase of employer-sponsored health coverage.

He also promised to keep insurers from denying coverage to people with preexisting medical conditions, but only for those with a continuous history of coverage. The health law, by comparison, requires insurers to take everyone, regardless of preexisting conditions and insurance history, beginning in 2014. It also limits how much more health plans can charge sicker people than healthy ones.

Next year, Boehner expects Republicans to pursue “commonsense, step-by-step reforms that protect Americans’ access to the care they need, from the doctor they choose, at a lower cost.”

The short list of Republican alternatives isn’t new, and includes:

Despite party convergence around these general ideas, Romney will need to rally Republicans around detailed proposals, and that won’t be easy, says David Merritt, a health care consultant. “There are lots of different versions of tort reform,” he said. “Getting everyone on the same page is important, and that’s a role for Gov. Romney.”

Merritt is a consultant at Leavitt Partners, a firm run by Michael Leavitt, who was Health and Human Services secretary under President George W. Bush and who has been appointed to lead the transition team of a possible Romney administration.

Republicans also are split over how to handle popular provisions of the health law that have already kicked in. Some conservatives say the party should strictly avoid all provisions in the law, because it represents everything that is wrong with President Obama and Democrats’ approach to governing.

Others say it makes sense to keep intact provisions that are popular with the public – and they don’t want to take the blame for getting rid of them. For example, if the law disappears, so will provisions that already allow adult children to stay on their parents’ policies until the age of 26, end lifetime limits on coverage, and provide prescription drug discounts to seniors when they are in the so-called doughnut hole, or coverage gap.

Merritt cautioned that health care won’t be the only national priority come January, no matter who occupies the White House. The economy, jobs and taxes will still need attention, he said. “There will be a laundry list of things to do, and where would health care fall on that list? Even the president, if he is reelected and there’s no health reform, would he take another bite at the apple?”