Sen. Charles Grassley, a longtime member of the Senate Finance Committee and frequent critic of nonprofit hospitals, wants to know whose idea it was to pay hospital CEOs annual bonuses surpassing a million dollars in some cases. 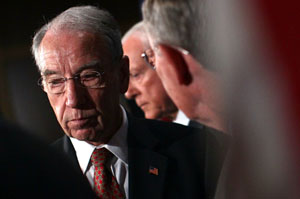 Sen. Grassley finishes speaking during a press conference at the U.S. Capitol in 2011 (Photo by Win McNamee/Getty Images).

The Iowa Republican was responding to a report by Kaiser Health News and ABC News that showed CEOs reaping bonuses for profit, revenue and other financial goals even as policymakers talk about the need to promote efficiency instead of volume. The stories found that boards of nonprofit hospitals are rewarding bosses more for raising prices and increasing the number of procedures than for rigorous quality and cost-cutting goals.

In examining 30 of the biggest public and private nonprofit health systems in the country, KHN listed nine CEOs whose bonuses were at least seven figures.

Grassley has long chided trustees of nonprofit hospitals for what he sees as lax oversight of executive compensation and insufficient community contributions in return for the organizations’ exemption from taxes. Apropos of his question about how boards decide to pay bonuses, hospitals told KHN that they follow a careful process to set the optimal level and design of CEO pay.

“The Internal Revenue Service has a very specific set of steps that a hospital board has to follow in setting an executive’s compensation,” said Richard Umbdenstock, CEO of the American Hospital Association. Those include “having an independent board of directors, so nobody’s setting their own compensation, to comparing it to the market” for other CEOs, “to proper documentation and disclosure on a federal form annually,” he said.

But Grassley thinks such steps, which give nonprofits a legal “safe harbor” from IRS scrutiny, aren’t sufficient. Escalating nonprofit pay suggests that the safe-harbor recipe has failed, Grassley has said, and he has tried unsuccessfully to have it removed as a protection for nonprofit board members.

“In the meantime I’m trying to embarrass them into doing their jobs,” he said.

Bonuses may not be justified even to motivate hospital CEOs toward goals consistent with a nonprofit hospital’s mission, such as promoting charitable care, Grassley said.

“If they’re at a nonprofit hospital, they’re supposed to do that as part of their job,” he said. “They aren’t doing their job if they’re not doing the charity care.”