At Group Health, a nonprofit health system in Washington state, doctors and researchers are collaborating to make sure the latest health care innovations don’t just sit on the shelf. 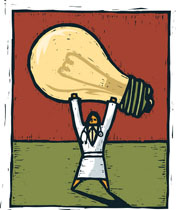 They’ve adopted a strategy known as a “learning health system,” which creates a feedback loop of sorts between the system’s medical and research sides, including the Group Health Research Institute.  In broad terms, researchers help doctors evaluate new ways of providing care, and doctors suggest areas where research is needed — meaning evidence and practice exist in a cycle.

In a new paper for the Annals of Internal Medicine, officials at Group Health describe the idea of the learning health system and how it’s making a difference there.

Eric Larson, a co-author of the paper, said that health care innovations traditionally take years to make their way into doctors’ offices. That delay means new ideas aren’t being tested quickly to weed out those that don’t work, and patients aren’t rapidly getting the benefit of those that do.

“That wait is just lost gain for patients and for public health,” said Larson, vice president for research at Group Health and executive director at the Group Health Research Institute.

One important piece of the learning health system at Group Health is the Partnership for Innovation. Under that program, clinicians propose ideas for delivery system reform, and researchers help shape selected ideas into workable projects that can be evaluated.

The learning health system model has played a key role in various Group Health initiatives, including its move to patient-centered medical homes, an opioid-prescribing safety initiative and evaluating high-end imaging use.

Matt Handley, the medical director for quality and informatics at Group Health, said the model means implementation of new ideas and research on them can happen simultaneously, and makes it easier for doctors to evaluate changes in how they deliver care. That doesn’t always happen when health systems around the country try new things.

“Because their intention is good, they assume the outcomes are good,” he said. “And that’s not always the case.”

Group Health long has embedded research into its system, but a turning point in the system’s embrace of the learning health system concept came in 2007 when Group Health decided to try a new way of providing primary care through patient-centered medical homes.

Rather than clinicians implementing the program and researchers studying the results, the two groups worked together from the onset. Researchers shared the latest findings on primary care with clinicians and evaluated the medical homes as they were developed on a pilot basis. By 2009, the model had spread to all 25 Group Health medical centers because of positive findings by the researchers.

Sarah Greene, director of strategy and business development at Group Health and the lead author of the paper, said that two key components of a learning health system are having people in place who span the research-clinical divide and can help information flow between the two sides, and having a culture that is intensely curious and values improvement.

“It requires a degree of vulnerability to say we want to learn more,” she said.