MOUNTAIN VIEW, Calif. — When Dr. Sarah Azad followed her mother into the field of obstetrics eight years ago, she thought she’d be in private practice for the rest of her career. At the time, independent practices abounded in Silicon Valley.

“From the time we were young, my mom’s patients loved her. She was a part of their lives. That’s just always how I’ve seen medical care,” she said.

But over the past decade, she’s watched as doctor after doctor sold their practice and went to work for one of the large hospital systems in town. Today, Azad runs one of the last remaining independent OB-GYN practices in Mountain View.

The number of physician practices employed by hospitals increased by 86 percent from 2012 to 2015, according to a study conducted by Avalere Health for the Physicians Advocacy Institute, a health policy-focused nonprofit.

Perhaps nowhere has the trend been more pronounced than in Northern California.

As large hospital systems like Sutter Health, Stanford Medicine and UCSF Medical Center gobble up doctor practices, they gain market muscle that pushes costs upward. It’s a key reason why Northern California is now the most expensive place in the country to have a baby.

A study published this week in Health Affairs found that large doctor practices, many owned by hospitals, exceed federal guidelines for market concentration in more than a fifth of the areas studied. But the mergers are typically far too small for federal antitrust authorities to notice.

“When you have less competition, prices go up,” said Martin Gaynor, a health care economist at Carnegie Mellon University. “If you’re an insurance company and you don’t reach an agreement with Sutter, then you have a hard time offering an attractive insurance product because it’s so big and pervasive. So you don’t have the same negotiating power, and Sutter can extract higher prices.”

In the San Francisco Bay Area, the reimbursement rate for a vaginal delivery is two to four times higher for physicians who work for large hospital systems than for those who are independent, according to a Kaiser Health News analysis. The news organization examined claims data provided by Amino, a health cost transparency company, plus results from medical cost calculators available from certain employers to help workers comparison shop.

The extra money for physician services goes to the hospital system, and doctors, now on salary, might take home no more than before. Although switching from independent practice spares OB-GYNs the considerable hassles of negotiating with insurers and running an office, doctors say the lion’s share of the benefit goes to hospital systems — not to physicians or patients.

In Northern California, Sutter, Stanford and UCSF all mentioned quality as a reason why their physician prices are higher, and it might seem intuitive that integrating care among disparate physicians leads to better care.

But in general, research suggests bigger is not necessarily better.

Fewer patients of small physician-owned practices, for example, are admitted to the hospital for preventable conditions than those of large hospital-owned practices, according to a 2014 study published in Health Affairs. A report from the National Academy of Social Insurance showed that the integrated delivery networks of large hospital systems have raised physician costs without evidence of higher quality. And a recent paper, also published in Health Affairs, found that high-price physician practices, which cost at least 36 percent above average, had no better quality than low-cost practices.

“All of the evidence that we see shows that the quality in these larger systems is the same or worse,” said Kristof Stremikis, associate director for policy at the Pacific Business Group on Health, which represents employers that provide health insurance.

On a sunny day this spring, Azad walked into her patient’s room wearing a colorful headscarf. Just weeks from her due date, Ruby Lin sat on the end of the exam table holding her belly. The two women greeted each other like old friends.

“Thanks — I’m not where I hoped I’d be,” Azad replied, rolling her eyes and touching her stomach. The doctor gave birth to her fourth child just months earlier and hadn’t lost the “baby weight” she wanted to yet. 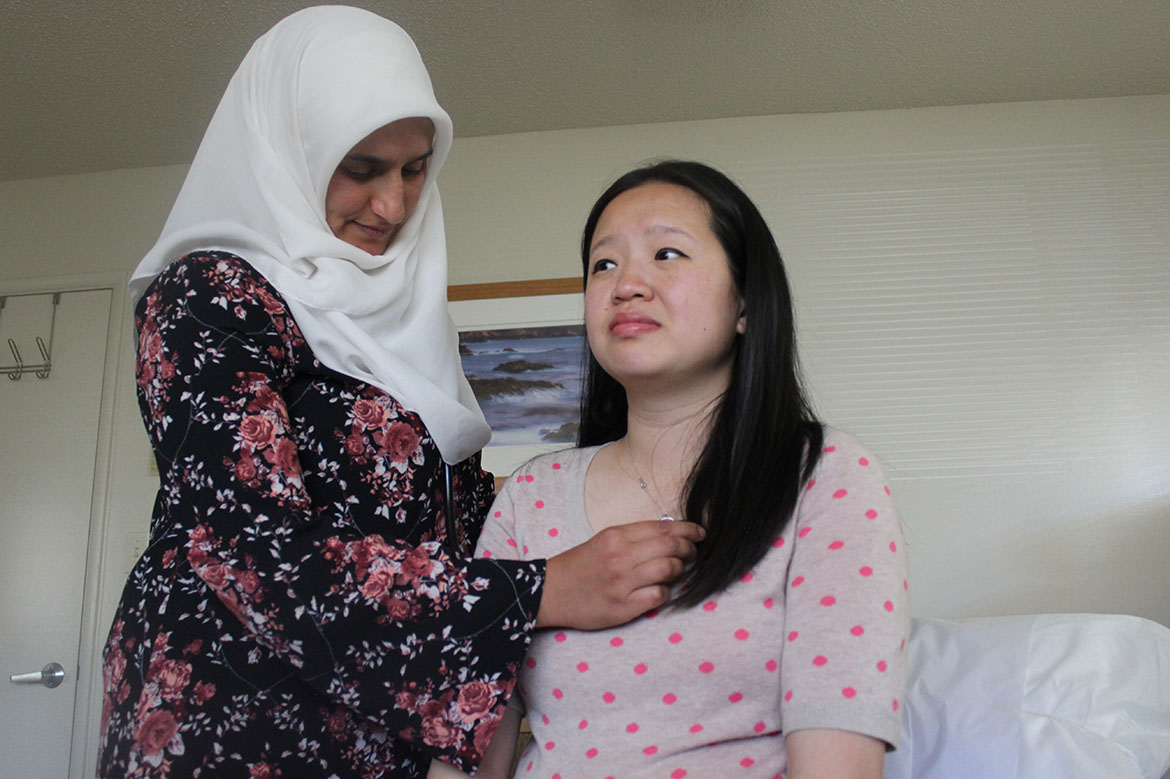 This was Lin’s second baby with Azad as her doctor. “I get very nervous about seeing doctors and especially OB-GYNs, and Dr. Azad is the only one I’m comfortable with,” said Lin.

This sort of well-established, personal relationship is Azad’s favorite part of being a doctor, and she considers it a hallmark of independent practice. At the larger practices owned by hospital systems, she said, patients may be more likely to have the doctor on call deliver their baby rather than the obstetrician whom they’ve grown to know over months.

But Azad says running a medical practice in one of the most expensive parts of the country is getting harder. “Rent goes up 3 percent per year. Water and utilities went up 18 percent last year alone. But seven years later, [the insurers] are still paying me the same amount, despite any efforts to negotiate.”

At first, Azad tried reaching out to the insurance companies directly to ask for higher rates. They refused even to meet with her, she said. Then she hired a consultant to negotiate on her behalf. Nothing worked.

“One insurance contract responded saying, ’You don’t even have 2 percent of market share. Basically drop our contract or not — it doesn’t affect us,’” she said. Another insurer told her they couldn’t raise her rates because they had to pay too much to the larger health systems in town, she said.

Independent doctors in the Bay Area are reimbursed, on average, a median $2,408.45 for a routine vaginal delivery, which includes prenatal and postnatal visits, according to the Kaiser Health News analysis of Amino claims data.

That compares with $5,238.13 for the same bundle of services for Stanford physicians and $8,049.84 for doctors employed by University of California-San Francisco.

Health data company Amino provided KHN with median billing amounts for Bay Area obstetricians. KHN used a Medicare provider database to determine where each doctor worked. In cases where the doctor’s employment status was unclear, a reporter retrieved the information by calling the health system or physician directly. KHN then calculated the average median billing amount for a routine vaginal birth for each health system.

The Amino database did not contain many claims from doctors employed by Sutter, so KHN also reviewed OB-GYN charges on several insurers’ online cost estimators. The review found that obstetricians employed by Sutter Health are reimbursed about three times more for the same service than independent doctors, or about $6,452 for a vaginal delivery.

Many doctors are mystified as to why prices vary so dramatically — independent or not.

After nearly a quarter-century in independent practice, OB-GYN Ken Weber sold his practice to Stanford, where he now works. His office is in the same place, across the street from Azad. Both physicians admit patients to the same local hospital.

But insurers now pay about twice as much for his services as before.

He still makes the same amount, he said. Stanford’s health system gets the rest.

“It doesn’t make sense to me from the insurance company’s standpoint, because they’re losing all these doctors to the bigger groups and having to pay more. And if they just had negotiated with us fairly, I think we could come to some middle ground,” Weber said.

Weber said he hung on to his independent practice as long as possible, but he grew increasingly frustrated. “It’s hard to know that you’re doing the same work someone else does at Sutter or Stanford or wherever,” yet insurers are paying more for patients to see the other person, he said.

Nonetheless, there have been some real benefits to selling his practice, he added: He no longer has to worry about dealing with billing or maintaining compliance with the new electronic health record regulations.

For their part, the big Bay Area hospital systems caution against oversimplifying the many factors that go into paying for obstetrical care. A Stanford spokeswoman, Samantha Dorman, said the health system incurred significant costs when it integrated new provider groups. For instance, many were not yet on electronic health records and needed updated equipment. Dorman added that Stanford reduced physician charges a few years ago to be more in line with other practices.

A UCSF spokeswoman said that just looking at physician reimbursement rates was misleading because while the system charges more for physician services, it charges less for other hospital services. Overall, she said, their costs are competitive.

For its part, Sutter suggested it was not accurate or fair to judge physician price discrepancies on online cost calculators. According to Burnich of its Medical and Market Networks service, the rates provided are inconsistent and often out-of-date.

The agreements between hospitals and insurers have “gag clauses” barring either party from divulging rates. The bottom line, for many patients, is that it’s almost impossible to determine either the cost or the value of the various health care providers available to them. This is particularly problematic for patients with high-deductible plans, who may be on the hook for a significant portion of those costs.

Meanwhile, the type of consolidation that Azad has witnessed in Northern California is spreading quickly throughout the country, and it is extremely difficult to reverse.

The most consolidated places like Northern California, Pittsburgh and Boston have become a “poster child of what not to do,” said economist Gaynor of Carnegie Mellon. “We should look at places that have consolidated and think about how to avoid that.”

Guess Who Pays The Price When Hospital Giants Hire Your Private Practitioner?