When Lisa Tamura goes to the grocery store, she usually picks up a few frozen pizzas for the nights she doesn’t want to cook.

But on a recent Thursday afternoon at the Ralphs supermarket in Laguna Hills, California, she strolled right by the frozen food and headed straight to the fruits and vegetables.

That’s because she had some help from the ultimate personal shopper – a family doctor named Phil Cecchini.

Cecchini, who works for St. Joseph Hoag Health in Orange County, spent the afternoon advising shoppers on what foods to buy – and what to avoid.

“If you stick with the periphery, you are probably doing okay,” Cecchini told Tamura, who recently moved from Hawaii to California. “You are avoiding all the pre-packaged, processed foods.”

Hospitals and health clinics around the country are increasing their efforts to promote exercise and healthy eating. They’re offering yoga and cooking classes, sponsoring farmers’ markets and writing prescriptions for fresh fruits and vegetables.

One hospital in Connecticut opened a primary care clinic in a Stop & Shop supermarket and another in Michigan opened a demonstration kitchen. In California and Virginia, hospitals have partnered with schools to teach children about nutrition and exercise.

Such programs attract new patients and build loyalty, but many nonprofit hospitals are also driven by a federal mandate to improve health outcomes in the communities they serve. In addition, some hospitals are working under new payment models as a result of the Affordable Care Act in which they are compensated and held accountable for results more than ever before. That has led to more integration with primary care clinics, as well as more projects and campaigns to help reduce chronic diseases such as obesity and diabetes. 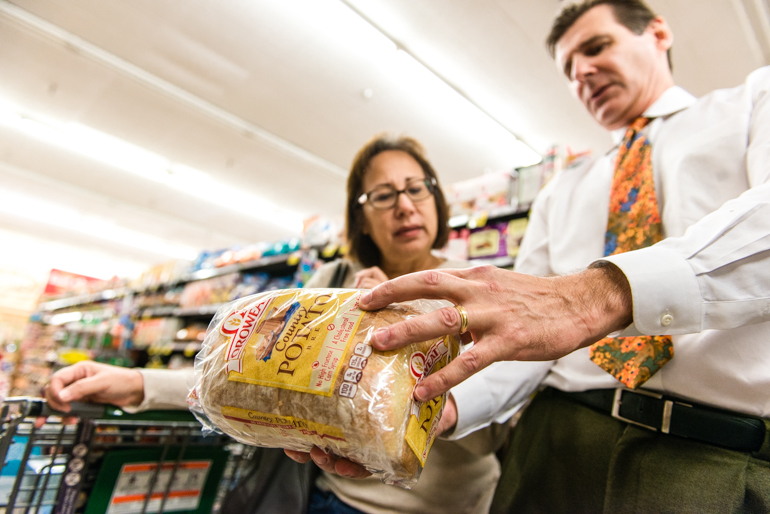 Cecchini and Tamura look over the nutrition facts of a loaf of bread. Hospitals and health clinics around the country are increasing their efforts to promote exercise and healthy eating. (Heidi de Marco/KHN)

Nearly 37 percent of Americans were obese between 2011 and 2014, according to a recent report by the U.S. Centers for Disease Control and Prevention. Even in affluent Orange County, California, where obesity levels are lower, Cecchini said patients don’t always know what foods cause weight gain or raise their blood sugar.

“People tend to know a lot more about nutrition, but there are still a lot of misconceptions out there,” he said. “There is a lot of room for improvement.”

St. Joseph Hoag Health’s recent campaign is called “Shop with Your Doc” and is based at Ralphs supermarkets throughout Orange County.

Grocery stores are an ideal place to teach people that they can become healthier by making small dietary changes and eating in moderation, said Vanessa Rosales, community affairs manager for Ralphs & Food 4 Less.

“What better place to reach the public with that message,” Rosales said.

She also said that the doctor and dietician help ease confusion for shoppers as they try to make healthy choices. “It can be pretty intimidating to someone who may not know how to read those labels,” Rosales said.

The shoppers didn’t have to be St. Joseph’s patients to get guidance from physicians as they fill up their shopping carts. Cecchini and a hospital nutritionist stood next to the pharmacy behind a table answering questions. One woman said she wanted to sweeten her tea and coffee and asked about the best substitute for sugar. A man said he was a vegetarian and took medication daily but that his cholesterol was still too high.

“Sounds like you are doing everything right,” Cecchini told him. “Just don’t give up the exercise.”

Shoppers also received a free bag with measuring cups and a card with tips for navigating the grocery store: Choose foods with more fiber and less sugar. Use fish as a main ingredient instead of meat. Aim for a rainbow of colorful fruits and vegetables.

As Tamura and Cecchini pushed her cart through the store, she grabbed a few fruits, including apples and pears. Then they stopped in front of the bread aisle. She picked up a loaf of country potato bread and they looked at the label together. Tamura said she didn’t realize that the bread had so much sodium. And that’s before you add salted butter and garlic, he said. 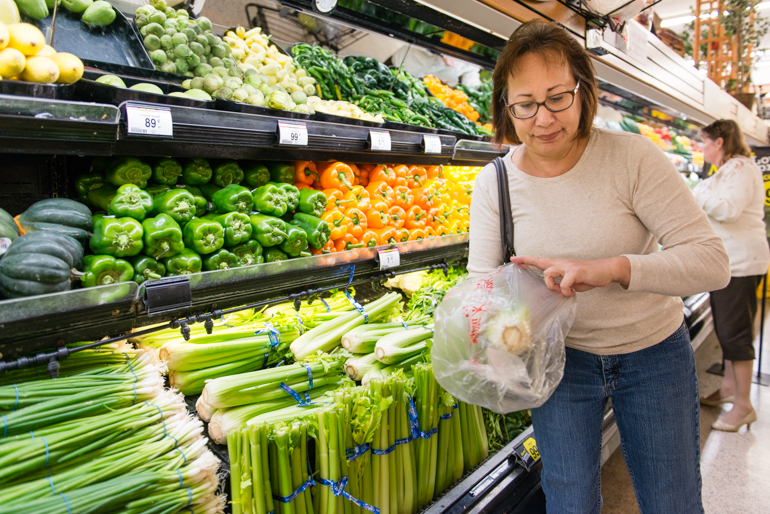 Tamura shops in the vegetable aisle after getting advice from Cecchini. (Heidi de Marco/KHN)

Cecchini encouraged her to keep an eye on sodium levels in future shopping trips. But he also assured her that it’s okay to make exceptions.

“You have to satisfy the mind and heart as well as your stomach,” he said.

Tamura has high blood pressure and high cholesterol and knows she needs to watch her diet. Shopping with the doctor was a reminder that one way to do that is by reading labels more carefully.

For that night, though, Tamura said she was sticking with her plans for spaghetti and garlic bread.

“Sounds like you have a nice dinner planned,” he said, laughing. “When do we get to come over?”

Hands Off That Frozen Pizza! Docs Advise Customers As They Shop