Sen. Tom Harkin Tuesday removed the hold he had placed on the nomination of Marilyn Tavenner to head the Centers for Medicare and Medicaid Services and said he would no longer stand in the way of a Senate vote despite actions by the Obama administration that he said violate “both the letter and the spirit” of the 2010 health care law. 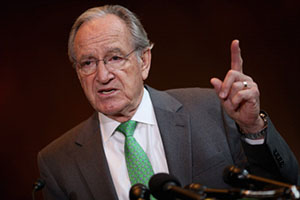 But after Harkin announced his decision on the Senate floor, Majority Leader Harry Reid said it was unclear when the Senate would vote on the nomination.

Tavenner was introduced at her confirmation hearing before the Senate Finance Committee by House Majority Leader Eric Cantor, R-Va., and has bipartisan support.  The committee approved her nomination with a unanimous voice vote before sending it to the full Senate.

Late last month, Harkin blocked Tavenner’s nomination to protest the White House’s decision to take $332 million from the health law’s prevention fund to help finance its online marketplaces, or exchanges, where eligible individuals and small businesses will be able to buy health insurance coverage. The administration took that step after Republicans denied a request in March for $949 million in additional funding for implementation efforts.

In his speech, Harkin said that he and the Obama administration had “a clear-cut agreement” that more money would not be taken from the prevention fund after $5 billion was used last year to help stop a scheduled cut in Medicare physician payments. The fund, which was created to finance prevention, wellness and public health activities, was supposed to spend $15 billion over the next decade.

“What we are seeing from the administration is at best mixed signals, and at worst a betrayal of the letter and spirit of the Affordable Care Act,” Harkin said. “This choice to take money out of the prevention fund will have serious negative consequences for the future health of the American people.”

Harkin said he hoped the administration would find a way to replenish the $332 million and make “some ironclad agreements that they’re not going to raid the fund again next year.”

Harkin could have made his hold a secret one – sometimes senators do so to avoid public scrutiny – but he said he wanted to draw attention to the administration’s actions. In his remarks Tuesday, Harkin criticized Tavenner, who is currently acting administrator at CMS, for allowing the money to be taken from the prevention fund without consulting anyone — including Harkin, who had championed the prevention fund’s inclusion in the 2010 health law and who chairs the Senate Health, Education, Labor and Pensions Committee.

Harkin said Tavenner is “very well qualified” to run CMS and that it is urgent to have her at the helm of the agency as the implementation of the health law goes forward. If Tavenner wins approval by the Senate, she would be the first confirmed administrator the agency has had since 2006.

But he also issued a warning.

While the CMS administrator works for the president, “advice and consent from the U.S. Senate might be something worth considering in her future actions,” Harkin said.