While Republicans cannot expect a full repeal of the health law while President Barack Obama remains in office, the GOP intends to “strike away at it, piece by piece,” Senate Finance Committee Chairman Orrin Hatch, R-Utah, said Tuesday.

But in a speech at the U.S. Chamber of Commerce, Hatch also said he expected that Republican and Democratic lawmakers would work together on several other key pieces of health legislation.

Hatch said there may be more bipartisanship in some “must pass items,” including continued funding for the Children’s Health Insurance Program and overhauling the way Medicare pays physicians, known as the “sustainable growth rate.”  On CHIP, Hatch said the Finance Committee has “heard from a number of governors from red states and blue stakes alike that they want to see this program extended. It has been a marvelous program. It has worked very, very well. I’m optimistic that we can work on a bipartisan, bicameral basis to extend CHIP in a responsible way.” 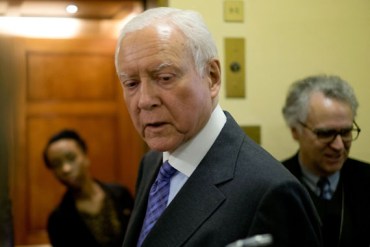 Hatch also said he wants the Finance panel “to address the SGR challenge once and for all.” Last year he co-sponsored legislation that would move physicians from the traditional system in which they are paid for volume and instead use financial incentives to encourage them to move to alternative payment models emphasizing quality care.  Finance must also act “sooner rather than later” to strengthen Medicare, Medicaid and Social Security, he said, noting that in the last Congress he supported several significant changes to Medicare, including raising the eligibility age and simplifying cost-sharing in the program.

In his remarks, Hatch said his committee would work on several measures to repeal elements of the health law — including its medical device tax and employer mandate — even though Obama would be likely to veto the measures.

“We can send them all to the president’s desk and have him try to explain to the American people why he’s right and they’re wrong,” Hatch said.

While House Republicans have passed dozens of measures to repeal or weaken the health law, the Senate has not voted on many of those bills because until this month, Democrats controlled the chamber. With Republicans now in charge with 54 seats, odds are better that some of the repeal measures will see floor consideration. But the GOP will still need some Democratic support to reach 60 votes to avoid a filibuster, and they are unlikely to garner enough Democratic support for the 67 votes needed to override a presidential veto.

In a wide-ranging speech that also touched on tax reform, trade and pensions, Hatch said the first health-related bill the Finance Committee will consider is legislation the House passed earlier this month. It allows employers to exempt workers who received health coverage through the Defense or Veterans Affairs departments from the tally used to determine whether the employer is meeting the health law’s requirements for providing coverage.

Hatch said Republicans need to be ready with an alternative to the health law if the Supreme Court later this year strikes down the provision that provides premium subsidies for low- and middle-income people buying coverage on the federal exchanges. If that happens, “we’ll need to act to mitigate the additional damage Obamacare will inflict on the health care system,” he said, but he offered no specific remedies. Along with Sen. Richard Burr, R-N.C., and former Sen. Tom Coburn, R-Okla., Hatch last year co-sponsored a health law alternative that, among its provisions, would repeal the health law’s individual and employer mandates.

Hatch said while he prefers to find bipartisan solutions on health care and other topics, he did not rule out a procedure known as budget reconciliation that allows legislation to pass with 51 votes in the Senate rather than the 60 needed to stop a filibuster. A number of Republicans have suggested that reconciliation could be used to repeal major portions of the health law.

“Should we decide to go that route, I’ll work with my colleagues on the Budget Committee to make sure whatever we do under the Finance Committee’s jurisdiction is effective,” he said.