How much does health insurance cost? It’s a deceptively simple question to ask, but a notoriously difficult one to answer, especially for people who buy their own coverage because they don’t get it through their jobs.

A report released today adds to what has so far been a limited data pool attempting to answer the question.

Average costs ranged widely, from about $136 a month in Alabama to more than $400 in Vermont and Massachusetts, according to the report from the Kaiser Family Foundation (KHN is an editorially independent program of the foundation).  The national average was $215. Unlike a few other reports on costs, this one looks at actual revenue insurers are bringing in and the number of people enrolling. 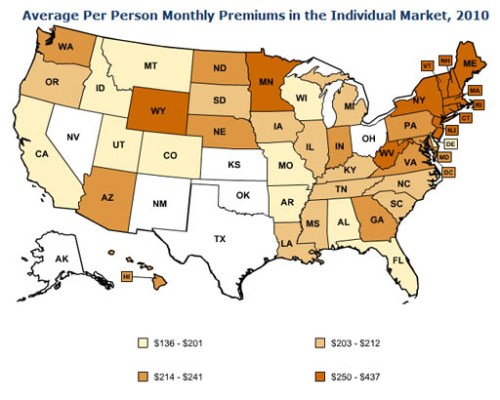 Now for the caveats: Those prices may not reflect what people actually see when they shop for coverage. That’s because the data cannot be broken out by age, so the average includes children, who are generally less expensive to insure, as well as people in older age ranges, whom insurers commonly charge the most. Medical costs and state laws vary around the country, affecting price. Finally, there was no way to determine differences in the types of coverage being purchased, such as how widely deductibles and co-payments varied.  That too, affects price.

There are a few other resources for consumers researching health insurance prices. One is a government site, which includes a calculator to determine estimated costs and types of policies available by state and zip code.  Actual prices could be different, because in most states, insurers can reject applicants with medical conditions or charge them much more. Under the federal health law, those rules change in 2014, when insurers will no longer be able to bar applicants with health problems or charge them more. Insurers will still be able to adjust price based on age and geography.