When Ronda Austin’s employer stopped offering health coverage last spring, she bought an individual policy from Blue Cross and Blue Shield of Florida. A month later she was given a diagnosis of multiple myeloma and began chemotherapy at her oncologist’s office near her home in Tampa.

But after several sessions, the physician’s office said that her plan covered chemotherapy only if it was provided in a hospital and told her she owed the practice $15,000. Austin called her plan’s member-services number but didn’t get anywhere.

So she stopped in at a new kind of insurance facility — her local BCBS of Florida retail store. There, a customer service rep sat down with her and called up her plan information online. She referred Austin to nearby Moffitt Cancer Center for subsequent chemotherapy treatments and explained how to address the problem with the oncologist’s billing department, which had misread her policy. The problem was quickly resolved. 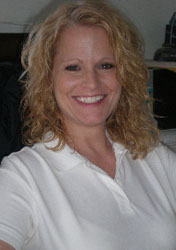 “It’s a great feeling to know the insurance company is standing behind you,” says Austin.

Health insurers increasingly want to make shopping for a new health plan as easy and convenient as dropping into a local retailer to buy a TV. In recent years, a number of them have opened stores where consumers can stop by to talk with a customer service representative about buying a plan or resolve questions about their current coverage. Some stores also sponsor health fairs or community seminars on nutrition and exercise. A few have primary-care doctors on-site.

“The stores are big, bold and easy to see,” says Marc Pierce, president of Stonegate Advisors, a research and strategy company in Chicago that has helped several insurers evaluate retailing. “For insurers, the impetus is to provide a tangible touchpoint so they can provide more value for their customers.” The trend should continue, he says, unless the U.S. Supreme Court strikes down the 2010 health-care law.

The number of individual health insurance customers is expected to grow significantly in coming years. Employer-sponsored health coverage is eroding, and in 2014 the law will require nearly everyone to have insurance, adding millions to the ranks of the insured. 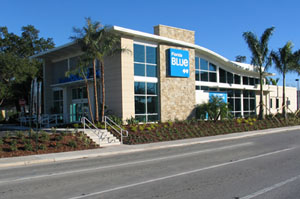 The stores are “a reaction to the shift from wholesale to retail in insurance sales,” says Paul Ginsburg, president of the Center for Studying Health System Change. “In wholesale sales, employers were the buyers. Now insurers are recognizing that retail will be more important.”

Insurers Highmark in Pennsylvania and BCBS of Florida have the largest retail presence to date, with several stores throughout those states. In New York, UnitedHealthcare recently opened a 16,000-square-foot facility in the Flushing section of Queens; it operates a number of smaller storefronts as well.

As insurers see it, bricks-and-mortar stores are one more way, along with online and telephone support, to reach out to consumers. “This is a third service option for people that like high-touch service,” says Craig Thomas, senior vice president for consumer and government markets at BCBS of Florida.

Insurers also hope that their visible presence in communities may generate some positive buzz. “We don’t really drive a whole ton of word-of-mouth on the positive side,” says Matt Fidler, vice president of consumerism and retail marketing at Highmark, a BCBS plan.

BCBS of Florida and UnitedHealthcare both emphasize providing comprehensive services. At the Queens store, for example, visitors, many of them Asian American Medicare and Medicaid beneficiaries, can get their claims questions answered in their native languages and get help signing up for social services programs such as food stamps and a pharmaceutical assistance program for seniors.

“We want to afford people a 360[-degree] experience, and give people access to all the information they need to take care of their health care,” says Yasmine Winkler, UnitedHealthcare’s chief product and marketing officer. Offering a smorgasbord  of services also keeps people coming back, creating consumer “stickiness,” she says.

In Pennsylvania, Highmark stores focus on sales. Ninety percent of the traffic at its eight stores is sales-related, says Fidler.

After being laid off from her job, Heather Manning bought insurance at the Highmark store at a strip mall in Easton shortly before her second child was due.

Although she wasn’t able to get coverage for herself until after she had the baby — her pregnancy was a preexisting condition, which individual insurance policies typically don’t cover — she bought coverage for her 6-year-old son. Once the baby was born in January, she bought a separate policy for the two of them. She pays $400 a month for all three of them.

The experience was very positive, she says. Before signing on with Highmark, she had gotten online quotes from several other insurers, which led to a barrage of sales calls from agents.

Highmark customer service reps, however, don’t get sales commissions. “It sets the tone to have it be educational,” says Fidler. “It differentiates us [from brokers] from the get-go.”

Although there are many upsides to the new insurance stores, Pierce cautions that they could backfire. Consumers already think that health plans make too much money, he says. “Here’s the potential for consumers to say, ‘Why are you building this big store? Why don’t you just reduce my premiums by 20 percent?'”