On June 18, Houston-based Sharon Roberts, who had been diagnosed with endometrial cancer a year before, put this message out into the Twitterverse:

The 55-year-old teacher was surprised when @aetnahelp, the customer service Twitter feed for the insurance company Aetna, quickly responded. Through Twitter and phone calls, the insurance company clarified that she didn’t need to take the more expensive test and then identified that she had been charged double by her hospital for other treatments. 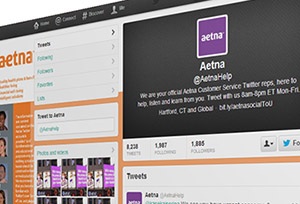 “If I hadn’t put out that snarky tweet about the BRCA test back in July, I would have probably just set up a payment plan to the hospital and paid out that bill,” she said.

The @aetnahelp Twitter feed is an example of how insurance companies are increasing their social media presence in an effort to amp up their customer service and capitalize on a platform that can serve to mediate, inform and advertise. The accounts also help companies manage their brands and do quick damage control on complaints aired in this public sphere.

The accounts, which include @askanthem, @cignaquestions and several accounts for various Blue Cross Blue Shield companies around the country, are often separate from larger company accounts that focus on marketing and sharing relevant health care news.

She works with six people to address the approximately 250 people who seek help through social media with claims or other services each month. O’Brien said the team tries to respond within an hour to users, who tend to be between 35 and 54 years old.

But the messages to company Twitter feeds can be as complex and diverse as the customers. The Tweets include anything from financial woes and specific questions about health plan coverage, to complaints:

@LadyBrik: Got my insurance/crazy charge worked out, but sadly it was with no help from @askanthem. Bummed I never got my promised call.

@ganne_hanrahan How can @AetnaHelp be the most widely accepted health insurance and still not be in network me (sic) any of my doctors?!

In both cases, the companies responded to these queries with resources or further contact information to resolve the issues.

Though companies are accustomed to fielding feedback and questions from their customers, the public nature of a platform like Twitter or Facebook can also be a call for accountability, said Ini Augustine, a social media strategist and head of SocialWise Media Group.

“Social media acts as a public documentation of how you resolve the situation,” she said. “It’s more than a marketing tool.”

Augustine predicted that the implementation of the health law in the coming months would probably spur the companies to use their platforms further, from organizing Twitter chats to engage customers, to answering questions about Obamacare for a new demographic.

While insurance companies are hoping to connect with their customers through social networks, they have not yet made enough headway to replace the telephone systems that can be a common source of frustration for patients looking to understand their health plans. Resolving an issue via Twitter is often just a gateway to a phone call or private message, since many personal questions can’t be answered through a public forum.

Nevertheless, O’Brien said the company learns more about their customers through this medium, allowing them to respond more efficiently, whether it is through the phone or interview.

She said there is an added benefit of using the platform to educate and inform their community about health and wellness, especially during a time of many changes in the health care system. Even so, O’Brien said it’s just the beginning.

Health Insurers Tune In To Twitter For Customer Service