>> Listen To The Audio

JACKIE JUDD: Good Day, This is Health on the Hill. I’m Jackie Judd. HHS Secretary Kathleen Sebelius defended herself today against criticism from congressional Republicans about calls she made to outside organizations in support of a group promoting implementation of the health care law. Mary Agnes Carey of Kaiser Health News covered the House hearing. She joins us now from Capitol Hill. Welcome, Mary Agnes.

JACKIE JUDD: According to the secretary, she had made a total of five calls made on behalf of Enroll America, including to three companies that HHS does regulate. What was the nature of the calls?

MARY AGNES CAREY: Two of those phone calls – and these were made to the Robert Wood Johnson Foundation and to the tax preparer H&R Block were to ask for funding to help Enroll America.  The other three calls were made to Johnson & Johnson, Ascension Health, which is a Catholic health care system, and the insurer Kaiser Permanente (Kaiser Health News is not affiliated with Kaiser Permanente). But the secretary said those calls were simply to discuss the efforts of Enroll America, and she did not solicit money from those three groups. 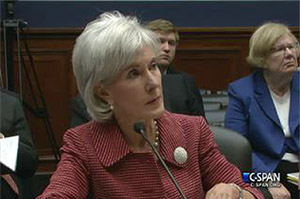 JACKIE JUDD: Are Republicans upset about the entirety of the calls or the fundraising aspect or the piece where she was talking to companies that HHS does regulate?

MARY AGNES CAREY: Prior to today’s hearing Republicans had been talking a lot about these calls, questioning whether or not they were appropriate. One senator called it the “Sebelius shakedown.” They said: How can the head of HHS be calling entities she regulates and asking for money. But today the secretary made it clear that she did not ask for money from companies she regulates, and the Republicans came back and asked a lot of specific questions about whom did you call and what did you ask for. Today’s hearing was more of a fact finding mission to find out exactly what happened.

JACKIE JUDD: And what was her legal defense for the calls?

MARY AGNES CAREY: She points to something called the Public Health Service Act. It’s been around since 1976, and in her view — and in the legal view of officials at HHS — gives her the perfect authority to reach out to groups and to try to get funds to help implement laws that benefit public health.

JACKIE JUDD:  Did Republicans point to other laws that may suggest otherwise?

MARY AGNES CAREY:  They didn’t point to other laws that suggest otherwise, but they do say that  — they just question whether or not it makes sense for someone in her position to reach out to companies that – even if you’re not asking for money, is it appropriate for her to call an entity she regulates. Does it create some sort of expectation that they have to give money? But she was very clear that she did not make those fundraising calls.

JACKIE JUDD:  Is there any precedent for this type of call by a cabinet secretary?

MARY AGNES CAREY:  If you look back in 2003, the Medicare prescription drug law passed that added prescription drug coverage to the Medicare program. As that law rolled out in 2005, 2006, there were a lot of efforts from HHS secretaries in that administration – Tommy Thompson and Mike Leavitt – to try to get pharmaceutical companies and insurance companies to participate and help fund outreach efforts.

The secretary today was very candid. She said that she knew and others knew – even when the health law was passed – that the government wouldn’t have enough money on its own to implement it. And that she is talking to anyone who will listen about trying to make sure that Americans who qualify for the health law’s exchanges or for the Medicaid expansion know about it and enroll in it.

JACKIE JUDD:  At the end of the hearing, was there a sense of where does this controversy go from here? Will she continue making these types of calls? What’s next?

MARY AGNES CAREY:  I think that she will. She was asked that by a reporter on the way out. She said that she would continue to try to raise money to implement the Affordable Care Act. And in a way, she has a statutory obligation to do so.

The administration has come to Capitol Hill. It has asked for additional money. Republicans on Capitol Hill do not want to give additional money to implement the health care law. The Department of Health and Human Services has talked about how they have moved funds around within their purview to fund the law, but more will be needed, and I get absolutely no sense that she’ll stop doing this.

Sebelius Faces Questions About Calls To Outside Groups