Nearly two years after the passage of the federal health law, more than 40 percent of people say they know little or nothing about how the law will affect them, according to the Kaiser Family Foundation’s latest monthly health tracking poll, published in December.  That figure hasn’t budged since April 2010, just after the law was signed. 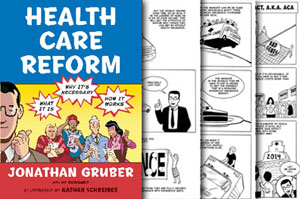 Jonathan Gruber, an economist at the Massachusetts Institute of Technology, aims to change that with a book, “Health Care Reform: What It Is, Why It’s Necessary, How It Works,” that explains the ins and outs of the law in an innovative way: an adult comic-strip form similar to graphic novels.

Gruber was one of the architects of the Massachusetts’ health care overhaul, which included many features that appear in the federal law, and he advised the Obama administration and Congress on the Affordable Care Act. I spoke with him about his new book, which he co-authored with HP Newquist. The book is illustrated by Nathan Schreiber.

Q. What made you decide to write a book for consumers about health reform?

A. I think what really inspired me was hearing that when you polled consumers about the Affordable Care Act they were split in their support. But when you polled them about individual pieces of the law, they liked it. As an educator, you didn’t have to do any more than explain what the law did [to gain support]. It needed to be explained in a way that people understood.

Q. Why did you choose a graphic novel format?

A. The publisher approached me about doing it that way. At first I wasn’t that enthusiastic. I didn’t think it would be that effective. But the publisher said they had done a graphic novel about the 9/11 Report. My son likes graphic novels, he’s 17. He said it’s a great opportunity, it’s a great medium. When you’re on a plane and they want to teach you what to do in case of accident, they hand you a graphic. I think it was the right call.

Q. Who’s the primary audience for this book?

A. I wrote it for the person who is confused and open-minded about this bill. The person who doesn’t understand it. The two groups I really hope will read it and benefit from it are the independent voter who was inclined to like Obama and knows it’s a big, transformative bill and wants to learn more, and the disaffected Democratic voter. I’m stunned that many don’t support it.

Q. Do you think it will change any minds? Turn opponents into supporters?

Q. You showcase Massachusetts as an example of how health reform can work, noting that it employs some of the same elements that appear in the federal law, like the individual mandate that requires people to have insurance. What should readers be aware of about Massachusetts’ experience with health reform? Has anything surprised you?

A. I would say the point the book tries to make is that Massachusetts was successful in what it tried to do. It reduced the number of uninsured and lowered non-group insurance premiums. Premiums for individual market plans fell by 50 percent relative to national trends. The biggest surprise to me is that employer-sponsored health insurance actually went up after reform when it was falling everywhere else in the country. It speaks to the power of the [individual] mandate. People said, “Give me health insurance,” and they did.

Q. You talk about how health care reform will help Anthony, Betty, Carlos and Dinah, all of whom have different health insurance situations. But you don’t discuss what will happen to Emilio the undocumented worker, who won’t get coverage under the new law. Did you consider talking about who loses out under health reform, including the roughly 11 million illegal immigrants?

A. You hit on a great issue: Who loses out under the law. People don’t lose out. Emilio doesn’t lose out, he just doesn’t gain. A lot of people don’t gain. By design, the bill leaves a lot of people alone, including those with employer-sponsored insurance. They don’t lose but they don’t gain either. As for undocumented immigrants, there was no support to help them. Unfortunately, the law leaves them out in the cold. That was just a political reality.

Q. I know it’s a big piece of legislation and you were trying to cover a lot of ground, but I couldn’t help thinking as I read the book that in some places you oversimplified in such a way that it made the law look better than it is. Can you talk a bit about concerns some may have that you may confuse readers by making sweeping statements about the benefits of this law?

A. Certainly I wrestled a lot with where to simplify and where not to. I think I tried my best to never be misleading. At the end of the book there’s a set of references where people can go to learn more about the law. I think the truth is that most people don’t want that level of detail. It’s for people who just want to know what the heck is this bill.

Q. In the book you discuss the long-term care program created under the law, the CLASS Act, which the administration has decided not to implement, at least not at this time. Obviously, this law is changing and evolving. Depending on what happens in the next election, it could change a lot. What do you think is going to happen? Do you have any plans to update the book?

A. I am fairly confident, I think there’s a better than 50 percent chance, for the Supreme Court not to turn down the mandate, and voters not to kick Obama out of office. If both those things go that way, I think it will be an incredibly positive thing for the Democrats in 2016. It will be good for them because the law will be doing good things by then. States need to move more quickly if we’re going to implement the law smoothly. I can see it starting out roughly and being in great shape in a year or two.

My guess is I wouldn’t want to update [the book]. I haven’t really thought about that.

Insuring Your Health The Health Law