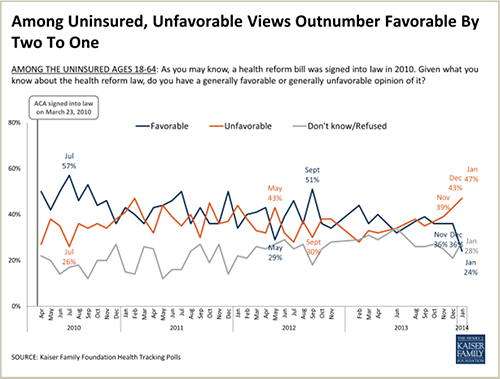 Uninsured Americans — the people that the Affordable Care Act was designed to most aid — are increasingly critical of the law as its key provisions kick in, a poll released Thursday finds.

The poll did not pinpoint clear reasons for this drop, which comes in the first month that people could start using insurance purchased through the online marketplaces that are at the heart of the law. It did point out that more than half of people without insurance said the law hasn’t made a difference to them or their families. In addition, the pollsters noted that almost half of people without coverage were unaware the law includes subsidies to offset premium costs for people of low and moderate incomes.

Among all Americans, the sentiment was also negative, with 50 percent holding unfavorable views of the law and 34 percent supporting it. Views on the law have not been even since the end of 2012. Despite this, just 38 percent of the public wants the law to be repealed.

The survey reported that four in 10 uninsured people said they had tried to get coverage in the past six months, either through Medicaid, a private insurer or the new health care online marketplaces. Seventy percent of the uninsured said they viewed health coverage as important and necessary.

The survey found that a quarter of Americans reported a change in their insurance status during the past six months. Roughly half of them attributed it to the health law, and the others cited an unrelated reason. Among those who linked their new circumstances to the health law, the most common type of change was switching health plans. About even numbers said they had gained coverage as said they lost coverage.

Health Law Is A Tough Sell To Uninsured