If you think that the Affordable Care Act has surmounted all of the major legal attacks its opponents could come up with, think again. Critics of the federal health law have only begun to fight, although most of their battles are decidedly uphill.

The pending challenges to the law, and related regulations, range from the Goldwater Institute’s claim that it gives the Independent Payment Advisory Board unconstitutionally broad powers over Medicare services and payments, to the more than 35 lawsuits by religious employers attacking a Department of Health and Human Services rule that requires them to provide their employees with insurance that covers women’s contraceptives without a copayment.

By far the broadest and potentially most damaging of the legal challenges turns on whether Congress intended that tax credits and subsidies to help consumers buy health insurance be available only through state-created exchanges. Many states are signaling that they may not create their own exchanges, leaving the federal government to do so, as the law requires. 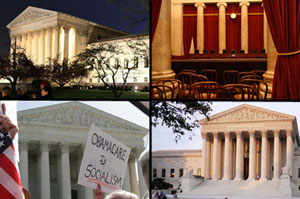 If subsidies and tax credits aren’t available in states with federally run exchanges, conservative legal scholars say, then two other lynchpins of the law would also be undermined: the requirements that employers of a certain size offer insurance and that most individuals buy insurance.

Supporters of the law scoff at the arguments, asserting that Congress clearly intended that the subsidies and credits would be available in all exchanges.

But, confident of their case, some health law opponents, including Jonathan Adler of Case Western Reserve Law School, Michael Cannon of the libertarian Cato Institute and National Affairs editor Yuval Levin, are urging Republican-led governments to refuse to set up the online insurance purchasing exchanges, which would, as the argument goes, make their residents ineligible for the tax credits and subsidies. They say that this step also would gut the so-called employer mandate, which the law says will take effect in states where residents are eligible for such assistance.

The mandate requires employers with more than 50 full-time workers to offer health insurance policies for employees and their families that include a minimum set of benefits, or pay a tax of $2,000 per employee for failing to do so. The tax wouldn’t apply to the first 30 workers.

Health law critics theorize that by refusing to set up exchanges, states could also carve a hole in the provision that requires individuals to either obtain insurance or pay a tax as a consequence of choosing not to, which the Supreme Court upheld in June. And if states could disable both the employer mandate and part of the individual mandate, they could wreak havoc with the law’s overall operation.

Indeed, if lots of states also refuse to participate in the Medicaid expansion, as the Supreme Court ruled they can do without penalty, “the ACA may end up being fully applicable only in a portion of the United States,” says David Rivkin, a Washington lawyer who spearheaded the constitutional challenges that fell one vote short of striking down the entire measure last summer. Rivkin and some other ACA critics hope that by exploiting what they see as the law’s still-unresolved flaws, they can hasten its inevitable failure to work as advertised, and thus clear the way for Republicans to dismantle it.

The Obama administration and other ACA supporters dismiss these legal theories as far-fetched and view conservatives’ broader hopes of crippling the entire law as wishful thinking. They say states have no power to limit the subsidies, the employer mandate, or the individual mandate; and, that if they did, the effect would be to block their own citizens from receiving large federal tax breaks and obtaining affordable health insurance.

Tracking The Argument
Last year, the Internal Revenue Service issued an interpretive rule saying that federal exchanges also would have the power to distribute the tax credits and subsidies.

But Oklahoma Attorney General E. Scott Pruitt, a Republican whose state has refused to set up an insurance exchange, has urged a federal district court to invalidate the IRS rule and thereby nullify the employer mandate in Oklahoma.

With only 17 states having so far committed to creating their own health insurance exchanges — in part because of concern that the administration has not provided clear guidance on how they should work — more lawsuits could be on the way, brought by states, employers or both.

As even some health law supporters concede, the claim that Congress denied to the federal exchanges the power to distribute tax credits and subsidies seems correct as a literal reading of the most relevant provisions. Those are sections 1311, 1321, and 1401, which provide that people are eligible for tax credits and subsidies only if “enrolled . . . through an Exchange established by the state” (emphasis added).

Why would the measure’s drafters have wanted to cripple any fallback exchanges created by the federal government? Pruitt, Cannon, Adler, and others claim the legislative history shows that the drafters wanted to give states strong incentives to create their own exchanges, and expected them to do so.

State governments hostile to the law might also hope that refusing to create exchanges could free some of their residents from the individual mandate, which imposes tax penalties on people who don’t obtain insurance.

These arguments are detailed in a paper to be published in Health Matrix by Adler and Cannon. There are, of course, also forceful counterarguments.

The Counterpoints
The administration and other advocates say that the 2,700-page law’s language on the powers of federal exchanges clearly did not reflect the intent of Congress. That, they say, was to give federal exchanges all powers enjoyed by state exchanges, in keeping with the overarching purpose of making health insurance affordable for the vast majority of Americans.

The law’s legislative history and a related statute establish “that Congress understood that premium tax credits would be available through both federal and state exchanges,” wrote Timothy Jost, of the Washington and Lee University School of Law, in the Health Affairs Blog.

Jost said that while “the ACA is not a model of clear drafting,” the Adler-Cannon theory “has little chance in succeeding in the courts, and even less chance of being addressed by the courts anytime in the near future because of jurisdictional problems.” He referred to a federal law, the Anti-Injunction Act, that bars courts from enjoining federal taxes — perhaps including the tax to be imposed on employers who defy the mandate — before they come due. In addition, argued Jost, only employers — not states such as Oklahoma — would have legal standing to challenge the IRS’s interpretation, and probably not before 2015.

It’s unclear at this point whether many businesses that would like to avoid the employer mandate, or many states besides Oklahoma, will be motivated to take on the Obama administration in the courts again.

It’s also unclear how receptive courts will be to efforts by Republican-run states to dismantle part of a law that the Supreme Court has so recently upheld after a titanic battle.

And, in the perhaps unlikely event that the dispute over the powers of federal exchanges reaches the Supreme Court, would Chief Justice John Roberts — having made his uneasy peace with Obamacare in June — have the stomach to resume hostilities based on a legal analysis that even lawyers find hard to follow?

Stuart Taylor, Jr. is an author, journalist and nonresident fellow at the Brookings Institution.