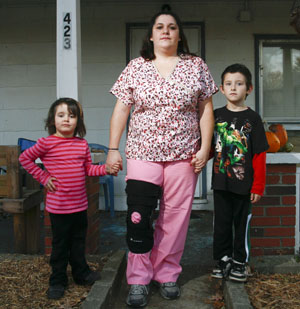 KANSAS CITY, Mo. – After Tonya Bauserman slipped in a grocery store and hurt her right knee last July, an emergency room doctor prescribed painkillers and told her to see an orthopedic surgeon.

But Bauserman, 27, who’s insured by a Medicaid managed health care plan called HealthCare USA, says she had trouble finding an orthopedist in her plan who would see her. Finally, she drove 2 ½ hours to Columbia from her home in a northwestern suburb here to see a physician, who fitted her for a brace and recommended physical therapy. HealthCare USA later said it wouldn’t pay for the brace.

Furious, Bauserman says her experience was “crazy.” But it’s not uncommon. Primary care physicians in the area say a shortage of specialists in Medicaid managed-care networks makes it difficult sometimes to refer patients.

Matthew Eyles, a spokesman for Coventry Health Care, which owns HealthCare USA, wouldn’t comment on Bauserman’s case but says that the plan has “a solid network” of all types of health providers.

HealthCare USA is one of dozens of private managed health care plans providing care to nearly half the nearly 50 million Americans on Medicaid, a state-federal program for the poor and disabled.

That number is increasing. Beginning in 2014, an additional 16 million people will become eligible for Medicaid, under the new health care law. People with incomes below 133 percent of the federal poverty level ($14,403 for an individual or $29,326 for a family of four in 2010) will qualify. Currently, eligibility varies greatly by state. In many cases, Medicaid recipients will be required by their home states to enroll in managed-care plans. 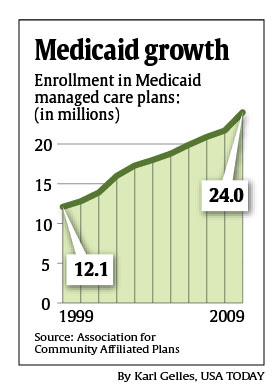 That represents a potential bonanza for companies such as Coventry, which covers 462,000 Medicaid enrollees in eight states – including 196,000 in Missouri – and wants to grow. Also likely to capitalize: big carriers including UnitedHealthcare (which runs the biggest Medicaid managed-care plan, with 3 million enrollees) and Aetna, as well as niche companies that specialize in Medicaid, such as Molina Healthcare, Centene and Amerigroup.

“Medicaid health plans without exception are seeing reform as a tremendous business opportunity, and they are preparing for the expansion as a chance to grow and expand,” says Vernon Smith, a principal with consulting firm Health Management Associates.

But the coming boom is sparking debate about whether Medicaid managed care is best for patients. In traditional fee-for-service Medicaid, enrollees can go to any doctor willing to participate in the program, although finding a specialist can be a challenge in some areas. In managed care, enrollees must see providers in their plans’ networks.

Patient advocates and doctors complain that some managed care plans aren’t keeping promises to improve care while holding down costs. “We see the health plans managing costs, not managing the care,” says Dan Purdom, a family doctor and medical director at the Samuel U. Rodgers Health Center, a community health center in Kansas City. He says he frequently has had to send patients to Columbia, about a two-hour drive away, to find specialists such as cardiologists.

“We get a lot of calls from parents whose child needs a specialist but none will see their children,” says JoAnne Morrow, director of Advocates for Family Health at Legal Services of Eastern Missouri, a non-profit group that helps patients in Medicaid managed-care plans.

Morrow and other advocates also say they deal with patients who have difficulty getting their health plans to approve expensive services, such as CT scans and some surgeries.

Missouri Medicaid Director Ian McCaslin acknowledged at a Jefferson City forum in July that managed care is “not a perfect system” and that managed-care plans – which typically pay doctors little more than the low rates the state pays in traditional Medicaid – have trouble getting doctors to contract with them. But he said the state is trying to do a better job of ensuring access.

Some experts, such as James Verdier, senior fellow at non-partisan think tank Mathematica Policy Research, say managed-care plans are generally better than traditional Medicaid in “saving money and improving quality” and ensuring access to doctors. But he says it’s difficult to generalize, as there is “tremendous variation” among plans.

Even before the 2014 expansion of Medicaid enrollment, cash-strapped states, hoping to control costs, are increasingly turning to managed care – and requiring Medicaid recipients to leave the traditional program and enroll in the plans.

Louisiana and Mississippi, which have never used Medicaid managed-care plans, are planning to introduce managed care statewide beginning next year. 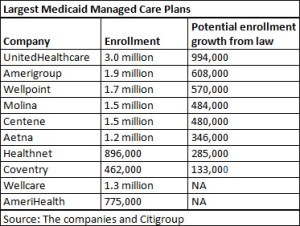 In Missouri, the Department of Social Services (DSS), which oversees Medicaid, has proposed requiring all Medicaid recipients in the state – except the disabled and the elderly – to enroll in managed-care plans. Currently, about 425,000 people are in Medicaid managed care, about half the total number on Medicaid.

In West Virginia, beginning in January, 55,000 recipients with disabilities and mental health problems will be required to enroll in Medicaid managed care. Criticism from advocates temporarily delayed the move. About half of West Virginia’s 325,000 Medicaid enrollees are already in managed-care plans, according to Centers for Medicare & Medicaid Services 2009 data.

Some states that have used managed care mostly in urban areas, such as Texas and Nebraska, are extending Medicaid managed care into rural areas.

Typically, states pay managed-care plans a lump sum for each enrollee to provide all the health services needed. Predictability is invaluable, says Darin Gordon, director of Medicaid in Tennessee, which has required all recipients to be enrolled in managed care since 1994. By contracting with managed-care plans, states know at the beginning of each year how much they’ll spend on Medicaid, because the health plans assume the financial risk if costs exceed projections.

Faced with a huge opportunity, managed-care plans are scrambling to develop expansion strategies.

“We are looking at every place we don’t have a presence and are trying to prioritize states in terms of how we think they are committed to managed care,” says Russell Petrella, president of UnitedHealthcare’s Medicaid managed care operation, UnitedHealthcare Community & State, formerly known as AmeriChoice.

Citigroup analyst Carl McDonald says that UnitedHealthcare could end up with nearly 1 million new customers as a result of the law’s Medicaid expansion.

The new opportunities for managed care come with risks. Given the states’ budget problems, it’s far from clear the plans will be adequately paid or whether they’ll be able to recruit enough doctors.

The concern is not that states will default on payments, but that they might cut reimbursement to the plans which could result in plans pulling out of markets or the plans having to cut optional benefits such as dental care or paying providers less, which can make it harder to attract doctors.

Aetna’s Kelly says the company will focus its expansion plan on states committed to maintaining funding to health plans so rates keep up with rising health costs. Aetna this year began offering Medicaid managed-care plans in central and eastern Pennsylvania.

“It’s frustrating,” she says. Wood says her medical practice has stopped taking Healthcare USA due to a contract dispute.

Carol Clay, whose grandson Kaleb Wooten lives with her in Sedalia, Mo., had trouble finding a doctor in Molina’s network when the 7-year-old’s tonsils needed to be removed. 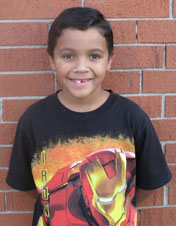 Kaleb Wooten’s grandmother had trouble finding a doctor in Molina’s network when the 7-year-old’s tonsils needed to be removed. (Family photo)

Eventually, the company got him an appointment, but with a doctor nearly two hours away. “I initially thought, ‘You’ve got to be kidding,'” Clay says. But she made the drive, and the plan reimbursed her for her gas costs.

Missouri, as do most other states, requires health plans to ensure that patients don’t have to go too far to find a doctor – typically, within a 30 minute drive.

Missouri Medicaid officials acknowledge they don’t have the funding to call the health plan’s doctors to make sure they’re taking Medicaid patients. But the state does survey recipients each year to make sure they have timely access to doctors, says Scott Rowson, spokesman for DSS. The state also requires managed-care plans to assess their availability of doctors to ensure compliance with the state contract. Medicaid Director McCaslin declined to be interviewed.

In an evaluation report done last year of plans operating in the Kansas City area, 76 percent of Medicaid managed-care enrollees say getting care is “not a problem,” and 90 percent say they always or usually “get care quickly.”

A report completed last December for the state found no significant difference in access to doctors or quality of care between the fee-for-service Medicaid program and managed care. Missouri officials say managed care saved the state about $38 million in 2009.

Some patients praise their health plans. When Jessica Landfair of Wentzville, Mo., was pregnant with her sixth child, she started having contractions at 25 weeks. Her plan, Molina, ordered a home health nurse to help and made sure she got weekly shots of a drug to delay early delivery. It also had a nurse call each week to check on her and provided her transportation to get to doctor’s appointments. She delivered a healthy baby at 39 weeks.

“I never new knew they had this much to offer,” she said of the health plan. “They were really supportive.”