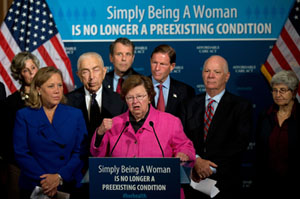 Sen. Barbara Mikulski and other Democratic senators talk at a news conference on preventive health in Washington in July (Photo by Win McNamee/Getty Images).

The ACA guidelines’ promise of free contraception may have generated the most controversy, but the law also provides many other services for women, including free screening for HIV, chlamydia and gonorrhea, and pregnancy-related benefits such as screening for gestational diabetes, and breast-feeding support, supplies and counseling.

“Groups that were really focused on the health of women were identifying specific gaps that they wanted to make sure were covered,” says Adam Sonfield, a senior public policy associate at the Guttmacher Institute, a research and advocacy organization.

Under the law, new health plans or those whose benefits have changed substantially are required to provide four types of preventive care without any co-payments or other forms of cost-sharing: services recommended by the U.S. Preventive Services Task Force, immunizations recommended by the Centers for Disease Control and Prevention’s Advisory Committee on Immunization Practices and preventive services and screenings for women and for children that are recommended by the Health Resources and Services Administration.

Sen. Barbara Mikulski (D-Md.) championed adding women’s preventive services recommended by HRSA following an outcry over a Preventive Services Task Force recommendation that regular mammography screening for most women begin at age 50 rather than age 40. In a separate amendment, she successfully pushed to reinstate the earlier recommendations that called for mammography screening starting at age 40. The new requirements substantially broadened the free preventive services available to women.

The new law requires most health plans to begin providing free contraceptives to women when their new plan year begins this fall or next year. It covers all FDA-approved methods, including permanent ones such as tubal ligation. But since it’s scope is limited to women’s services, it does not offer free coverage for vasectomies.

Men’s health specialists say both men and women could have benefited from such a requirement. Even though they’re generally simpler and less expensive than female sterilization, cost can be a factor that deters men from getting vasectomies.

“Particularly for older men who are interested in playing a role in pregnancy prevention through sterilization, there are not many low-cost services available, even in a large city,” says David Bell, medical director of the Young Men’s Clinic at NewYork-Presbyterian Hospital’s Family Planning Clinic.

The health law also requires free coverage for screening for a number of sexually transmitted diseases in women but not men. For example, HIV screening is covered annually for all sexually active women. In men, free screening is recommended for those who are at higher risk, such as men who have sex with men or with multiple partners.

Similarly, the Preventive Services Task Force, a federal panel of experts, recommends screening all sexually active women younger than 25 for chlamydia and screening at-risk women for gonorrhea. But the task force says there’s not enough evidence to make such recommendations for men.

Some of the new preventive coverage requirements do address men’s sexual health. For example, under CDC recommendations that become effective in December, new health plans must cover the three-shot human papillomavirus (HPV) vaccine for young men at no charge. Previously recommended for young women primarily to prevent cervical cancer, the vaccine is also associated with some cancers that affect men. It is recommended routinely for young men aged 11 or 12, and for those ages 13 to 21 who haven’t been vaccinated.

It’s no accident that most of the new preventive benefits are aimed at women, say experts. “Women bear a disproportionate burden when it comes to sexually transmitted diseases and preventing pregnancy,” says Deborah Arrindell, vice president for health policy at the American Social Health Association, an advocacy group.

As women enter their reproductive years, they typically begin to see a primary-care practitioner, often a gynecologist, for regular checkups and to receive contraceptives. In 2009, 66 percent of women ages 18 to 44 visited a primary-care provider, compared with 52 percent of men in that age group, according to the Centers for Disease Control and Prevention’s National Center for Health Statistics.

Although men may visit the doctor to get a physical for work, sports or school, it’s not routine, say experts. “Many of the men who visit the family planning clinic are sent by their partners,” says Bell. “Fifty percent came because of a female in their life.”

Part of the problem in improving coverage of sexual and reproductive health for men is that research is scarce and comprehensive clinical guidelines have never been established, say experts. The Preventive Services Task Force, in declining to recommend screening for chlamydia in men, for example, said there was a “critical gap” in research on the benefits of screening men for the disease.

Some women’s health advocates note wryly that although there may be a relative dearth of data related to men’s sexual and reproductive health, much of the broad medical research conducted to date has focused on men. Clinical trials for many drugs, for example, for many years excluded women.

Regardless, advocates agree that leveling the playing field for the sexes for sexual and reproductive health services only makes sense.

“It seems foolish to do it differently for women than for men,” says Sonfield.