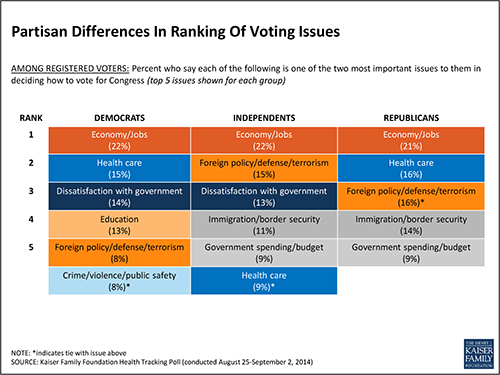 Heading into the 2014 mid-term congressional elections, health care is not shaping up as a make-or-break issue, according to a new poll.

Health care trails jobs and the economy as a top issue on voters’ minds this fall, 21 percent to 13 percent. Only  3 percent of voters in the monthly tracking poll by the Kaiser Family Foundation mentioned the health law by any name (Affordable Care Act/Obamacare) when asked about issues most likely to determine their vote. (Kaiser Health News is an editorially independent program of the foundation).

Health care is even less important to independent voters, those who frequently decide close races. While Democrats and Republicans both chose health care as their second ranked issues with 15 and 16 percent respectively, independents rank of health care tied for fifth with 9 percent.

The issue is, however, nonetheless playing a role in the current campaigns, particularly in key swing states where control of the U.S. Senate is at stake. Republicans need to capture a net gain of six seats to gain a majority in that chamber.

Forty-eight percent of registered voters said they are “tired of hearing candidates for Congress talk about the health care law” and think they should move on to other issues, while 47 percent say the health care debate is important and should continue. Not surprisingly, more than 60 percent of Republicans favor keeping the debate going. About the same percentage of Democrats say candidates should move on, and independents are evenly split.

Republicans voters are also more enthusiastic than Democrats about voting this fall. But apparently the health law isn’t driving that enthusiasm to any great degree. When Republicans who said they were eager to vote were asked the reason for their enthusiasm, the top answers were giving Republicans control of the Senate (13 percent), wanting their vote counted (10 percent) and getting rid of incumbents (10 percent). The health law was named by 3 percent.

The poll was conducted in a telephone sample of 1,505 adults, including 1,239 registered voters. The margin of error is +/- 3 percentage points for both groups for the full sample.