Imagine if scientists could recreate you—or at least part of you—on a chip.

That might help doctors identify drugs that would help you heal faster, bypassing the sometimes painful trial-and-error process and hefty health care costs that accompany arriving at the right treatment.

Right now, at the University of California, Berkeley, researchers in bioengineer Kevin Healy’s lab are working to make that happen. Funded under a provision of the health law, they’re trying to grow human organ tissue, like heart and liver, on tiny chips. 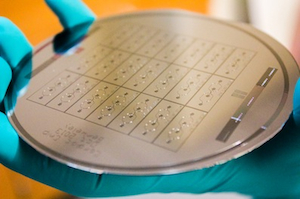 Scientists use wafers like this one to build tissue chips, which mimic how organs in the body work. (Photo Courtesy of UC Berkeley)

These aren’t your standard computer chips. These miniature networks, derived from adult skin cells coerced into becoming the type of tissue scientists want to study, grow on miniscule pipe-like plastic chambers glued atop a microscope slide.

The research is designed to find ways to get that tissue to live and mimic how real human organs function. If so, they could provide a cheap and quick way of weeding out treatments that are toxic or just don’t work—early on, in the lab, replacing at least some of the tedious years of testing on animals and humans. What’s more, because drugs traditionally are developed with a one-size-fits-all approach, clinicians often don’t know how well medications will work on individual patients. According Anurag Mathur, one of the Berkeley researchers, it could lead to “a personalized medicine, patient-specific readout of any drug you want to test.”

The work is being funded by $1.2 million from the Cures Acceleration Network — one of dozens of state and federal agencies established by the health law. As its name implies, its mission is to fund research that can be speedily transformed into treatments and to streamline the drug-approval process. It’s part of Obamacare’s little-known aim to fast-track biomedical research that has the potential to improve patient care and cut costs.

“The Affordable Care Act was all about getting interventions to people to improve health, in the broadest sense” and this type of research falls in line with that, says Dr. Chris Austin, the director of the National Center for Advancing Translational Sciences (NCATS), an agency within the National Institutes of Health that oversees the Cures Acceleration Network.

The network, was billed as health care’s equivalent to the Department of Defense’s research arm, the Defense Advanced Research Projects Agency. DARPA has funded research in a variety of areas, including robotics and artificial intelligence — technologies that are changing everything from weaponry to transportation to medicine. But the Cures Acceleration Network pales in funding power.

DARPA’s annual budget hovers around $3 billion, and when the late Pennsylvania Sen. Arlen Specter first proposed the Cures Acceleration Network in 2009 as an independent agency, he slated it to have a $1 billion budget. Instead, it was incorporated into NCAT, and in its first year, it got no funding. That has been upped to $10 million.

The Berkeley project is part of a larger effort to explore what are called “organoid chips.” The Cures Network is funding several other  biochip-related projects and in a study published in the journal Nature Medicine this past May, scientists from Harvard University and other researchers used a “heart-on-chip” approach to research Barth syndrome, a genetic disorder that affects cardiac tissue. This type of research is still in the early stages, but if it’s successful, it could significantly streamline drug research and maybe even reduce drug prices.

Right now, it can take billions of dollars and years to develop a single medication. For every one that gets the Food and Drug Administration’s approval, 40,000 others don’t make it through the process. That raises companies’ expenses, and experts often point to these bleak trends as one of the root causes for the high prices for new drugs. If the organoid research pans out, there could be as much as a 10-fold improvement in the speed, cost, and accuracy of developing new drugs, according to Austin.

The technology borrows from techniques developed by the semiconductor industry decades ago to make transistors—the building blocks of the modern computer. The ability to print ever smaller transistors at faster speeds allowed computers to shrink from expensive room-sized behemoths into cheap, widely available portable machines with many more uses than the inventors ever imagined. That revolution was seeded with money from the nation’s space program, and now, some scientists say, biotech has a similar opportunity.

Once the blueprint is set for specific types of biochips—ones that mimic the structure of the liver or gut, for instance—manufacturing them could eventually cost as little as a few bucks, says Peter Loskill, one of the Berkeley scientists. The difficult—and expensive—part is making sure that the cells assemble themselves properly and that these microtissues work like the real thing. That’s what Healy’s lab is focusing on now.

Eventually, scientists believe they could run multiple experiments on different drug candidates and various doses in different tissues at once. It would be something like the equivalent of a massive parallel computer, but for biology. Mathur and Loskill are starting with building a combination chip containing heart and liver tissue in collaboration with another bioengineer, Luke Lee, and his lab at Berkeley. If their work is successful, they hope to collaborate with other groups in the Cures Acceleration Network to hook up various proto-organs, Lego-style, to create a very simple model of the human body. This type of work could give scientists insights into how and why medications work on individual organs and how they affect whole systems.

In Lieu of Animals

Certainly, some experts are skeptical. Fundamentally, they question how well these chips mimic real organ structure and function. After all, they lack blood vessels, so they live only for months at most. Plus, they don¹t replicate all the intricacies of real organs and organ systems. In the case of those that mimic the brain, researchers have said that the full-fledged circuitry underlying adult brain function isn¹t entirely there.

Meanwhile, others question whether this work will ultimately translate into lower prices. “Right now, [for] any drug that’s discovered, people can charge what they want because there’s no competition,” says Atul Butte, a data scientist at Stanford University and co-founder of NuMedii, a Palo Alto-based startup that is looking for new ways to use existing medications.

But if they come to fruition, organoids could lead to even larger opportunities, beyond the speed of drug research and the price of medications.

Today, much pre-clinical work is done in animals and doesn’t always yield results that mimic how human systems work. “The knowledge gaps we face in biomedical research are enormous. We just don’t know all that much about what causes diseases,” says Bernard Munos, the founder of the Innothink Center for Research in Biomedical Innovation who also sits on the Cures Acceleration Network board. “We’re really throwing darts.”

Organoids could change that. At least in theory.