For decades, states have set rules for health coverage through mandates, laws that require insurers to cover specific types of medical care or services. The health law contains provisions aimed at curbing this piecemeal approach to coverage. States, however, continue to pass new mandates, but with a twist: Now they’re adding language to sidestep the health law, making it tougher than ever for consumers to know whether they’re covered or not. 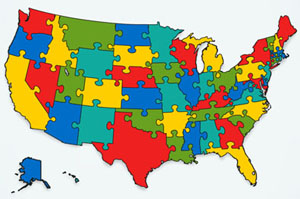 State coverage mandates vary widely. They may require coverage of broad categories of benefits, such as emergency services or maternity care, or of very specific benefits such as autism services, infertility treatment or cleft palate care. Some mandates require that certain types of providers’ services be covered, such as chiropractors. They may apply to all individual and group plans regulated by the state, or they may be more limited.

While patient advocates view state mandates as a crucial tool in their efforts to address coverage shortcomings, the insurance industry generally opposes mandates, saying they drive up the cost of insurance.

Since the health law established a comprehensive set of “essential health benefits” that individual and small group plans must cover (unless they existed prior to passage of the law in 2010), it was hoped that mandates would no longer be much in demand, says Sabrina Corlette, project director at Georgetown University’s Center On Health Insurance Reforms.

Mandates are “not the most rational way to build a benefit package,” says Corlette.

To discourage states from passing mandates that go beyond essential health benefits requirements, the law requires states, not insurers, to cover the cost of mandates passed after 2011 that apply to individual and small group plans sold on or off the state health insurance marketplaces. If a mandate increases a plan’s premium, states will be on the hook for the additional premium cost that’s attributable to the mandate.

The payment requirement is waived until 2016, says Kelly Brantley, a senior manager at Avalere Health who’s looked at mandates related to infertility coverage, and regulations describing how the process will work haven’t yet been issued.

Rather than forgoing mandates altogether, some states are simply excluding from the mandates plans that the states would have to pay for. The result: Consumers who buy individual or small group plans may not get the mandated benefits that are required in large group plans. (Self-funded plans, used by many large employers to pay employee claims directly rather than buying insurance for that purpose, aren’t bound by state mandates.)

By the group’s count, 37 states and the District of Columbia have mandates requiring autism coverage. In 26 states, autism coverage is part of the essential health benefits, typically because coverage was mandated before 2012 and so was included in that state’s “benchmark” plan that sets the standard for coverage there.

New mandates are different. “For the most part, the states that have passed autism mandates post Dec. 31, 2011, have excluded ACA-compliant plans from the mandate,” Unumb says.

States have taken different approaches to structuring new mandates so they don’t have to pay for them, says Justin Giovannelli, a research fellow at Georgetown’s Center on Health Insurance Reforms, who has examined state laws in this area. The law may say that the mandate only applies to large group plans, for example, or that it doesn’t apply to any plans that are required to provide the essential health benefits. A state may say that if the mandate increases premiums by a certain percentage the provision doesn’t apply.

“Your state has passed a law but everything is so market specific it’s hard to know what coverage you’re getting,” says Katie Keith, research director at the Trimpa Group, a consultant for autism and other advocacy groups.

Although some states are trying to sidestep having to pay for new mandates by limiting which plans are included, advocates say uncertainty about who is going to have to foot the bill is having a chilling effect overall.

Last year, the California legislature sent a bill to Gov. Jerry Brown that would have mandated that large group plans cover fertility preservation services such as freezing eggs or sperm for cancer patients and others who are facing medical treatments that might cause infertility.

The governor vetoed the mandate, even though the state would not have been required to pay for it because it didn’t apply to small group or individual plans. In his veto message, the governor said that “we should not consider mandating additional benefits until we implement the comprehensive package of reforms that are required by the federal Affordable Care Act.”

“It’s bad for consumers in many respects,” says Barbara Collura, president and CEO of Resolve, an infertility advocacy group. “Because of the uncertainty [about state payment obligations for mandated benefits], no one really knows how this will work, and uncertainty causes people not to want to do anything.”

This story has been updated to correct Justin Giovannelli’s title.