In separate House and Senate hearings, Obama administration officials got an earful from members of Congress and industry and consumer representatives, who want more clarity about regulations called for in the health law. 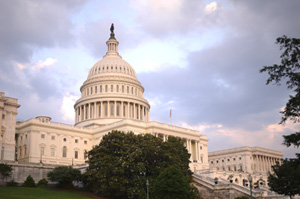 >>Listen to the interview.

JACKIE JUDD: Good day, this is Health on the Hill, I’m Jackie Judd. With the election just about two months away, much of the debate over health care is playing out on the campaign trail, however, members of Congress are still having their skirmishes over the health care overhaul law on Capitol Hill. Kaiser Health News senior correspondents Jay Hancock and Mary Agnes Carey covered two of those events, or skirmishes, yesterday. Good morning to you both.

JACKIE JUDD:  Mary Agnes, you went to a House Ways and Means subcommittee hearing on insurance exchanges which are supposed to be up and running in the beginning of 2014, what was the focus?

MARY AGNES CAREY: Employers and insurers told the panel they want more certainty from the administration on the rules and the regulations governing the health law – things like setting up these health insurance exchanges. How will the subsidies work to help people buy coverage? What’s the minimum benefits package and what happens for example if a state doesn’t want to run an exchange and the federal government steps in?

Well, the administration has issued bulletins, guidances and FAQs – a series of those. The panelists said, “We really need those regulations because they really have more of the force of law, and we need them now.”

JACKIE JUDD: And what was the administration’s explanation for not having the actual rules in place?

MARY AGNES CAREY:  They said they’ve really gone to a great extent to talk to all the stakeholders and they want to take that input and produce those regulations in due time. They also reminded the panelists, and the audience listening in, that states have until November to say whether or not they actually want to run an exchange. So once they know how many states are involved, then they can decide when the federal government has to step in and in what states.

And also, they’re talking about more regulations coming out in early 2013. So one statement that was made was, “Look, if we get to the spring of 2013 and these regulations aren’t out, then we’ve got something to worry about. But with enrollment starting in the fall 2013 and the exchanges up and running in 2014, we’ll still have plenty of time to give you the certainty you want.”

JACKIE JUDD: Jay, you covered a roundtable on the Senate side. In a way, the subtext was the same: Some frustration with implementation of a part of the Affordable Care Act. This was about the Physician Payment Sunshine Act, a little-known part of the overhaul law. What is the Act about and what was the discussion about?

JAY HANCOCK: The Act is a requirement, with bipartisan support, to make pharmaceutical companies and medical device companies reveal the payments that they make to physicians. This has been going on for a long time, it’s sort of part of the culture. It ranges from everything from research grants, to payments for physicians to do clinical trials, to very trivial things such as a pharmaceutical sales rep buying doctors a lunch in their office. This is pushed by Republican Senator [Charles] Grassley and it is in the law — he voted against the law, actually, but he wants this to go forward, as does the industry. In that respect, it’s similar to the exchange hearing that Mary Agnes covered. Everybody wants to go forward.

JACKIE JUDD: Jay, the rules were due almost a year ago. CMS, which is responsible for implementing them and making them, hasn’t moved yet. So, I presume there was a lot of frustration expressed there.

JAY HANCOCK: There was a lot of frustration, from everybody. Not just industry, but from the senators and from consumer groups. There was a CMS representative there. Niall Brennan, the policy director, said “Look, this is complicated, we’re working on it we’re getting input from the stakeholders and we’re going to do it as soon as we can.” He implied that next year is when the first data collection will be required, when publication will happen after that of the data so everybody can go through it and see what’s going on, is still very much up in the air.

JACKIE JUDD: Is there concern about how that data, once it is collected, how it will then be reported out?

JAY HANCOCK: Yeah, that’s one of the many sticking points in getting these regs written. The doctors are very concerned about you know having the appearance of taking money from industry when, in fact, what they would argue is that it’s for you know very productive and innocent reasons. For example, if a research grant is made to a physician group will the data indicate that most of the grant went to pay for actual research expenses, rather than simply being pocketed by the physician themselves. They’re very concerned about appearances in that respect.

JACKIE JUDD: A quick, final question for each of you.  Mary Agnes, you can go first.  And that is, it’s clear that nothing of real substance will happen between now and the election in November.  Congress is kind of treading water here.  So, what is the purpose of these kinds of forums?

MARY AGNES CAREY: Well, both Democrats and Republicans yesterday sort of came back to the political evaluation of what was happening. Republicans said the administration’s inability to issue these regulations is simply just the mirror image of something they’ve talked about for a long time –Republicans that is — that the administration crafted and passed the law in a very rushed, sort of secretive manner, they’re also implementing it without a lot of examination, and they’re not moving quickly enough.  Democrats sort of mirrored those remarks and said this is just another opportunity for Republicans to stand up and criticize a health law that they don’t like that is now the law of the land.

JAY HANCOCK:  My impression is that the roundtable on the Physician Payment Sunshine Act was less an exercise in stagecraft and more an expression of really genuine frustration on behalf of all the parties.  At one point, Senator Grassley, said ‘Look, we’re Congress, we passed this law, we gave you a deadline.  Why do we even exist if you’re not going to implement our regulations?’  And industry and consumer groups expressed sort of the same thing.  Everybody wants this law to go forward. Industry has some concerns about how it’s going to be implemented, but, above all, they just want to see the rules so they know what they’re going to have to do.

JACKIE JUDD:  Okay, thanks to you both, Jay Hancock and Mary Agnes Carey. I’m Jackie Judd.