>> Listen to the conversation. 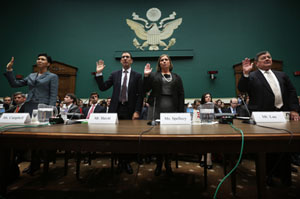 Members of the House Energy and Commerce Committee grilled their witnesses for more than four hours in a session that is the first of several House Republicans have planned to look at what’s behind the recent problems consumers have been experiencing with the site.

Jennifer Haberkorn of Politico Pro was at the hearing and joins us now.

MARY AGNES CAREY: Healthcare.gov represents 36 state exchanges. It seems as if an awful lot is on the line here.

JENNIFER HABERKORN:  Oh, absolutely. The Obama administration likes to say now that Obamacare is “more than just a website.”  But for all intents and purposes, all the political conversation — and, in fact, the policy conversation — is focused on this one website.

MARY AGNES CAREY: Several of the witnesses who were at today’s hearing also appeared before the [House] Energy and Commerce Committee last month and they said the site was on track to launch Oct. 1. How was the testimony different today?

JENNIFER HABERKORN:  Well, each of the contractors were asked if they stand by their Sept. 10 testimony. And they said that they all do. Republicans pointed out, though, that at that time they seemed to indicate that more testing had already been done than, in fact, had been done. We found out today that much of this testing wasn’t done until two weeks before the Oct. 1 launch date.

MARY AGNES CAREY: So what did these computer experts identify as the major problems with the site that they saw during development? Did they talk about when they told federal officials about the issues, and did the federal officials take, in the opinion of the witnesses, take the proper steps to correct those problems before launch?

JENNIFER HABERKORN:  This hearing launches a lot more questions than answers. We really didn’t find out what the major problems are because each of the contractors would only talk about his or her own piece of the website, which is a collection of different people working on difference pieces. But interestingly, one of the developers, QSSI, said that it warned CMS that several of the tests were failing, but then they left it in CMS’ hands to do with that what they wanted to. CGI, the main contractor, said that it really had no place to recommend whether the federal government go live on Oct. 1 or not. They really put the blame and the accountability on CMS.

MARY AGNES CAREY: And again, CMS being the Centers for Medicare and Medicaid Services, which oversees healthcare.gov, correct?

MARY AGNES CAREY:  Republicans on the panel were very, very critical of the Obama administration and of the website, but how did Democrats respond? Were they also critical of the rollout? What are their concerns?

JENNIFER HABERKORN:  Democrats are very concerned. This is the law that they fought for. They fought to get this through Capitol Hill, and they’ve been defending it for three years. They have a lot on the line of the health care law doesn’t go well. So they had some tough questions for the contractors as well. But most of their fury, if you can call it that, was directed at Republicans. Democrats accused them of being pretty cynical in Republicans’ newfound interest in getting healthcare.gov to work.

MARY AGNES CAREY: Now this is the first of three hearings. What’s ahead for next week? Who is testifying? What committees will they be testifying [to]? And do you expect to hear?

JENNIFER HABERKORN: We’re in for a lot more long and very heating hearings on healthcare.gov. HHS Secretary Kathleen Sebelius, who was invited to Thursday’s hearing with the contractors but turned that down, she’ll be attending another hearing with Energy & Commerce on Wednesday. And on Tuesday, Marilyn Tavenner, the head of the Centers for Medicare & Medicaid Services, will be going before the House Ways & Means Committee. At both of those hearings, we’re expecting a lot of tough questions about who made the big decisions on healthcare.gov and who should be held accountable.

MARY AGNES CAREY: Are these hearings just political distractions, or will they really make the healthcare.gov website work better for consumers?

JENNIFER HABERKORN: Democrats certainly say that this is more about politics than actually getting the website to work. And they made that very clear in the hearing today. But all the political attention on the flaws is, I have to imagine, prompting the White House and CMS towards, even more critically, to get the website working. So in that regard, it might have some practical implications.

MARY AGNES CAREY: Thanks so much, Jennifer Haberkorn of Politico Pro.