MARY AGNES CAREY:  Welcome to Health on the Hill, I’m Mary Agnes Carey. The troubled Medicare Physician payment formula is one step closer to repeal. After 17 short-term fixes over the last decade, the House of Representatives voted overwhelming to scrap Medicare’s Sustainable Growth Rate, or SGR, and replace it with a system that pays doctors based on the quality of care rather than the quantity.

The Senate is expected to act on the measure next month. Jennifer Haberkorn of Politico Pro joins us now with the latest. Thanks, Jen. 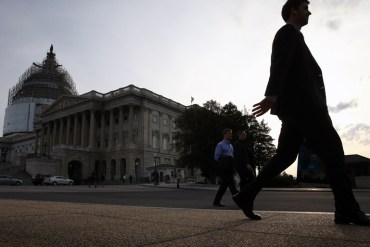 People walk past the U.S. Capitol Building on Thursday in Washington. (Photo by Mark Wilson/Getty Images)

MARY AGNES CAREY:  The House voted 392-37 to pass an SGR overhaul. President Obama supported this plan and there was a lot of pressure on the Senate to act, but it didn’t. Why didn’t the chamber vote on the SGR bill before it left town for a two-week recess?

JENNIFER HABERKORN, POLITICO PRO:  The Senate was wrapping up its “vote-o-rama,” which is a purely Washington term for 15 hours of straight voting on amendments to the budget. Some hoped, and some thought that they would then move to this and pass this Sustainable Growth Rate repeal immediately. But the Senate feels like they have some time – the Obama administration can delay Medicare payments, essentially delaying the cuts to doctors, for two weeks. So they have time to return to this and pass it before physicians would actually see a cut in their rates.

Also the Senate really wanted to amend this policy. It was passed by the House, they were kind of miffed that they weren’t involved. So they want to be able to vote on making some changes to policy. Those amendments are unlikely to be approved, but they want to be able to make a point. There was also some concern that they didn’t have enough time to read the legislation and then all of the budget votes, and they were skeptical of passing this at about 4 in the morning.

MARY AGNES CAREY:  The Senate doesn’t come back until April 13, and that leaves a lot of time for lobbying on this package – maybe people who like it, people who don’t. What are you expecting?

JENNIFER HABERKORN, POLITICO PRO:  Traditionally in Washington, the more time you have, the more opportunity there is for opposition to fester. That should be a concern in this case because it is two weeks before the Senate returns, but the House vote, as we said, was overwhelming: 392 votes. Advocacy groups are pretty overwhelmingly supportive of it. And I don’t see any real opposition brewing unless something new comes out – something unexpected like there’s a provision in the bill that no one realizes was there or something really significant like that. So I see the next two weeks – physician groups putting some lobbying time into ensuring the Senate vote is as strong as possible.

MARY AGNES CAREY:  You mentioned Senate amendments a moment ago. What sort of amendments are we likely to see when the Senate takes up this package?

JENNIFER HABERKORN, POLITICO PRO:  The Senate really wants four years of funding for the Children’s Health Insurance Program. The policy right now is only two years and they want to be able to vote on doubling that to four. I don’t think that is likely to pass, particularly because it is a pretty expensive policy change. We are also likely to see an amendment on a budget point of order, which is really just acknowledging that this policy is not fully paid for, so it would add to the deficit in the first ten years and particularly conservative budget hawks would like to be able to voice opposition to adding to the deficit.

MARY AGNES CAREY:  Let’s go back to that House vote for a minute. Just want to get your impressions, I mean I found it so interesting that House Speaker John Boehner could convince many conservative Republicans to vote for this, even though as you say it wasn’t fully paid for. Nancy Pelosi the Democratic leader also got her troops mostly to go along, even though they had concerns, same concerns as Senate Democrats about the Children’s Health Insurance Program funding, there were some concerns that beneficiaries are picking up too much of this package. How did that all come together?

JENNIFER HABERKORN, POLITICO PRO:  I think a couple really strategic decisions by leadership were key. Conservatives were able to get the early support of Americans for Tax Reform, which is really influential with conservatives who are concerned about the budget. That kind of quelled some of that opposition. Nancy Pelosi very early on made it clear that she wanted more money for the CHIP program, but just wasn’t going to be able to get it in this deal.  And so, that really tapped down opposition from the far ends of both sides, Republicans and Democrats.  Also, this policy was just so widely hated that there was a lot of support for getting rid of it even if you had to accept some things that you didn’t like.

MARY AGNES CAREY:  Do you think that House vote, coupled with the likely Senate action on the sustainable growth rate scrapping this formula once and for all, is this a sign that we are going to see more bipartisan cooperation on health care in the future?

JENNIFER HABERKORN, POLITICO PRO:  You know, it’s certainly a sign that it’s possible. Whether we are going to see more of this, it’s really hard to say at this time.  This deal seemed to come out of nowhere. You know, we’ve been doing “doc fixes” like you mentioned earlier for a decade. No one thought the policy would going to get repaired anytime soon. And it was perhaps less about health care and more about just this recurring, very Washington, problem of fixing this budget problem.  But I will say, this was the number one policy concern of just about every physician organization, a lot of the hospital organizations because they were always taxed to pay for these doc fixes. So it kind of clears the plate of health advocacy organizations and helps health policy people on Capitol Hill.

MARY AGNES CAREY:  We’ll see were it goes. Thanks so much Jennifer Haberkorn of Politico Pro.

JENNIFER HABERKORN, POLITICO PRO:  Great to talk to you.

Health On The Hill: No Senate ‘Doc Fix’ Vote Before Recess. Will Break Hurt Chances?